OFFICIALLY TOGETHER: Tommy and Miho on It’s Showtime’s TOMIHO A Love Realiserye

WATCH: Alden Richards and Maine Mendoza ‘Wipe Away the Hate’ in Joint Master and Eskinol TVC

PBB All In Housemates and Their Celebrity Lookalikes

Among the local celebs in the country, who do you think has the slickest-and-smoothest dance moves? Here, we’ve listed 15 of our favorite makalaglag-pangang artista-dancers:

Raise your hands if you agree with us – we feel this boy wants to make it really big in show business. And whenever he’s on stage, he just gives his all. Plus, he has that charming “totoy-ako-noon, bagito-na-ako-ngayon” look which adds to his overall charisma on stage.

Once dubbed as the “The Bad boy on the Dance Floor,” we’ll go gaga if we see Mark in a club, dancing… on the dance floor. We’ll definitely approach him and say–while pumping our chests up and down really hard a la Jennlyn Mercado–“Hey bad boy, I’m Jennifer, let’s get on the floor. Aaa la la la la lalalalala la laaaa. Tonight we gonna be on the floor!” We’re pretty sure he’ll buy that and dance with us.

While growing up in her former home network, the empress of hip hop has learned the ropes pretty well when it comes to BIG dance prods. If you are sharing the same stage with other bigger stars like in “ASAP,” well, magpakitang gilas ka na! Try to outperform everyone else. And Empress is very good at that – pump, pump, turn, swish to the left and now to the right, ikot-ikot, pas de burre, pas de burre, turn, leg extension…now split – she surely knows how to shine despite the competition. Si Empress pa, shuck na shuck ‘yan!

Billy oozes with sex appeal whenever he dances–despite putting on, then shedding off, then putting on weight (again). Who can ever forget his pop hits like “Trackin” and “Bright Lights,” which paved the way for his international career during his younger years in France, the United States and the United Kingdom. Today, he has connected even more with the madlang people with his whimsical dance numbers in their “Billy-Vhong” segment in “It’s Showtime.” Don’t we all wish we can be his Coleen Garcia for at least a day?

The one and only queen of GMA 7, Marian is the epitome of a mala-diyosang beauty and she shines even brighter with her dancing heels on. Throw her some mambo, salsa, “I saw the sign,” “Bubble Butt,” or whatever dance tune you can think of, and she just delivers–and she does it regally. Can’t help but notice her angelic face and curvaceous figure too while unabashedly smashing those preppy moves on TV.

One of the few underrated dancers (and actors) in the business we love is this young handsome chap who, hopefully, will slowly-but-surely gyrate his way to fame. Although his fellow contemporaries, Erich Gonzales and Jason Abalos, have turned out to be household names now, our little Aaron is still trying to prove his worth in his home network. Push pa natin, Arron. Giling pa more.

Known to many as “the older and hotter brother of Rayver,” Rodjun proves to be more ogle-worthy than his younger sibling. We often see Rodjun now half-nekkid on national TV; he takes off his shirt almost every week. We really don’t mind. No, not at all! Pa-order nga ng kanin, please.

Super Selfie King, Gab, is a comical and a much more frisky version of his dad, Mr. Pure Energy Gary V. He dances like there’s no tomorrow. He bobs, he leaps and he twirls. And the best part is, he jigs his slender body effortlessly a la Beyonce-trapped-in-a-Michael-Jackson-body.

Rayver probably has the most unique dancing style among the local artistas. His krumping precision is always snappy and he floats on stage with so much grace. His bones though–parang makakalas na any time. Ingat lang kuya! Kain-kain din pag may time. Sayang ang mga projects.

Shaina has a face of a perfect Mediterranean barbie doll: seductive and endearing. And whenever she performs, we often catch ourselves cursing–fowchanginaymo, ang ganda niya! Watching her perform makes us want to throw the TV sets outside the windows or better yet, just plainly kill ourselves (kidding!). Kainggit, kairita… ikaw na… Shaina!

It’s the King of the Gil; the only person who inspires us to dougie without looking too jeje. Kris Aquino describes Enrique in the most truthful way possible–“lalakeng-lalake” siya sumayaw! We found a new matinee idol in Quen and we don’t mind seeing him often with his provocative dance moves coupled with the winks, the tongues and the booty shakes. Enrique, teach me how to dougie, teach me teach me how to dougie…

Enchong is our top male dancer only because of his palpable upper body and solid core, which works to his advantage when he does the male version of Iya Villania’s daredevil and acrobatic routines on ASAP. Those slow back flips, one-hand cartwheels, and dolphin dives… Enchong, nakakanginig ka ng laman!

Maja-rot: that’s the perfect term to call her seductive and alluring dance style. She moves her hips na parang suman na binabalatan; an unbelievable torso gyration which will humiliate even Shakira. Her body roll and chest pops need to be patented too. And wait till you see her “Dahan-Dahan” music video, winner ka talaga teh!

The pop star royalty will always-and-forever be our top choice when it comes to giving all-out performances on stage. Despite the high notes, upbeat tempos and the nonstop ikot-ikots, Sarah never loses confidence and composure even during live sing-and-dance acts. Sa iyoooo… pa din ang korona!

Who do you think deserves the number one spot in this list? Vote in our poll below:

Who is the Best Aritista-Dancer in Philippine Showbiz Today? 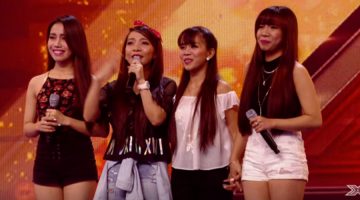