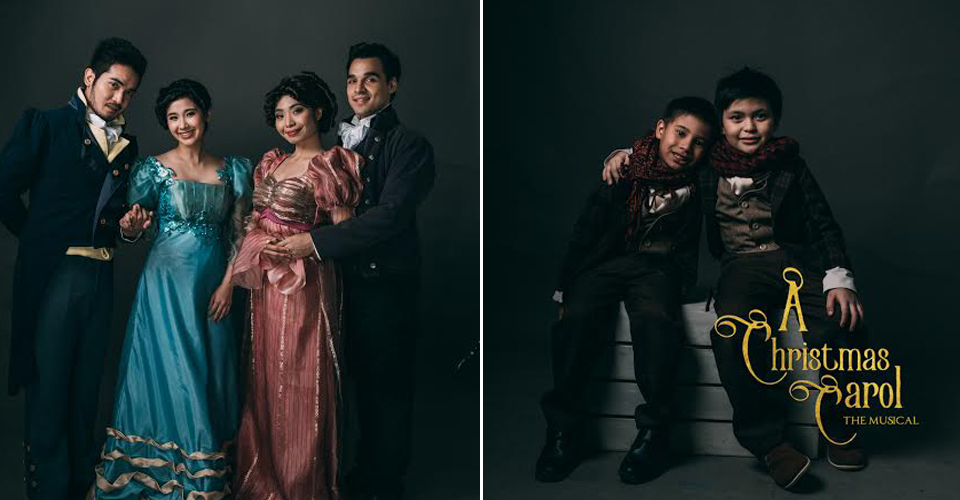 This Christmas, 9 Works Theatrical and Globe Live present the long-running acclaimed showA Christmas Carol: The Musical from the award winning team of Lynn Ahrens and Alan Menken. First staged in December 1994, the beloved Charles Dickens classic A Christmas Carol is brought to life through song and dance in this musical extravaganza. 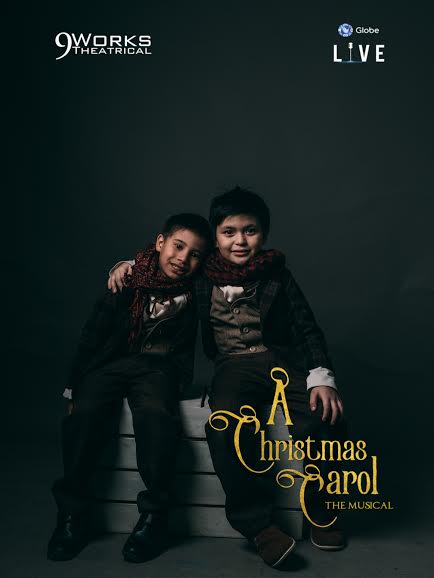 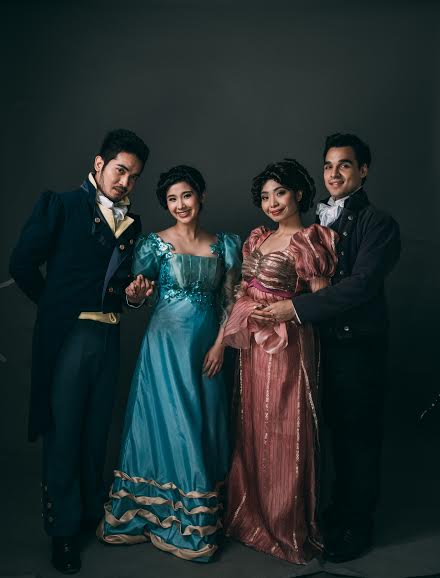 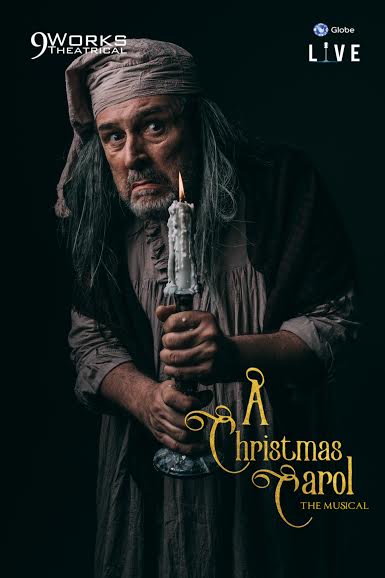 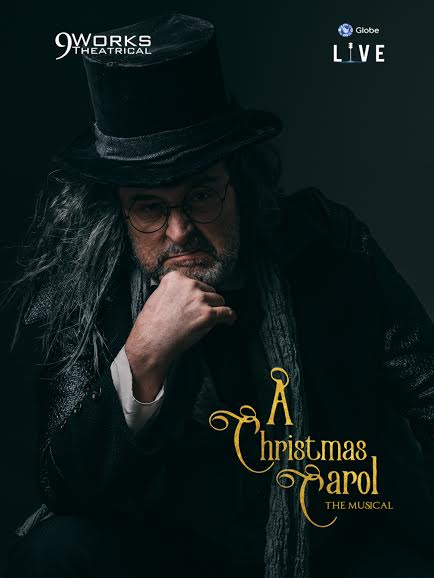 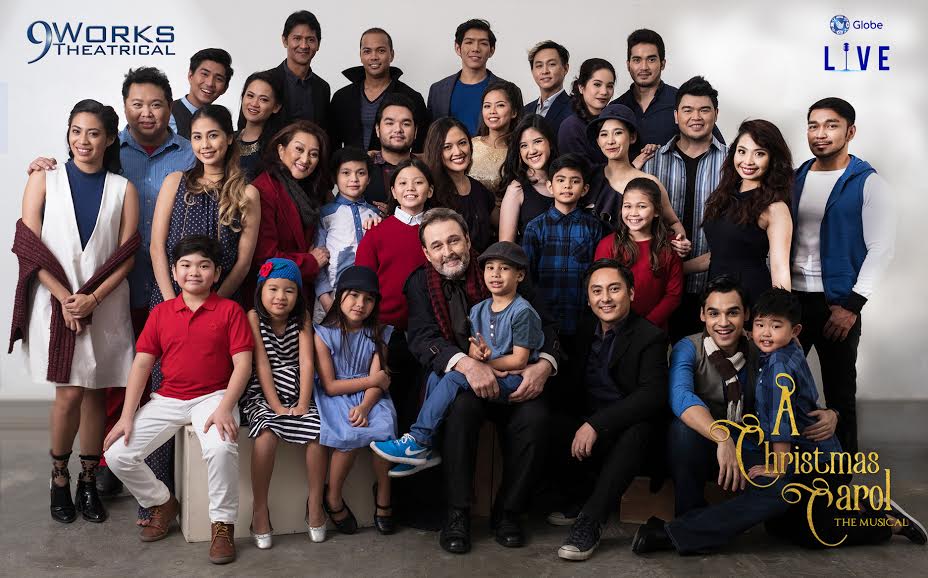 A Christmas Carol: The Musical is the story of Ebenezer Scrooge, a bitter miser who hates Christmas. He even calls Christmas a “humbug!”  The musical is the story of his journey of discovery to what Christmas is truly about. Playing the titular role is theater veteran Miguel Faustmann. He began his theater career with Repertory Philippines in 1974 and has transitioned to film, television, commercials, and even directing and set design. He has recently been awarded a Lifetime Achievement Award by the Aliw Awards in 2015. In an effort to show him the true meaning of Christmas, ghosts visit Scrooge. His business partner, Jacob Marley– who possesses exactly the same characteristics as our protagonist– visits him. He will be portrayed by Ariel Reonal, who just ended his critically-acclaimed turn in 9 Works Theatrical’s staging of Tick, Tick…BOOM! Ariel Reonal spent the last two years in the West End Revival of Miss Saigon and can be seen in its cinema release.

Followed by Marley, Scrooge is then visited by the Ghosts of Christmas Past, Present, and Future. Norby David, Franz Imperial, and Ela Lisondra play the three ghosts, respectively. Norby David is known as part of the band Overtone and as the co-vocalist of Rivermaya (2011-2016). He made his theater debut in the 9 Works Theatrical and Globe Live hit, American Idiot. Franz Imperial was a principal vocalist for Hong Kong Disneyland, Universal Studios in Singapore, and DreamWorks Movie Animation Park. In theater, he has been in such plays and musicals as Little Shop of Horrors, Pinocchio, and most recently in Shrek The Musical. Ela Lisondra is the 2013 World Champion in the World Salsa Festival and 2012 Champion of Best Dance Crew inthe jazz/contemporary division. She has performed internationally in Paris, Belgium, Macau, Hong Kong, and London. Her musical theater credits include the West End revival of Miss Saigon and 9 Works Theatrical and Globe Live’s American Idiot, where she garnered a Gawad Buhay citation for Best Female Featured Performer for her role as the Extraordinary Girl. The world of A Christmas Carol: The Musical is not just filled with ghosts and a miserly old man who hates Christmas. Also in the story are Bob Cratchit and his wife, Mrs. Cratchit. Bob Cratchit is a hardworking family man who is often abused by his employer, Scrooge. Playing him is Raul Montesa, whose theater credits include La Cage aux Folles, Miss Saigon (Germany, Manila, Hong Kong, and Singapore), Into the Woods, Man of La Mancha, The Secret Garden, and many more. Anna Santamaria, who left her corporate career to pursue a life in theater, plays Mrs. Cratchit. Her credits include Fiddler on the Roof, Cinderella, Noli Me Tangere, They’re Playing Our Song, RENT, and many others.

Scrooge has a nephew, his only living relative, who is filled with good cheer and Christmas spirit. Playing Scrooge’s nephew, Fred, is Nel Gomez, whose has received a Gawad Buhay citation for Best Lead Actor in a Musical for American Idiot. His other theater credits include Romeo and Juliet, Confessions of a Teen-age Blockhead, and many more. As Scrooge visits his past, he sees a younger version of himself. Portraying the younger Scrooge is Al Gatmaitan, who is a much sought after theatre, film, and television actor. He began his training at the UP College of Music and furthered his studies in Italy for three years and joined Spazio Teatro and Teatro Calabria. He has the distinction of winning second place at the first Filipino European Pop Song Festival in Reggio Calabria, Italy. Jun Ofrasio and Dawn Eduave will take on the role of Mr. and Mrs. Fezziwig. The Fezziwigs love throwing Christmas parties and Mr. Fezziwig was Scrooge’s first boss and taught him everything he knows. Jun Ofrasio began his work in theater with Tanghalang Pilipino in the early 90s and had since then been in such productions as El Filibusterismo, Noli Me Tangere, Illustrado, Baby, Camelot, and was part of the cast of Miss Saigon in London, Ireland, and Portugal. Dawn Eduave’s theater credits include The Wedding Singer, Cinderella, Evita, and Camelot.  The youngest member of the Cratchit family, Tiny Tim, may be crippled and sick but he is the epitome of what Christmas is all about. Playing him is Dewayde Dizon, who started joining competitions and contests since he was in pre-school. After a fourth place finish at the Grand Finals of Sta. Lucia Little Stars contest, he began modeling for commercials and appeared in shows like Rated K. Alternating with Dewayde Dizon is Rocco Buser, who will be making his theater debut as Tiny Tim. 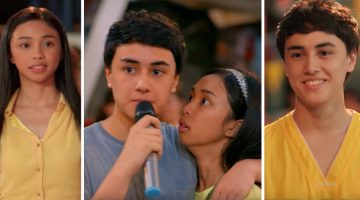