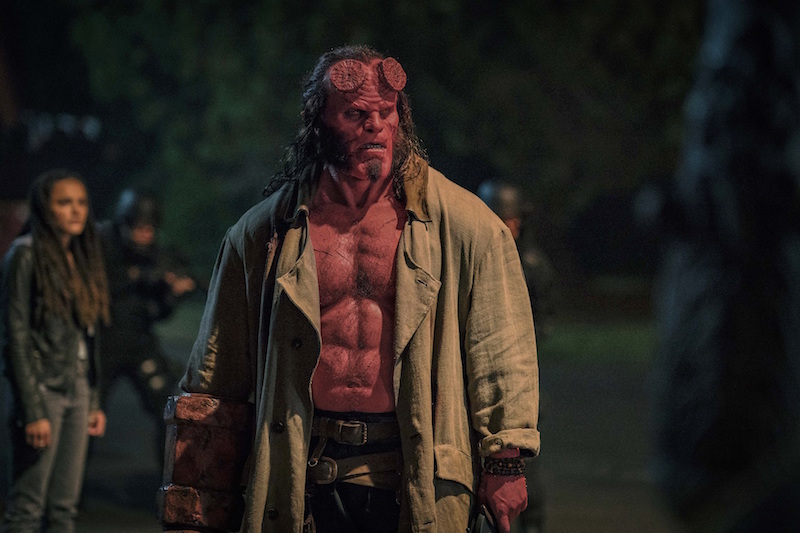 “Hellboy”, the legendary half-demon superhero is back this April, but not as a continuation to the 2004 and 2008 fantasy-heavy Hellboy films by visionary writer/director Guillermo del Toro.  Instead, this movie reboot has a darker tone, much more grounded in horror (Rated R in America), and is composed of a new cast and a new creative team that includes Mike Mignola, the creator of the “Hellboy” comic books, acting as a co-executive producer.

Now directed by award-winning director Neil Marshall (Dog Soldiers, The Descent, Game of Thrones), and stars two-time Emmy Award Best Supporting Actor nominee David Harbour (Chief Jim Hopper in Stranger Things) in the titular role, Hellboy is seen being called to the English countryside to battle a trio of rampaging giants.  This is part of his job in the government organization called B.P.R.D. – Bureau for Paranormal Research and Defense.

While in pursuit of the giants, Hellboy encounters Nimue the Blood Queen, played by the stunning Resident Evil star Milla Jovovich.  This vengeful 5th century sorceress wants to get him on her side so that together they can end mankind.

While the movie will show some explanation on the background of Hellboy – that he was  summoned from the depths of hell on a stormy island off the coast of Scotland – it begins right in the middle of the action.  It is also “truer to the comic” , says Mike Mignola, “in that Hellboy’s been out in the world, not a top-secret, hidden away guy”.  He has a “been there, done that vibe”, a trait that Mignola patterned after his father, a Korean War veteran.

David Harbour says, “In our movie, he’s very much dealing with his own being ostracized from society.”  He is a lot more “emotionally explosive” compared to the Hellboy version of Ron Perlman.  Harbour expounds, “It’s a classically complicated hero. He’s a creature that was meant to bring about the end of the world, and he just sort of wants to be a good guy. He’s got that complexity to him. He’s also a monster who lives among human beings, so he’s in a sense fighting for human beings against his fellow monsters, and yet the humans hate him because they fear him and they think he’s weird-looking and everything.”

Having a big role in Hellboy’s life is Trevor Brutteholm, his adoptive father and founder of the B.P.R.D. Played by Golden Globe Best Actor Ian McShane (Deadwood), his version of Brutteholm is “a much harder character who doesn’t sympathize with Hellboy questioning his place in the world”.

McShane calls it “nice and bittersweet” taking over the role from “his dear old friend” John Hurt, but he was pleased to have worked with Harbour in Bulgaria for three weeks.  He is proud to say that the filmmakers “picked the right guy” in Harbour.

As for Nimue the Blood Queen, she is depicted in the comics as a witch from Arthurian Britain who was cast out and trapped underground for 1500 years.  This could be the reason she’s thirsting for vengeance.

In response to what kind of power her character has, Jovovich says, “She is able to throw plague and sickness on people.”  In spite of this, the actress believes that the Blood Queen is “terribly misunderstood”.  She explains, “The Blood Queen’s plan is so beautiful, something that all people want to achieve and it’s actually very relevant to what’s happening in our world.  It’s trying to bring people together even though they are very disparate communities, monsters and humans, and bring the world into one so that everybody is protecting each other…I come in peace.  It’s not my fault I’m a strong woman.”

Being “a powerful and strong woman” was actually Harbour’s first impression of Jovovich whom he had only known from movies like The Fifth Element.  And because of that, the actor admitted to be “a little worried” working with her, but upon meeting her, he discovered that “she is such a pro” and he enjoyed the “level of love” she has for making a movie.

Other characters that are appearing for the first time are Alice Monaghan, played by Sasha Lane (American Honey) and Ben Daimo, played by Daniel Dae Kim (Lost, The Divergent Series: Insurgent), Hellboy’s companions in saving the world.

Monaghan is depicted as a woman of Irish descent who retained some magical abilities after she was kidnapped by fairies as a baby.  In the comics, she was rescued by Hellboy from her kidnappers.

Daimo is a Japanese-American military member of B.P.R.D. who acquired the power to transform into a jaguar when angered or in pain after a supernatural encounter.

“Hellboy” is filled with incredible action and Harbour prepared well for it, saying that “It’s the most physical role (he’s) ever played.”  Hollywood trainer Don Saladino put him through “a rigorous 10-week boot camp, involving kettlebells, medicine balls, machine weights, dumbbells, and weighted sleds—and that was just to kick things off”.

Harbour says, “I put on a lot of muscle and I got really strong and a lot of the training was power, because there’s a lot of stunts in the movie. There are two amazing Bulgarian Olympic wrestlers who did most of the Hellboy stunts, but there still was a lot of close up stuff that I had to do.” 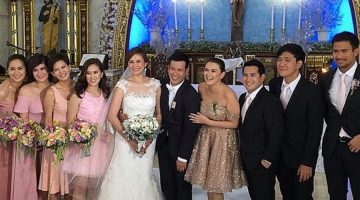