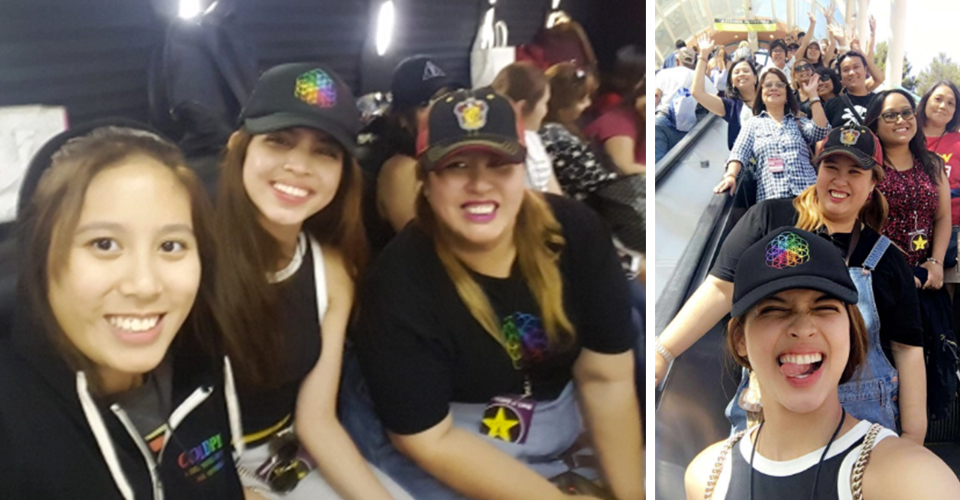 Eat Bulaga’s phenomenal star Maine Mendoza (1/2 of AlDub loveteam with Alden Richards) just got back in Manila today from the United States. Maine went on a quick break to watch her favorite band Coldplay‘s concert in Los Angeles, California. In the said quick trip to the US, Maine managed to squeeze in a day to spend with her US-based fans. Those who joined Maine during her Universal Studios Hollywood trip with her older sister Coleen were the ones who patiently waited for her at the Los Angeles airport when she arrived last Sunday. One of her fans, Carmi (a.k.a. @huggable_me), a blogger, shared her firsthand experience with the phenomenal “Yaya Dub.” 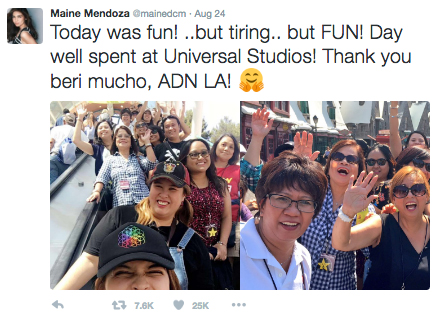 In her blog post entitled Maine Day!, Carmi happily described her memorable fangirl experience as MAGICAL. She shared that it was Maine who reached out and invited the  LA-based fans for a day-out as the star’s way of saying thank you for the support and warm welcome at the airport (which Maine knew required so much effort and patience due to her delayed arrival!).

Below are some highlights of Carmi’s post:
“I want to share our experience with of all of you, not to dangle ourselves and make you inggit but rather give you another angle on how we saw Maine through our eyes, through our day with her because after yesterday, my love and respect for her just went up a hundred fold more.”
The theme park plan, according to Carmi, had two major rules:
1) No photos or videos
2) Just have fun.

“Maine wanted to experience the trip to Universal just like any other tourist. To enjoy the attractions, have fun on the rides. And yes though that took a lot of self-control on our part, we were happy to oblige. We told each other that it should only be Maine and Coleen to post pics and that we would do ours at the end of the day. Heck, kasi naman to be able to have 5 minutes of alone time with her would have already been such a blessing! So we made a pact that we would do everything we can to make her and Coleen enjoy their day. So we planned everything, what to do, where to eat plus a big surprise for them at the end of the day…”

“…Another thing that I’ve discovered? Maine really has the gift of being ‘Funny.’ One snap of a finger and she is able to make all sorts of faces, think of incredibly crazy antics. It was natural of her. Do you remember the Dora snap? Si Dora nataranta! Di sya prepared so she asked for a Take 2 for the Nae Nae dance haha Maine was already in performance mode, she wasn’t haha o di ba san ka pa?”

“As the day ended, we were getting tired. I’m pretty sure that Maine and Coleen still had jetlag but they were such troopers and just carried on. Since Maine posted her snaps a lot of people were already making their way to Universal. But you know what no matter how tired she was, she made it a point to stop and take a picture with every person who approached her. As much as we wanted to protect her, she was just gracious and mabait and she will not let the fans down. I really, really admired her for it.”

“And as we left the park, Chaos erupted as excited fans were at the excited waiting for her. Tourists can be heard talking amongst themselves asking, “Who is she?” “Is she some kind of celebrity?” It proved to be a feat just to escort her out but Maine still happily obliged to smile and pose for pics. There were even foreigners who was mesmerized by her so they too took photos of her! Cool noh?? That’s our Menggay! Actually, initially there was an American family who approached her too, I think their nanny was Pinoy and she lets the kids watch KS so they knew her even the mom! Maine was so surprised they knew her kasi as in Caucasian sila. We were all beaming with pride for our Menggay!”

Carmi and the rest of the group had a surprise for Maine and her sister Coleen:

“…We rented a 25-seater Coaster Party Bus. They needed a ride back to the hotel so instead of everyone fighting as to who gets to bring them home, we thought, all for one and one for all!? Sama2x till the very end!”

“I have seen and experienced being with Maine Mendoza and if I haven’t said it enough, I am saying it again. She is as real as real can be. Sabi nga nya tao din naman sya napapagod, nasasaktan. As much as we all want to put her at a pedestal, she is still just a girl in her 20s enjoying life. She likes to have fun, to go crazy, to enjoy.”

“A lot of people put her under a microscope and try to dissect every move she makes but please guys, as any other celebrity, they are just like you and me too. Like I said earlier, she does see the tweets so can you imagine how she feels when w bicker and fight? How many times has she said to stop the hate? Did we really listen? If you are truly her fan, you would respect her wishes. Because your actions hurt her too because you are a reflection of her. Think about that.”

“Si Menggay? Grabe she really is so talented. She is able to think about her antics so easily. My tummy was hurting the whole day kakatawa. Grabe she got me to do the Mummy Ride 2x kaya haha when she did those pics with Marilyn, I swear nawawala si Marilyn sa character the minute she catches a glimpse of Maine making faces. It was just so adorable. And alam nyo mabait sya talaga. As in. On our way to their hotel, we got our one on one pics with her and had her sign stuff. She was super tired and we were telling her na later na pero she said No go lang po and just did them non-stop. I was the last kaya I appreciated it more kasi nahihiya na ako umaapproach pero sabi nya ate go lang. Wow di ba?? She makes you feel so important, so appreciated, so loved. How many celebrities can you say that can make you feel that way?” 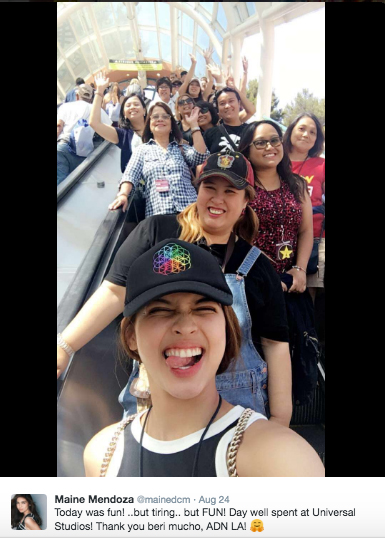 “Oh and may tumawag while we were on our way to dinner. Nagvideo call to say hi. Sikwet!!!!”

Her special message to Maine Mendoza:

“And to you Maine, Meng, Menggay…

Thank you. Thank you for this wonderful opportunity to hang out with you. I am literally blabbing here but still I don’t think I got out the right words to say. Like I mentioned before, never in my wildest imagination did I ever think that I’d have my Tamang Panahon with you now. For about a year I expressed my inggit with everyone in the Phils. My groupmates in the Barakos and Sakololos were already able to go to Broadway or the Baranggay. I was always jealous. Being Team Abroad it was more of a dream. A dream that you’d just always pray for fate to step in for it to happen.

And indeed Fate stepped in.

None of us will ever forget this day. You made us feel not like fans but friends that you just wanted to have fun and share the day with. We will always be grateful for this. My love and respect for you just got elevated into a new high. You have touched each and everyone of us in such a magnificent way. As Tita Issa said in our prayer at the Party Bus, we will always be praying for you, loving you and supporting you in everything that you and Alden do. We love you very much and you have also bonded us into a mini-family. Team LAX will forever be solid from now on. And we shall carry on the tradition of hanging out. Disneyland perhaps?? At saka kahit kalat na kalat na mukha ko at ang double chin ko at ang katabaan ko kebs na talaga kasi you guys were so worth it!!!

You are indeed the best queen ever. There is no one like you. And I am still at awe because everything I wrote about you, everything that I imagined you to be WAS. You are such an amazing woman. I salute your parents for raising such fine children.

Fame and popularity didn’t get to you. You are even more grounded and more humble than ever.

And this is what I want everyone to know and appreciate. Maine Mendoza really is unique because she is real, she is unpretentious, she is unassuming and she is humble. She is just like you and me and that is her charm. She came with us on this day not wanting to be treated as a celebrity but as a friend. And for all of us, to be able to let her have fun and enjoy for real is the best feeling of all. I looked at her snaps and indeed she was happy and that makes my heart sooo happy. (Sobs)

We love you Maine so so much. Thank you once again. Till we meet again!” 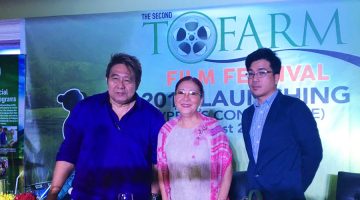