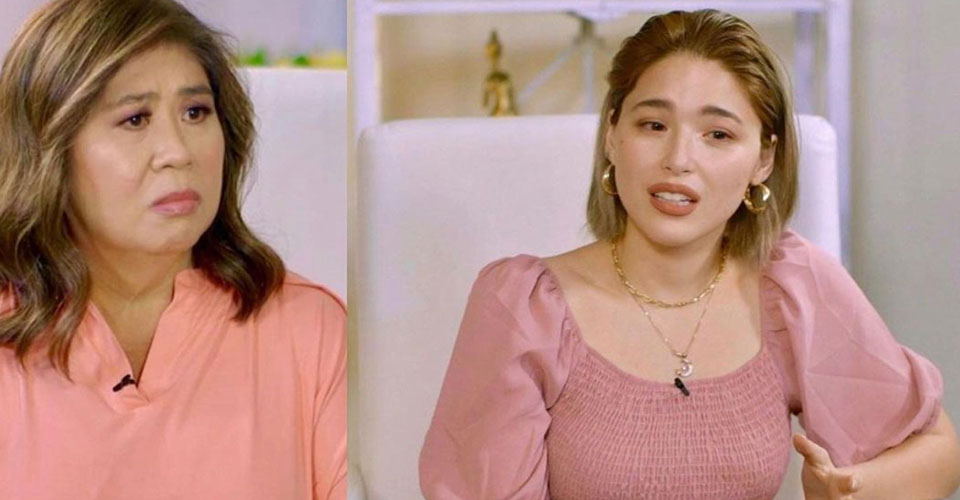 GMA artist Kylie Padilla broke her silence on the internet’s hottest topic last week – her husband Aljur Abrenica‘s viral Facebook post that left speculations and a series of other issues. She chose to air her side of the story through top-rating news magazine program, Kapuso Mo, Jessica Soho. The episode was shown earlier tonight.

“Honestly, I’m doing good. I just moved into a new house so I’m doing really good,” this was Kylie’s response to multi-awarded host and broadcast journalist Jessica Soho when asked how she is these days. Soho pointed out that Kylie did not look like she was going through something.

The Kapuso actress replied, “Kailangan kasi, may mga anak ako eh na nakatingin.” As much as possible, she said, she wanted to spare her sons from the negative impact of the controversy.

Soho apologized for having to probe into something very sensitive and personal but said she was aware that Padilla also expressed her desire to be heard.

When Soho pointed out that the allegations seem to be quite strong, Padilla responded, “Ang dami kong puwede sabihin na ikakasira niya ’cause we were both in the marriage. But I chose to keep quiet na lang about the details. Hindi naman makakatulong sa ‘min eh. He knows what he did wrong. I know what I did wrong.“

Where it all began

Padilla went on to backtrack a bit and said that all these began with her cryptic posts in February this year that led to the public knowing about their marital woes. She explained, “But for me kasi that time, I was suffering. I didn’t know how to handle what I was going through and I’m sorry, I learned from that mistake. If we do wanna blame each other, maybe we can do it in the right place, not on social media.”

In response to the challenge posed by Abrenica for Padilla to tell the public who wrecked their family and who cheated first, Padilla said, “If I say my side, hindi siya makakatulong. So, in some way, I’m still trying to protect what I can. Kasi ayoko talagang tuluyang gumulo kasi lalaki ‘yung mga anak ko, mapapanood nila ‘to, and ayokong makita nila. As a mother, I have to protect what I can. I promised not to cry, but you know..”

With her voice breaking, Padilla turned teary-eyed but continued her piece. She added, “I know my truth eh, I know what I went through, and I know what he went through. And ang alam ko lang, parehas kaming hindi masaya.”

The actress expressed her readiness to go into a legal battle if it is needed. She continued, “And if we play the blaming game, what are we gonna get with trying to attack each other online. I mean, who is it helping? Let’s do it in court na lang. Kung gusto mo ng ganyang labanan.”

“Tell them who wrecked our family.”

Padilla confessed that she was terribly hurt by the accusation of destroying her own family. “Na-hurt ako sobra sa sinabi niyang I wrecked the family. Hindi ko inexpect ‘yun because we had an agreement. Sabay tayong magpapainterview para at least after nito kahit maghihiwalay na tayo, we’re still a united front. Inisip pa rin namin na family kami,” she remarked.

When Soho asked if she had any defense to present, Padilla was quick and firm in saying, “In my defense, while we were formally married, I never had extramarital relationships with other men. That is my truth! Okay sana kung ginawa ko I would say ‘I’m sorry’ pero hindi talaga eh. That’s what they keep throwing at me. Paano akong aamin sa bagay na hindi ko naman ginawa?“

On the alleged third parties

As the issue blew up, Soho said several names have been dragged into it. Some actors have been suspected by spectators as the third party. Padilla responded with a light mood, “Natatawa na lang din ako. Actually, nag-usap na kami ni JM diyan eh. Natatawa na lang kami.“

She was referring to JM De Guzman whose name cropped up in several posts and comments about the issue. Padilla cleared the actor’s name with confidence.

When the issue of Abrenica being linked to other women as well was brought up, Padilla confirmed, “There are three women that came out. ‘Yun na lang ang sasabihin ko. It shows a lot why I chose to end it. Kasi I wanna grow. I wanna grow as a person. And I wanna be a better mother. Sa circumstances sa marriage namin, parang feeling ko hindi ko magagawa ‘yun.”

She added, “‘Yung sinabi niyang I wrecked the family? It’s because I decided na ayoko na. And I wanna be a better person. I wanna be happy. I want him to be happy. Kaming dalawa ‘yung iniisip ko when I decided that. If you ask him now, he agrees.”

Padilla explained that she thought everything was okay until the controversial Facebook post happened. She said, “Okay ‘yung mga nangyari kasi happy na siya. Happy na ako. So, I’m confused about why he’s doing this. ‘Cause we both agreed.”

One of the names dragged in the issue for the past couple of weeks is newbie actress and celebrity daughter AJ Raval. AJ is the daughter of ’90s action star Jeric Raval who recently admitted to being wooed by Abrenica. In fact, fan-shot videos of Raval and Abrenica openly strolling together inside a shopping mall recently went viral.

When Abrenica’s Facebook post was a trending topic earlier this week, Raval shared the post on her official Facebook page but eventually deleted it. Soon after, the daring actress posted a TikTok video apologizing to the public and Padilla for sharing the post. Raval clarified that it was not her intention to hurt anybody and said that she was just protecting herself.

To the apology, Padilla responded. She said, “I actually wanted to talk her. Kasi napagdaanan ko rin ‘yan. ‘Yung nababash ako kasi nililigawan ako. And I wanted to talk to her, to help her out on how to handle it. Para maiwasan lang ‘yung nangyari ngayon.”

While she understood where the budding couple was coming from, Padilla also expressed what she felt they could have done instead. She added, “But I wish na iningatan na lang nila. They can’t blame me for that, too, because we had an agreement that we can both see other people. I wish you guys were more careful. Don’t blame it on me.“

Padilla went on to share that the decision to end the marriage was hard for her. She explained, “I believed in making it work eh. But I felt like for the longest time I felt alone in the marriage. ‘Yung cheating was just the last straw. Ang daming nangyari which is why I can’t say kung anong lahat ng ‘yun because I’m trying to protect nga what I can. Mahirap sa ‘kin pero I said, ‘Okay, it’s enough.'”

Soho did not forget to seek Padilla’s explanation on her recent cryptic post with a quote from American singer Rihanna. It was published as an Instagram story soon after Abrenica’s post spread like wildfire.

Padilla laughed and admitted, “Napagalitan ako ‘dun. In that moment, I was reckless. For me to post that. But it’s just how I felt ’cause sinabi niyang ako ang unang nag-cheat. So unfair! People don’t know what happened. Talagang maniniwala sila. And so I posted that.”

Padilla shared that her two sons with Abrenica were not spared from the marital drama. She said, “They witnessed some of it, the last few months of our marriage which is also isa sa mga dahilan kung bakit nag-choose ako to end it na lang. Gusto ko na iwasan na tumagal na nakikita nila ‘yun ’cause I don’t want them to think na normal ‘yun sa isang relasyon.”

Later into the interview, Padilla was asked if her dad Robin has spoken with her about the issue. She replied, “Hindi ko pa siya nakakausap eh. But I think he wants me to handle.“

Soho recounted that Padilla was at the peak of her career in 2017 when she got pregnant and had to be taken out of GMA’s hit series. Asked if she regretted anything, the Encantadia star said, “Hindi. Kasi si Alas ‘yung nasa tiyan ko noon eh. I wanted to be a mom,” Padilla replied. Padilla and Abrenica got married in 2018.

Was Aljur worth it?

Padilla also came to Abrenica’s defense and paid tribute to him for taking care of her back then. She related, “We were so good during that time. Sobrang ‘yun ‘yung the best times during our relationship kasi we’ve been together for 10 years na, married for three. Noong mga time na ‘yun, inalagaan niya talaga ako. Naappreciate ko siya as a husband, as a person, lalo na during those days.”

When asked if the marriage was worth it, Padilla responded with positivity. “Ayoko kasing gawing negative lahat eh. There were good moments din naman eh and I don’t wanna throw them away. Kahit papaano, in my kids, there’s still a part of their dad. I want them to see their dad in a good way. Para kapag nakikita ko ‘yung mga anak ko, ‘Uy Tatay niyo ‘yun, you should be proud,'” she explained.

Toward the end of the interview, Padilla was asked if she had any message for her ex. She said, “Huwag nating kalimutan to be parents sa mga anak natin. And sana ma-save pa natin ‘yung friendship after this and kung gusto natin mag-away or whatever, let’s do it in the right place, huwag na sa public. ‘Yun lang hinihingi ko, please.”

As the interview came to a close, Soho commended Padilla for her strength and complimented her works of art. The host jokingly said, “Your paintings are good pero medyo dark.” Padilla responded with a laugh.

“Liliwanag din ‘yan,” Padilla beamed. She reassured Soho that she is doing well and just wants to put an end to the issue.

Similarly, Abrenica came out with a fresh statement yesterday, October 23, through a live press conference for an upcoming project. He acknowledged having posted what he posted out of impulse and expressed his desire to also put an end to the issue. After all, he said, they are still family. 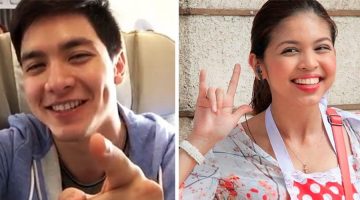