REAL to REEL: Will showbiz couple Diego Loyzaga and Barbie Imperial make it ’til the end of ‘DULO’?

Behind-the-Scenes: Alden and Maine’s Prenup Photoshoot for the Faulkerson-Mendoza Wedding

Doing face-to-face campaigning as a show of support is a love language. This is what we witnessed between actress-host Maine Mendoza and Quezon City District 1 (QCD1) Congressional candidate Arjo Atayde.

With only a couple of weeks remaining in the campaign period, Arjo surprised the people of QCD1 with the presence of Maine Mendoza who joined him and several members of Team Aksyon Agad in a motorcade that roved around the district where thousands of people came out in support of Atayde. Dr. Doray Delarmente, Joseph Juico, Charm Ferrer, Bernard Herrera, and TJ Calalay are all running for Councilors of QCD1.

“I love doing house to house rounds and visiting the different barangays of District 1 as it gives me a more intimate and personal connection with the people,” says Arjo who topped the most recent survey of Istratehiya Inc. by 74.9% vis-à-vis his opponent who scored 25.1%. “I love interacting with the people face-to-face while still following all safety protocols of course. I get to see their faces while talking to them and learning about how they live and knowing their needs first hand.”

The celebrity power couple created such a fun and lighthearted frenzy as this was the very first time that Maine appeared and joined Arjo in his campaign.

To the delight of countless fans and loyal supporters, Arjo and Maine spent time with them from Vasra in Visayas Avenue corner Elliptical Road to Project 6’s Road 1 and Visayas Avenue to Bagong Pag-asa to Mindanao Avenue to Barangay Alicia in Ilocos Sur and Ilocos Norte. 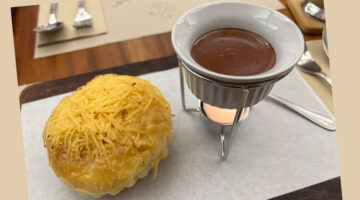