Senator Tito Sotto Challenged to a Debate on RH Bill

Kate and I recently visited Mystery Manila in Libis, Quezon City with my sister and another friend to try one of their mystery rooms. Out of the three possible adventures, we decided to take Justice for Jamila, a 60-minute game that centers on the murder case of Jamila, a private investigator of a rich CEO (Mr. Miguel Castillo).

Here’s a teaser video and the first clue you will receive upon entering the mystery room:

We initially thought we’ll be able to finish the game in half an hour or less. But it was tougher than we thought! If you’re good enough to be on top of the leaderboard, you must complete the mystery in less than 17 minutes. Our team (#RandomRepublika) took a whopping 57 minutes to find the suspect and gather enough evidence to justify who Jamila’s killer was. The good news is, we still managed to solve it. Mystery solved!

What can you expect from the game: You will be given a single clue once you start. Upon entering the room, you will see different items that will both distract and also lead you to your next clues – from torn maps, a drawer full of newspaper clippings, calendars with encircled dates, a planner notebook with Jamila’s personal notes, etc. A clock is also hanging on one of the walls so you can determine how much time you have left. What made it also more heartpounding was the suspense music playing in the background.

There will also be one moderator who will be assisting you inside if you need help where to find the next clues. And if you’re lucky, a handsome Kuya will be there to guide your team. Spell: PRESSURE. By the way, this cute Kuya’s name is “K” (short for “Kris”).

What we learned from Mystery Manila: Unless your teammates are completely useless, each one will and should definitely play a role during the game. In our case, Kate was good in solving riddles and in matching letters, characters and passcodes. We relied on JP in finding hidden items in odd places like clues under the tables. Denise was good in analyzing details and understanding clues found in newspaper clippings and maps. I, on the other hand  was the group’s cheerleader and was the one who constantly asks clues from cute Kuya moderator.

Prizes: Yes, you get rewards for finishing the game on time such as t-shirts or pens. Since we are close to the one hour time limit, we still received prizes in the form of cute little black stickers.

Will we try Mystery Manila again next time? Big YES – but maybe the Jupiter branch next time! The game definitely tested our patience, wits and teamwork. If you’re into competitions that involve fun and logic, this is a good place to bring your family members and friends.

A group of teenagers at Mystery Manila Libis

Where to find Mystery Manila: 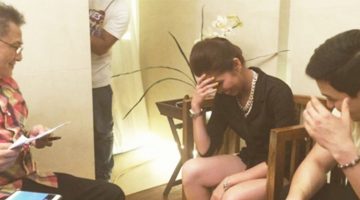