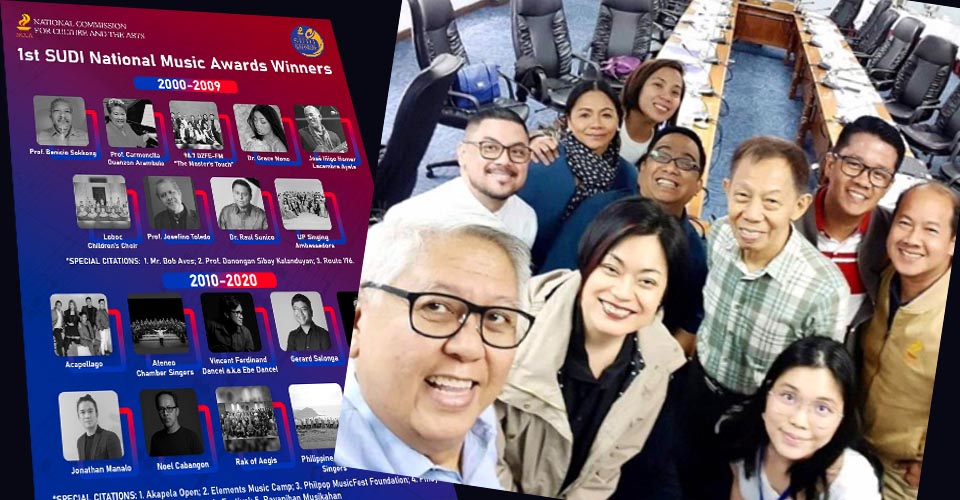 “Hindi nila inaasahan na sa panahon ng pandemya makakatanggap sila ng awards, head of the NCCA National Committee on Music, Dr. Felipe De Leon, laughingly shared the common reaction of the recipients of the 1st NCCA SUDI Awards. True enough, in a media conference held via Zoom, some of the awardees validated the statement as they expressed the surprise they experienced and the gratitude they feel. One thing consistently surfaced from their speeches – the honor and emotional upliftment the award brings at this time of crisis.

The National Commission for Culture and the Arts launched the NCCA SUDI Awards with the aim to recognize outstanding contributions of Filipino musical works, creators, institutions, and researchers across genres and modes of productions with the highest standard and artistic excellence.

For its launch year, 2020, the SUDI Awards will recognize and honor the nineteen (19) most outstanding musical achievements (whether artist, musical piece, journal, music cultural worker, or music institution, but not limited to) that defined the last 20 years or past two decades.

The awarding ceremony for the 1st NCCA SUDI Awards will be livestreamed via NCCA’s official Facebook page and YouTube channel (@NCCAOfficial) in two parts on August 21 and August 28 at 7PM.

Here are some of the awardees present during the mediacon:

Prof. Toletino said during his quick speech, “Kahit walang awards, patuloy kaming lilikha.“ He represented the whole group in saying that it is passion and not recognition that drives them to do what they do and contribute what they offer to society. He did note that it gives them joy that their efforts are not left unnoticed.

The word “SUDI”, which is an Ilocano adjective meaning illustrious renowned, celebrated, or famous, was proposed by Dr. Felipe M. de Leon, Jr., a member of the technical working group and head of the NCCA National Committee on Music.

A credible jury was tasked to review the body of work and/or significant contribution of the nominees’ that ultimately formed the nineteen (19) significant musical achievements that defined Philippine music during the years 2000-2019 while still adhering to the highest standards of excellence (in form and in content) and even in audience reception and patronage.

In succeeding years, excellent and significant musical contributions (whether artist, musical piece, journal, music cultural worker, or music institution, but not limited to) shall be recognized triennially.

Learn more about the NCCA SUDI National Music Awards and the list of awardees. Visit: https://ncca.gov.ph/2021/02/02/ncca-sudi-awards/

The National Commission for Culture and the Arts (NCCA), Philippines is the overall policy making body, coordinating, and grants giving agency for the preservation, development and promotion of Philippine arts and culture; an executing agency for the policies it formulates; and task to administering the National Endowment Fund for Culture and the Arts (NEFCA) — fund exclusively for the implementation of culture and arts programs and projects. 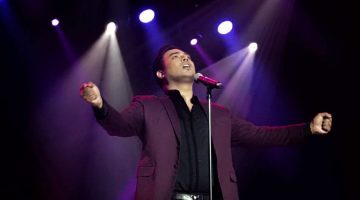 Jed Madela’s US Tour: SOLD OUT