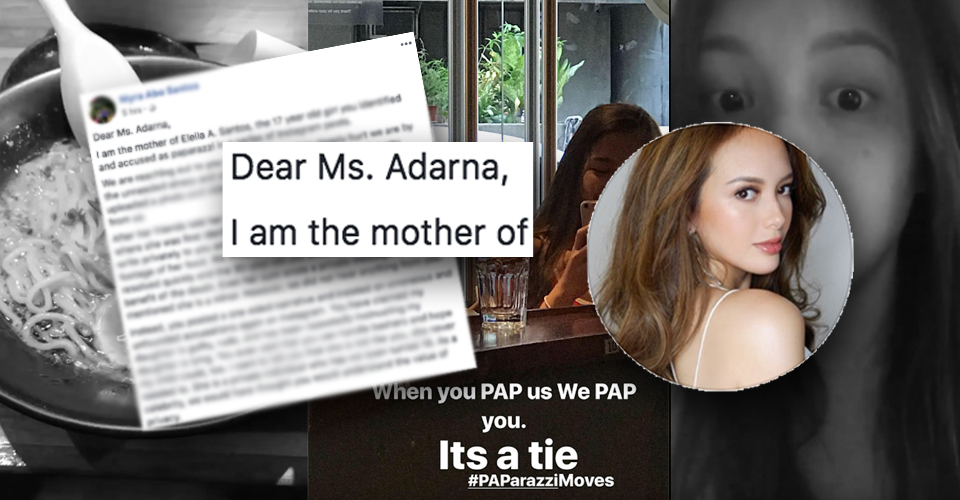 Last Saturday, social media went abuzz with Ellen Adarna‘s Instagram story exposing a girl she claimed to be taking a ‘pap‘ or paparazzi shot of her and live-in partner John Lloyd Cruz at a ramen place in Makati City. The post elicited a reaction from the concerned individual. 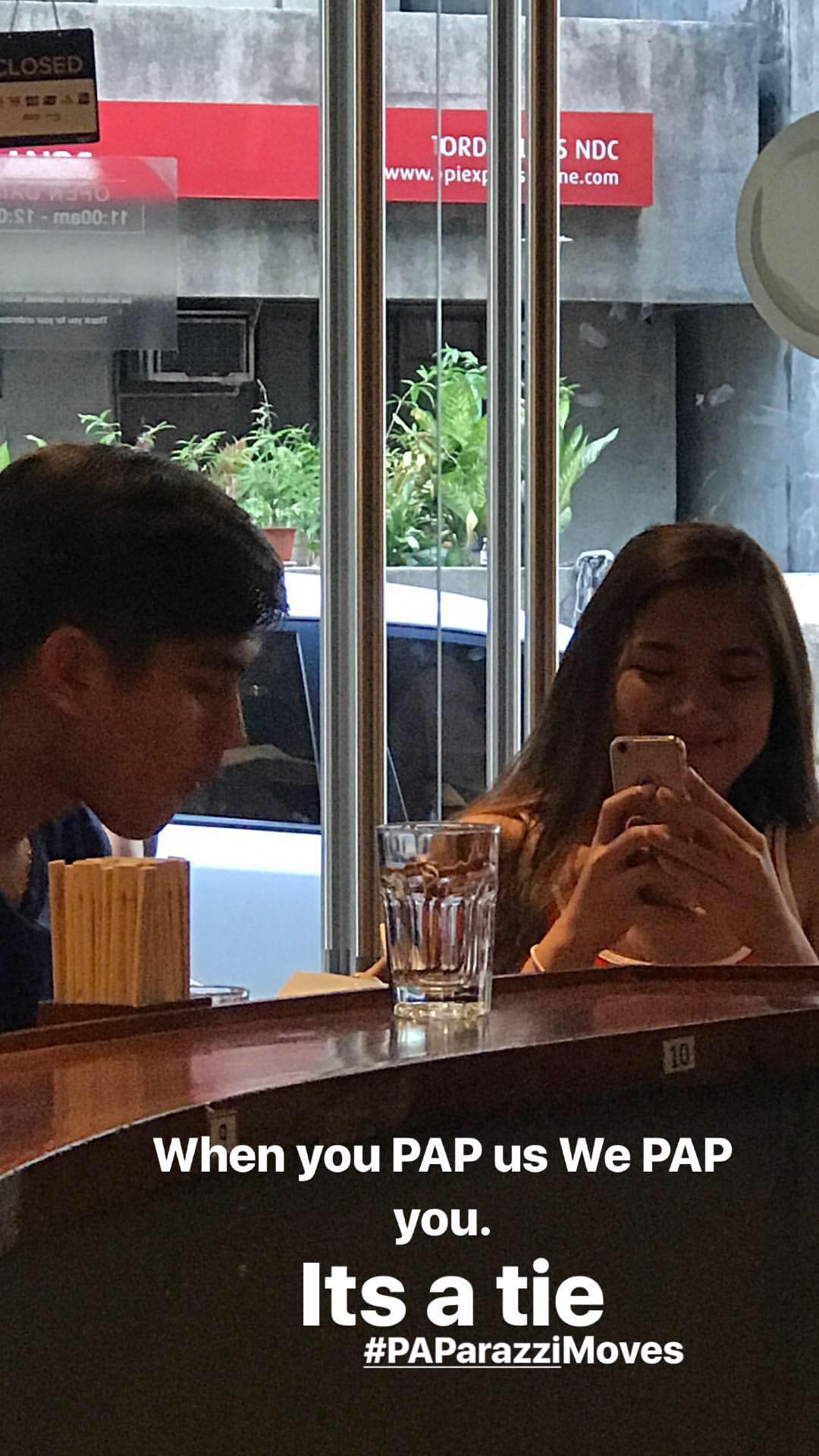 Hours after the said post, the girl featured in the photo denied the allegation and shared her side of the story on Twitter. The girl named Eleila Santos made a counterargument and said she was just taking a video of her food to be uploaded as an Instagram story. Eleila uploaded the said video on Twitter as reference. 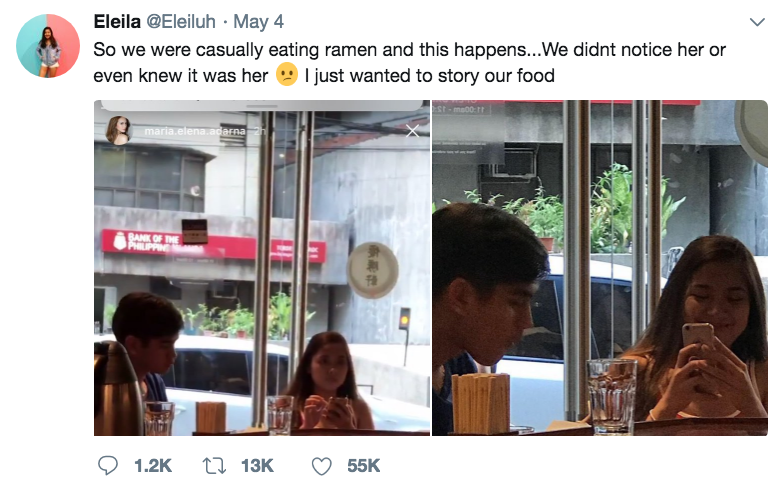 Her tweets (start from the last): 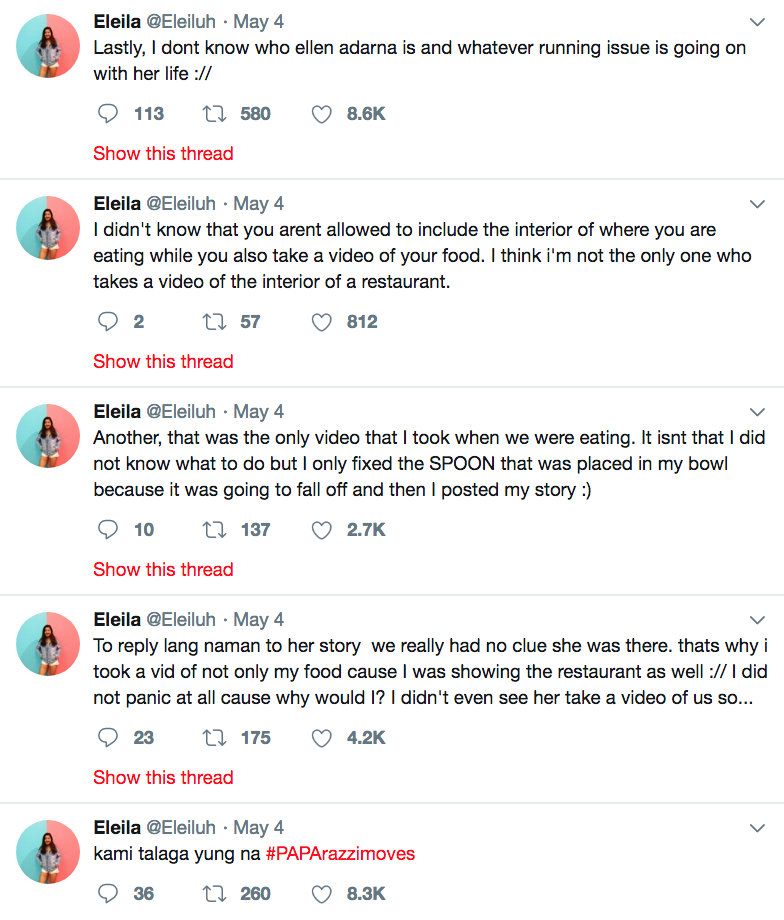 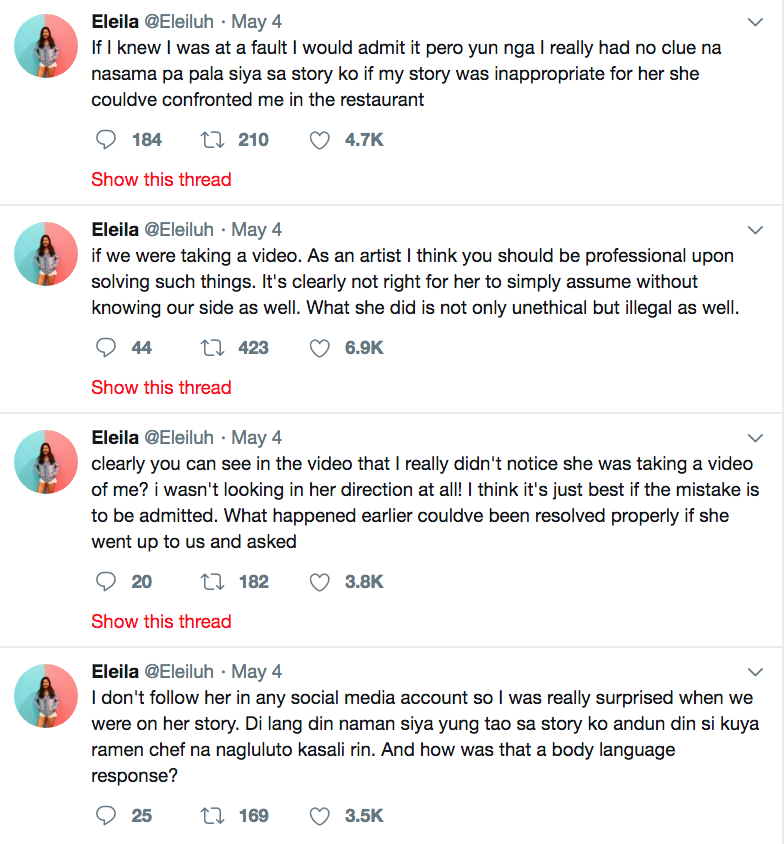 Ellen reacted to the girl’s response with a series of videos uploaded on her IG story section. Here are the videos + transcript.

WATCH the video with all the supporting details at the end of this article. 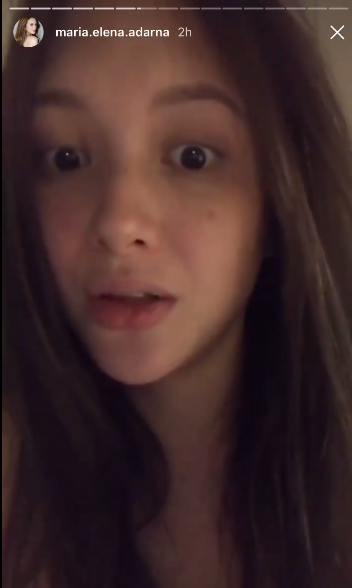 “Girl, your reaction in the video that I took explains it all. Like, you look so guilty, you didn’t even know what to do, if you should pick up your chopsticks. You look so conscious because you panicked, because you know I was doing what you’re doing.”

“Girl, you can deny all you want but before your food arrived, you knew what you guys were doing. So, yeah, whatever, feeling na kung feeling, but ‘di kami tanga.”

“‘How rude is this girl?’ and that was before their food arrived. Uhm, and in my head, I wanted to go to her and ask her to delete the video but…”

“So instead of getting bad trip and all, I just decided to reciprocate and did what she did. So, fair lang.”

“And I saw her post, I saw a video that she took that she was casually eating ramen. But then she took  a video. Girl, if you take a video over your food, you focus on the food. You don’t focus or you don’t show people in the background.”

“And when she realized that I was doing what she did, she kinda panicked which you can see in my video. She didn’t even know what to do. She wanted to get her chopsticks, she wanted to do something with her phone.”

“So you can justify what you want to justify and I can do what I want also because I’m patol like that.”

“I just want to say, ‘Hi Elbert!,’ Elbert is my neighbor and he owns Mendokoro and baka he can give me a video footage of what happened, just kidding. Why does your ramen have to be so good? Daming nangyayari… (trails off).”

“Girl, you can stop acting like a victim and know that there’s always two sides of a story and people will always choose a side. So, deal with your bashers because me, I can handle them pretty well. And you know, good luck to you.”

Just when we thought the issue is over, an open letter by Myra Abo Santos to Ellen  is now going viral on Facebook. In the said letter, she introduced herself as the mother of 17-year old Eleila. Santos is asking for a public apology from the actress for what she mentioned as unnecessary stress caused by Adarna’s posting on Instagram. The complainant says she is protecting the welfare of her daughter who happens to be a minor. She also said that the family has begun seeking legal assistance. 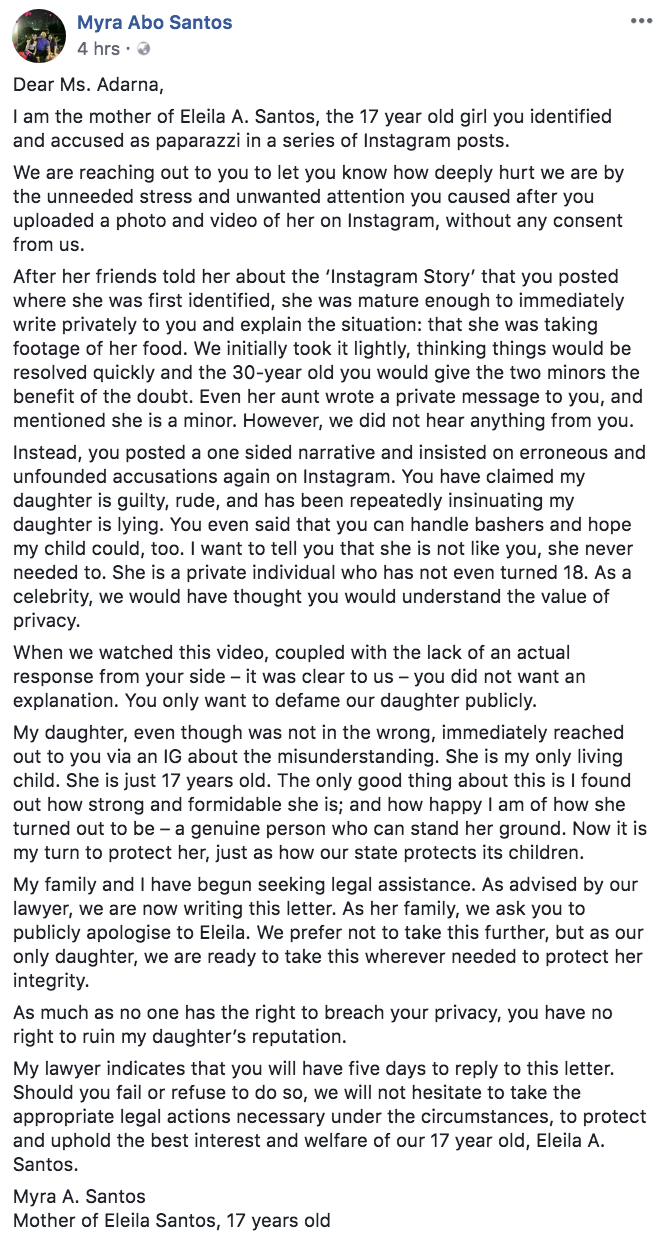 I am the mother of Eleila A. Santos, the 17 year old girl you identified and accused as paparazzi in a series of Instagram posts.

We are reaching out to you to let you know how deeply hurt we are by the unneeded stress and unwanted attention you caused after you uploaded a photo and video of her on Instagram, without any consent from us.

After her friends told her about the ‘Instagram Story’ that you posted where she was first identified, she was mature enough to immediately write privately to you and explain the situation: that she was taking footage of her food. We initially took it lightly, thinking things would be resolved quickly and the 30-year old you would give the two minors the benefit of the doubt. Even her aunt wrote a private message to you, and mentioned she is a minor. However, we did not hear anything from you.

Instead, you posted a one sided narrative and insisted on erroneous and unfounded accusations again on Instagram. You have claimed my daughter is guilty, rude, and has been repeatedly insinuating my daughter is lying. You even said that you can handle bashers and hope my child could, too. I want to tell you that she is not like you, she never needed to. She is a private individual who has not even turned 18. As a celebrity, we would have thought you would understand the value of privacy.

When we watched this video, coupled with the lack of an actual response from your side – it was clear to us – you did not want an explanation. You only want to defame our daughter publicly.

My daughter, even though was not in the wrong, immediately reached out to you via an IG about the misunderstanding. She is my only living child. She is just 17 years old. The only good thing about this is I found out how strong and formidable she is; and how happy I am of how she turned out to be – a genuine person who can stand her ground. Now it is my turn to protect her, just as how our state protects its children.

My family and I have begun seeking legal assistance. As advised by our lawyer, we are now writing this letter. As her family, we ask you to publicly apologise to Eleila. We prefer not to take this further, but as our only daughter, we are ready to take this wherever needed to protect her integrity.

As much as no one has the right to breach your privacy, you have no right to ruin my daughter’s reputation.

My lawyer indicates that you will have five days to reply to this letter. Should you fail or refuse to do so, we will not hesitate to take the appropriate legal actions necessary under the circumstances, to protect and uphold the best interest and welfare of our 17 year old, Eleila A. Santos. 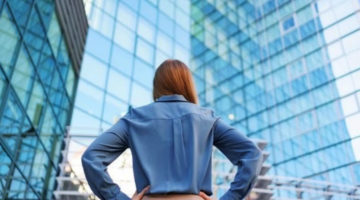