WATCH: Janella Salvador Introduces Elmo Magalona as Someone Who Makes Her Happy at Her ‘SuperJanella’ Digital Concert

Korina Sanchez returns on air via ‘Rated Korina’ on TV5 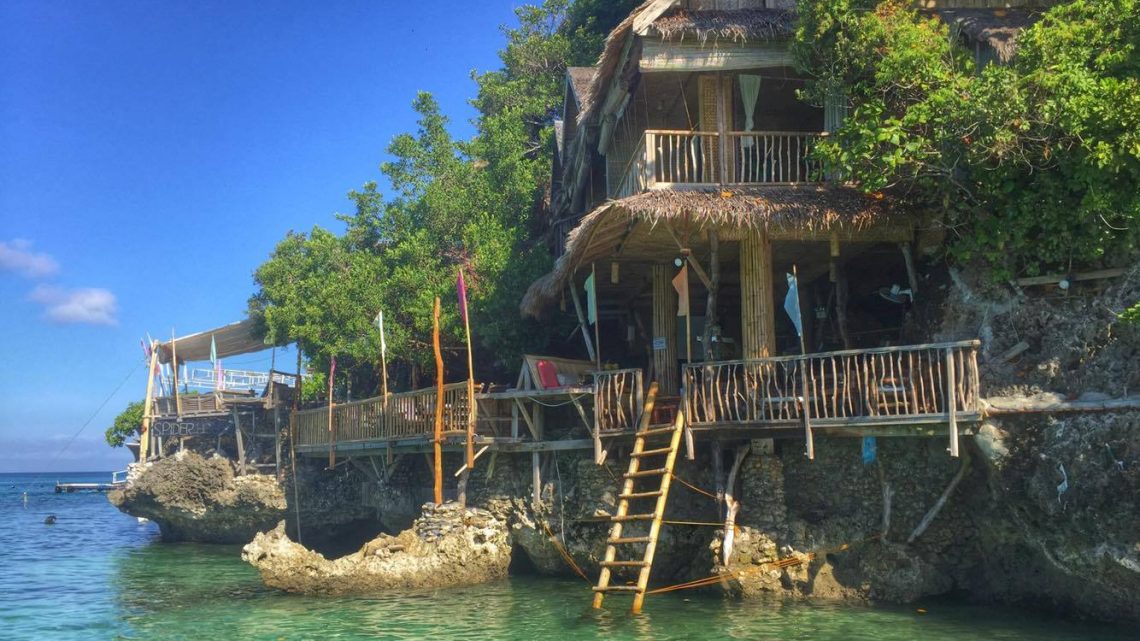 On my fifth visit to Boracay, I felt I needed to explore the island beyond Stations 1 to 3.

I’ve only gone as far as the luxury resorts of Discovery Shores and Fridays. Anything beyond that already seemed too remote. Visiting the rear side, where the local community resides, is an unorthodox story on its own.

One sunny Thursday afternoon, my friend and I decided to just explore and stroll. And so we just walked and walked right before the sun began to set — wearing my slip-ons, sometimes going barefoot, and repeating it in enjoyable cycles — on the island’s white powdery sand. I was sinking and I was floating. I was half submerged and soaked, by the sea and under the sun.

March seemed to be a season for algae as there were plenty swimming by the shoreline. This didn’t stop us though to have fun by the beach. 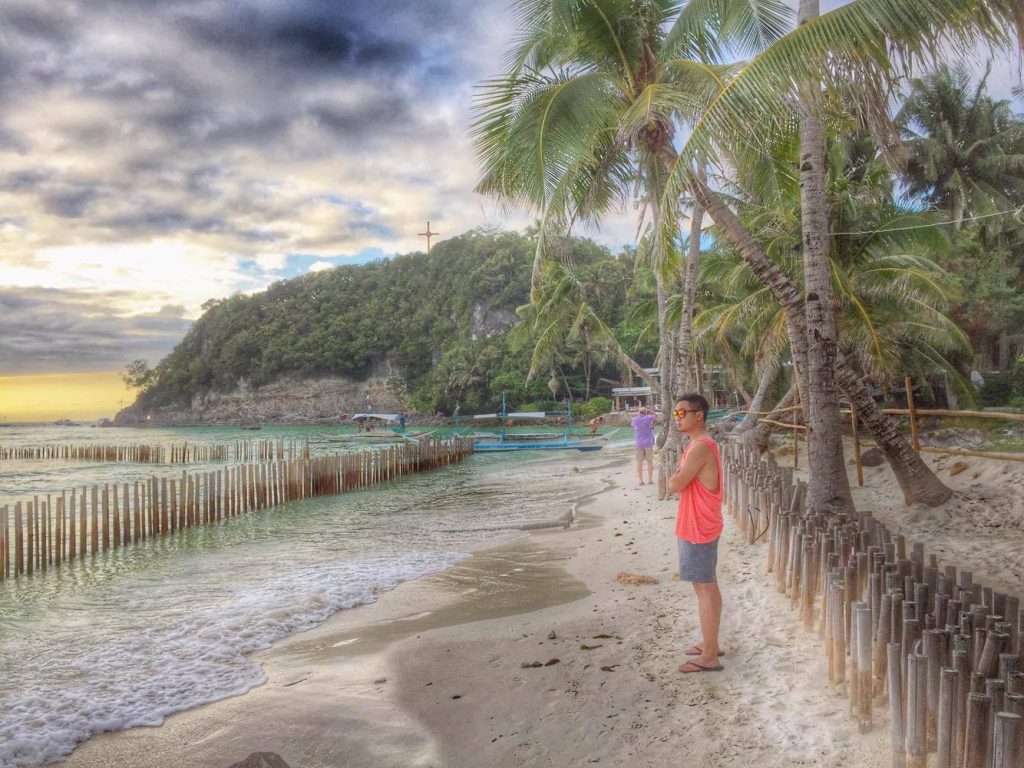 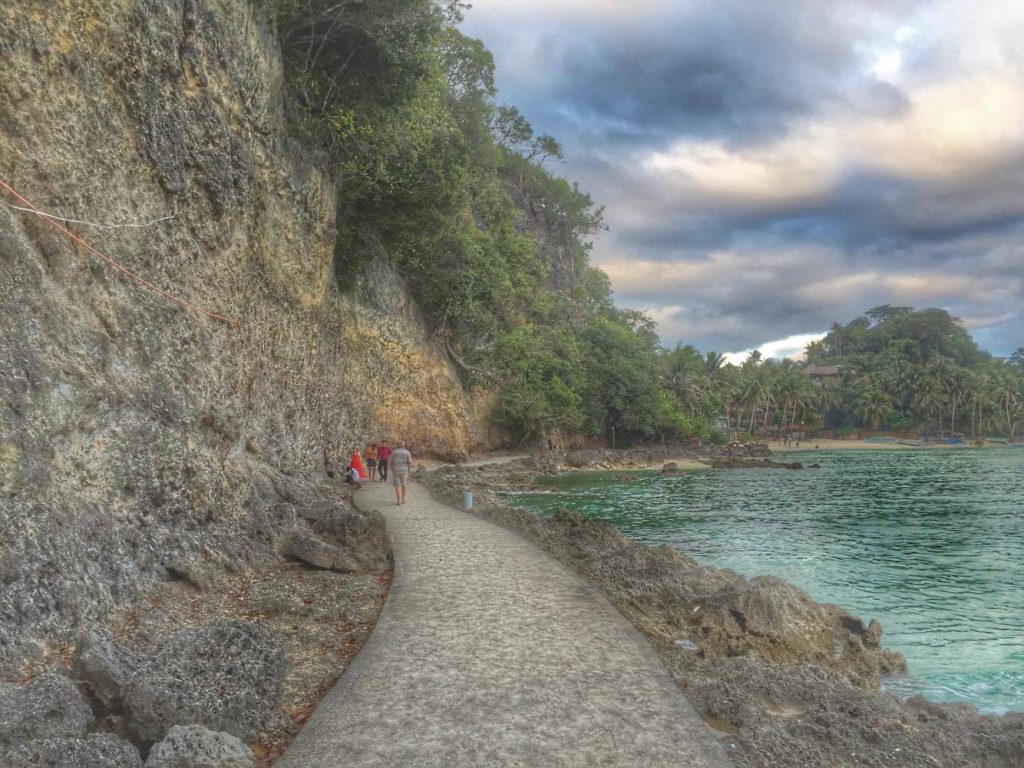 Who knew there was an Ayana-Bali-rockbar-ish area here at the distant corner of Station 1. Best for sunsets and chilling with your glass of margarita, Steve’s Cliff was a far cry from the overly Korean-crowded restos and pubs at Boracay’s main hub, D’Talipapa. It was nice and slow over here. The acoustic guitar singer who was playing songs such as ‘Baby I love your way’ was enough reason for me to lounge in the area for a bit while I get into the romantic sky-meets-the-ocean mood: the yellow-orangey sky and the torquoise-colored ocean as our lovely backdrop. 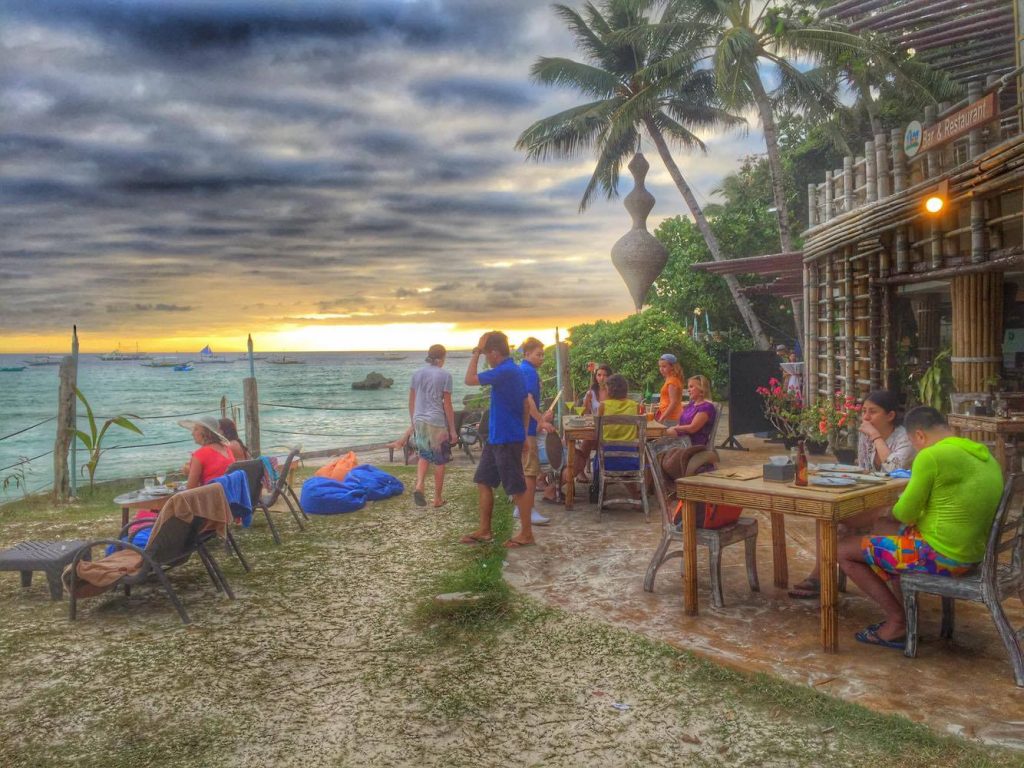 A few minutes passed by and we decided to amble further north and discover what could be lying behind the cliffs as seen from a distance.

Small backpacker inns filled the rest of the shoreline with Caucasians packed in groups drinking their San Mig beers on colorful bean bags, while the rest, while lying on beach recliners, were getting their golden skin overly baked.

Little did I know, an unflinching little adventure awaited us as we further plodded the beautiful rock and crag formations, semi-circumnavigating the narrow pathway that led as to the other part of the island.

One little wrong movement will risk your life: sliding down from the steep cliff, that is! Well, unless you know how to swim. 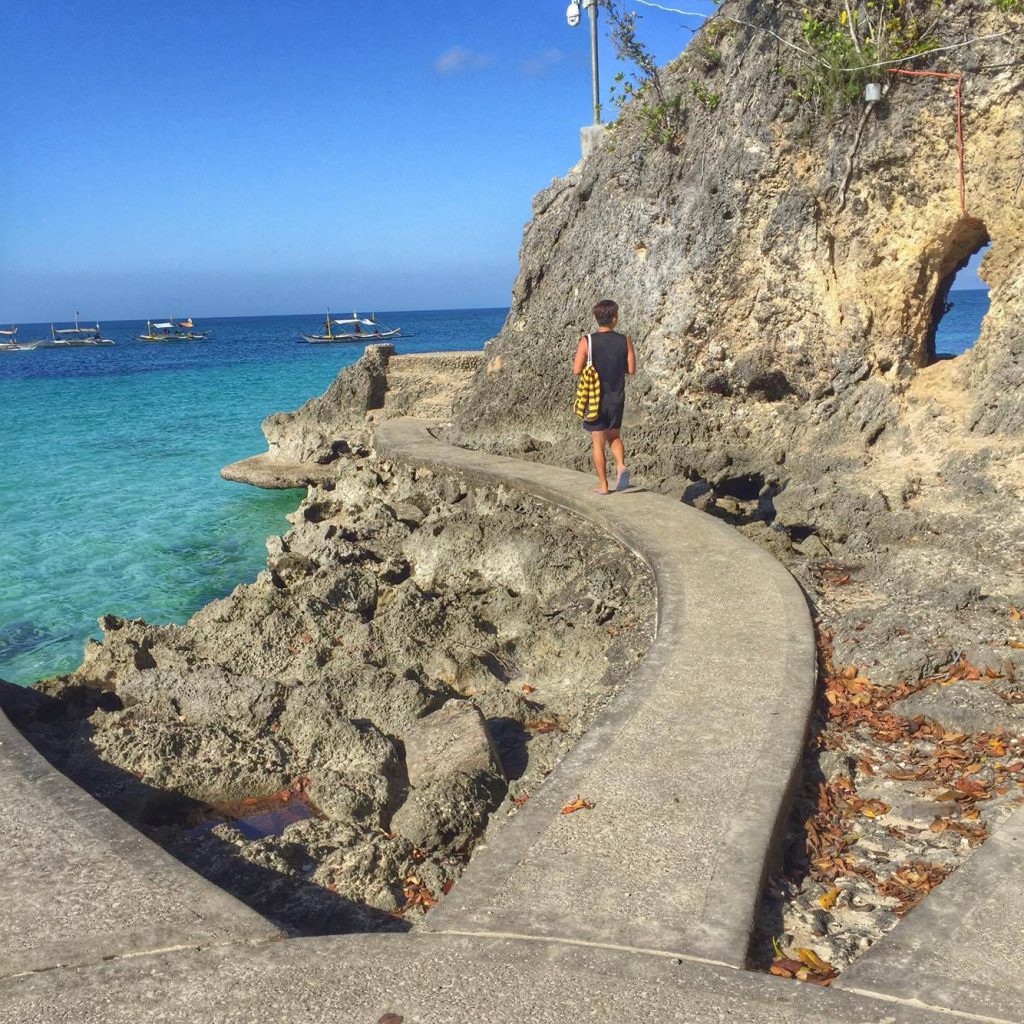 We also got an unexpected local immersion with the troops of fishermen who just got out from their boats after a day’s work. There they were, herd together, with a content look on their faces as they divide whatever they have gathered among themselves: petite fishes jumping from the nets and mini crabs trapped in plastic containers. 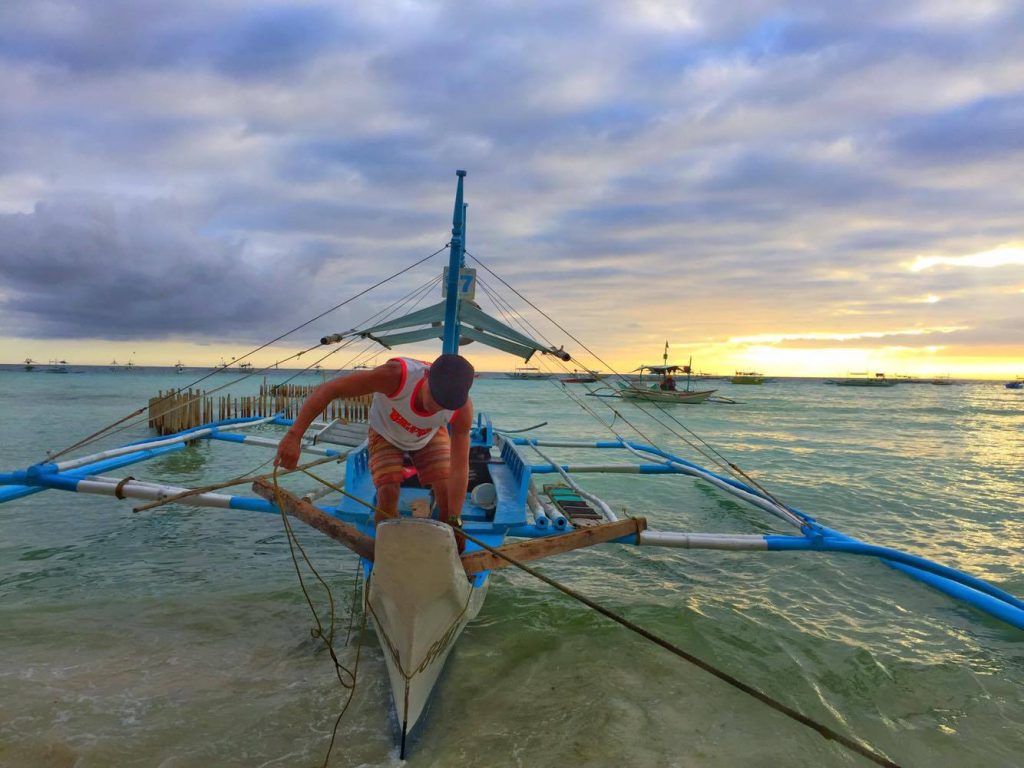 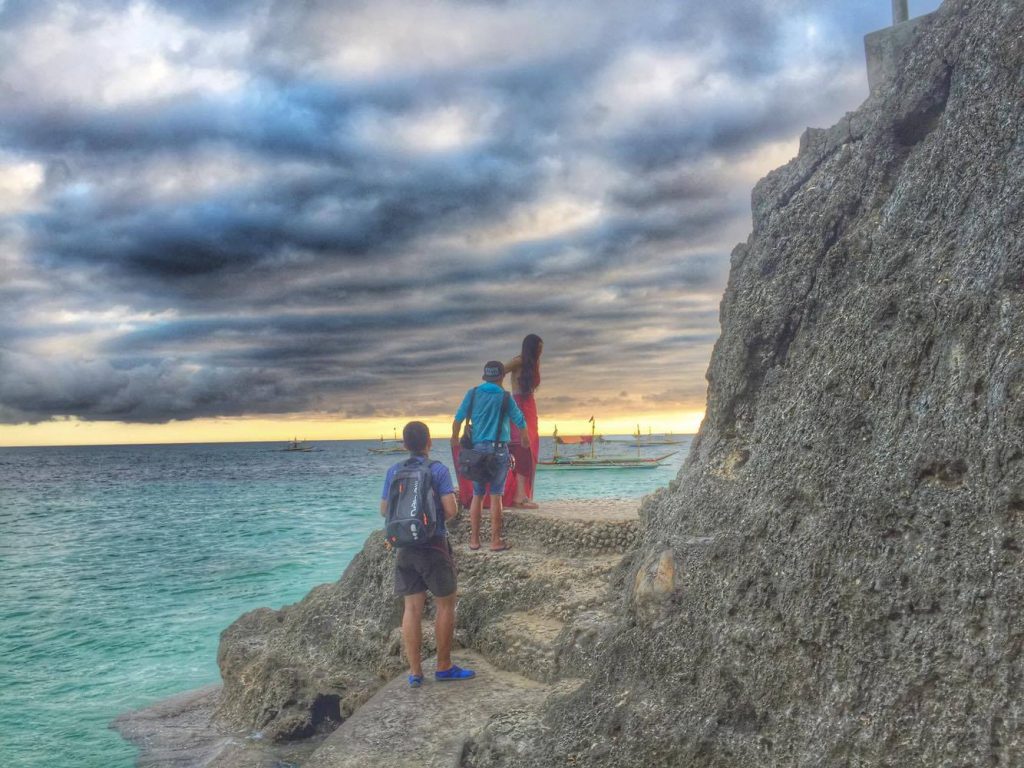 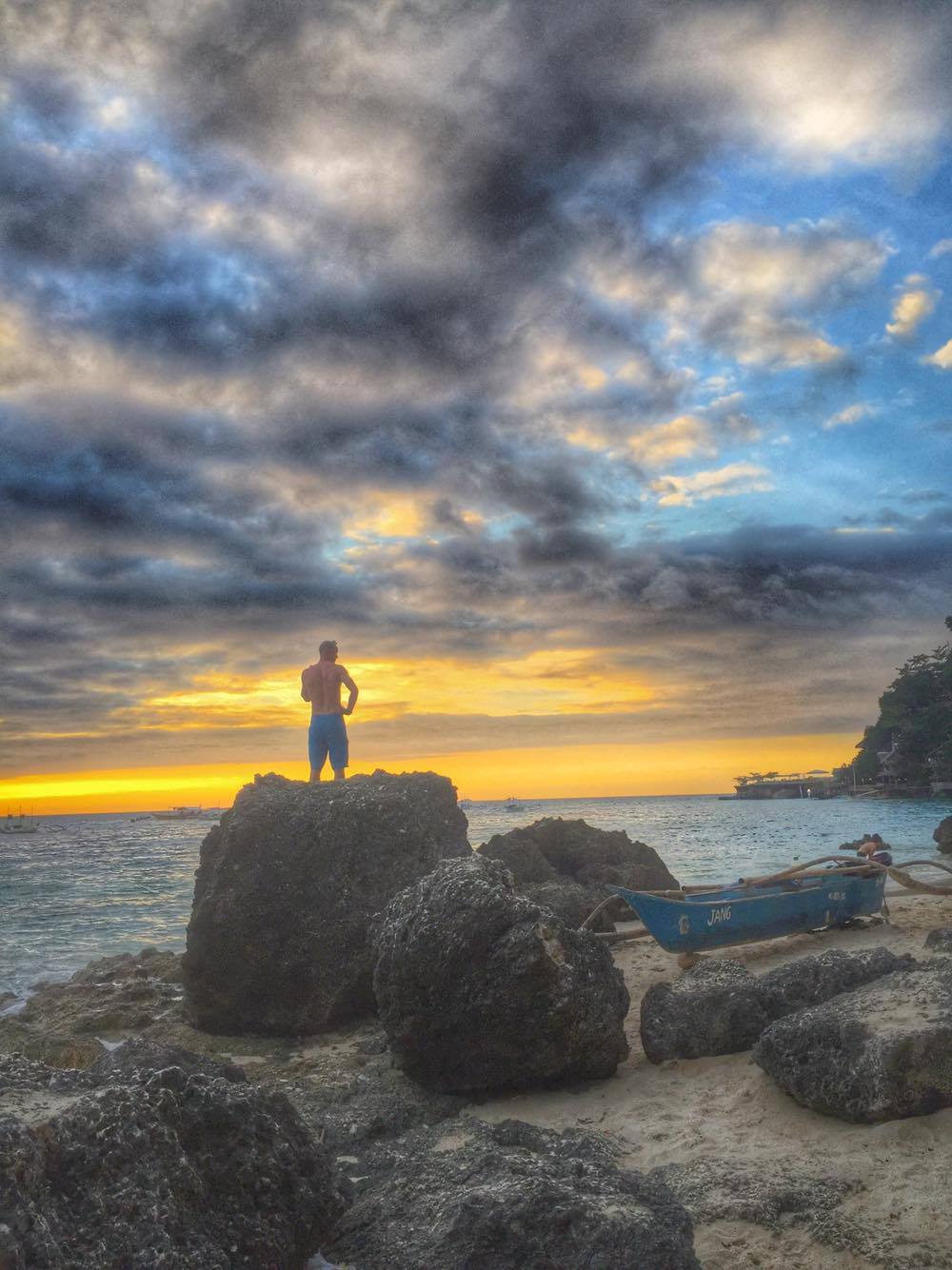 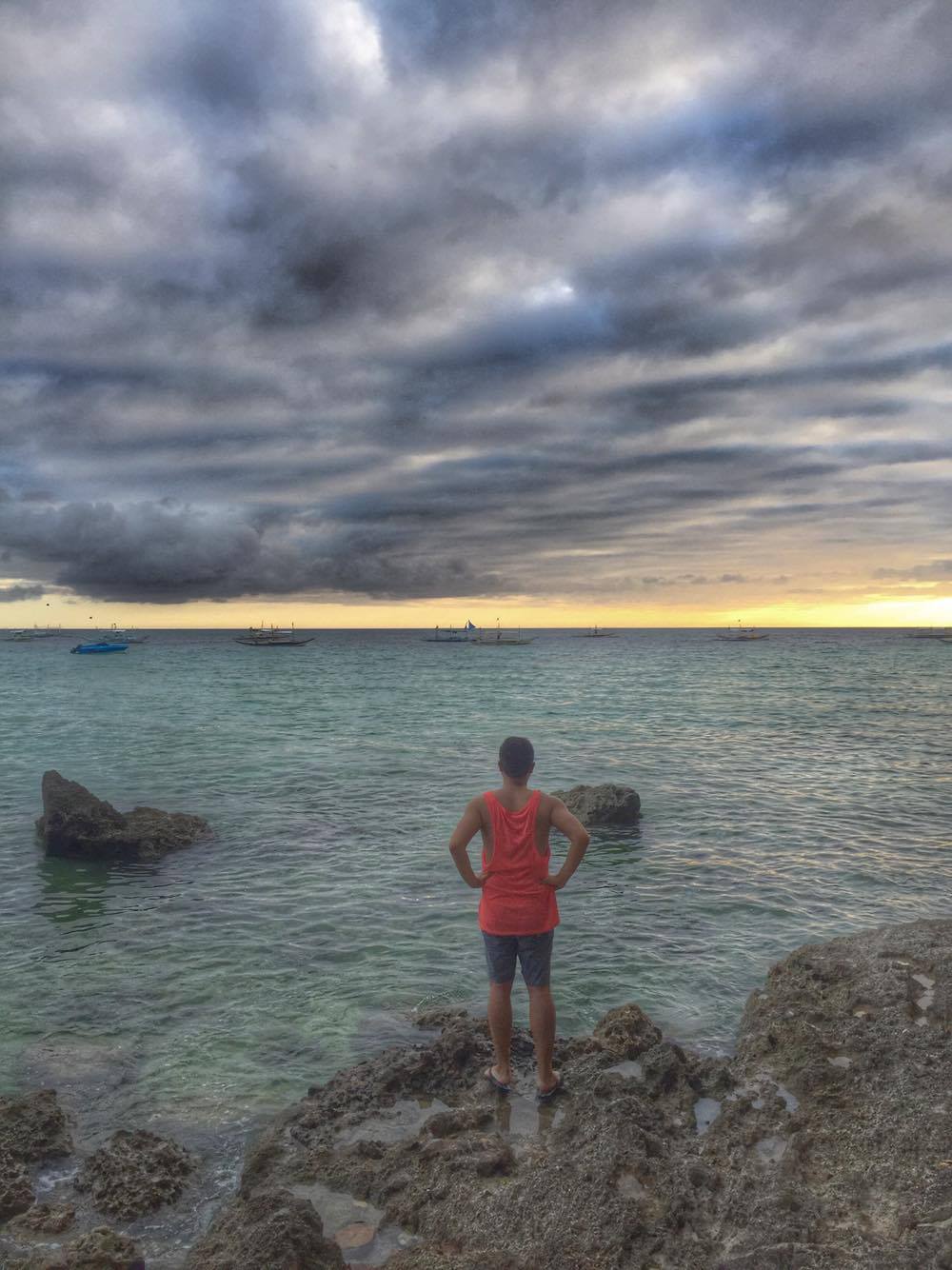 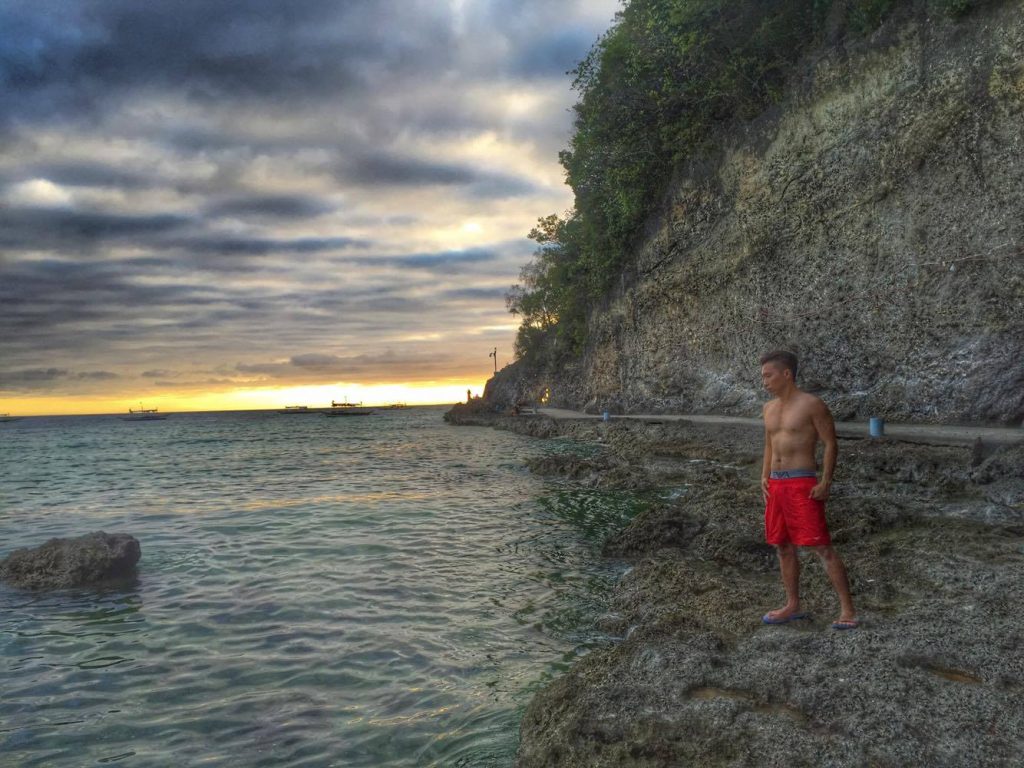 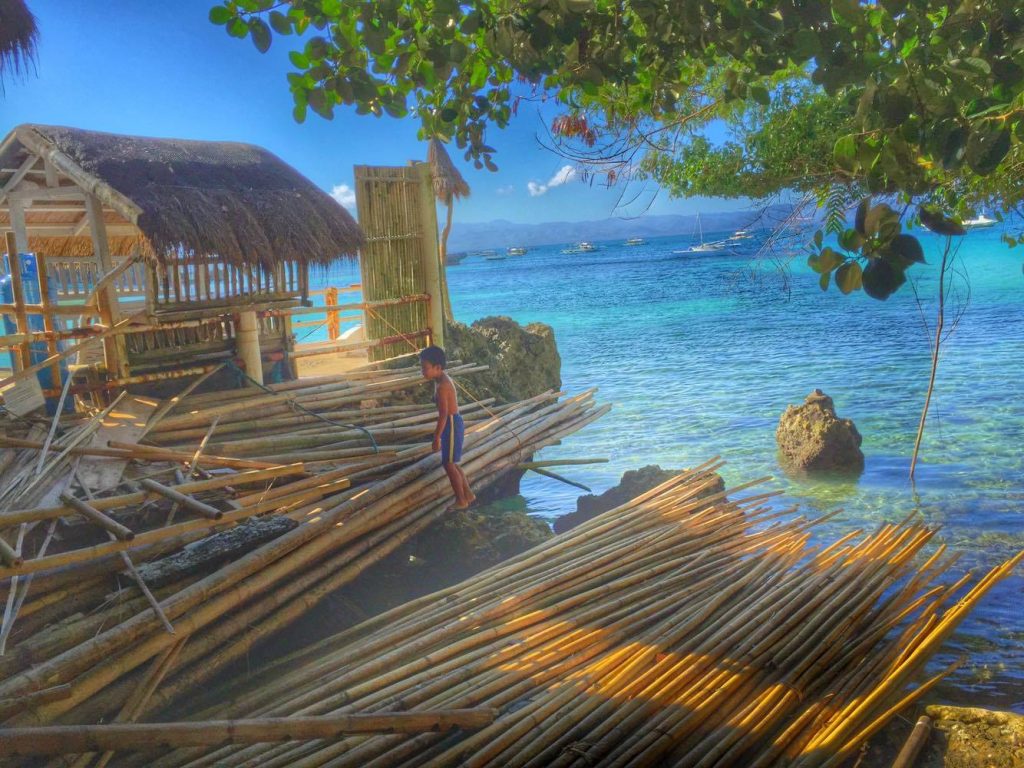 At the seemingly tip of the island (Diniwid Beach) is a hidden gem: the Spider House Boracay. Known mostly among online (Trip Advisor and Instagram) savvy travelers who wish to find idle, uncongested spots to eat, drink and be merry.

With thatched roofs and bamboo furnishings, Spider House Resort (which houses 14 guest bedrooms) is now a popular hotspot among the young crowd and foreigners who hang around their treehouse-cum-restaurant from 4 p.m. till midnight. Apparently, to get the best sunset view in the whole of Boracay Island. 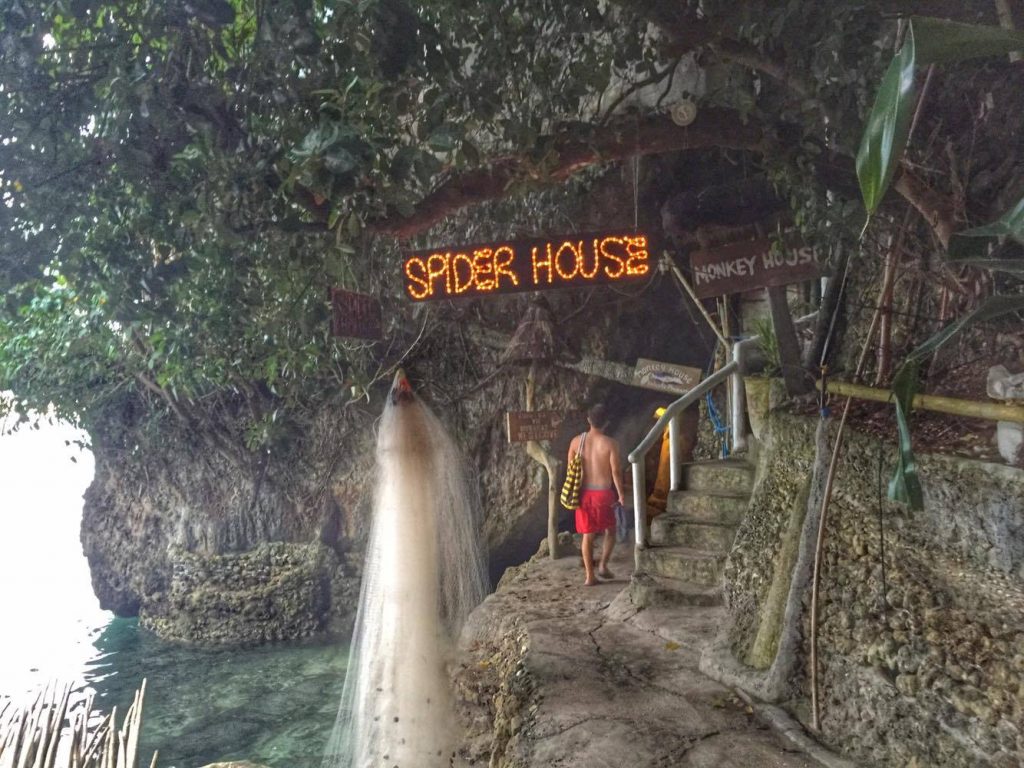 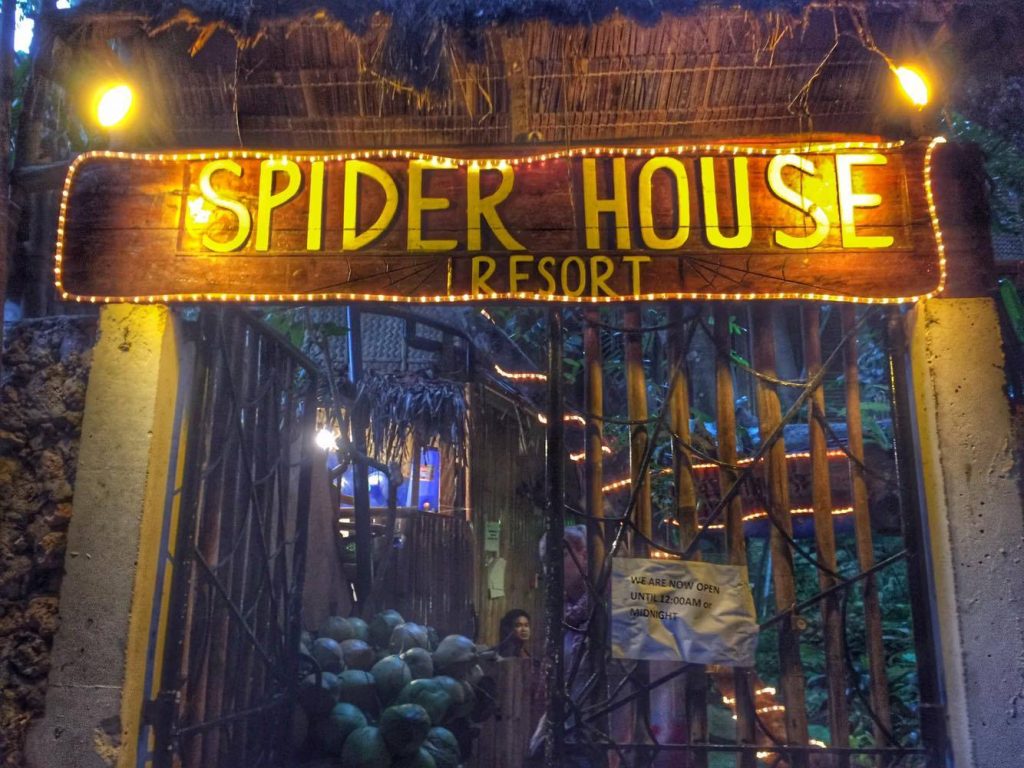 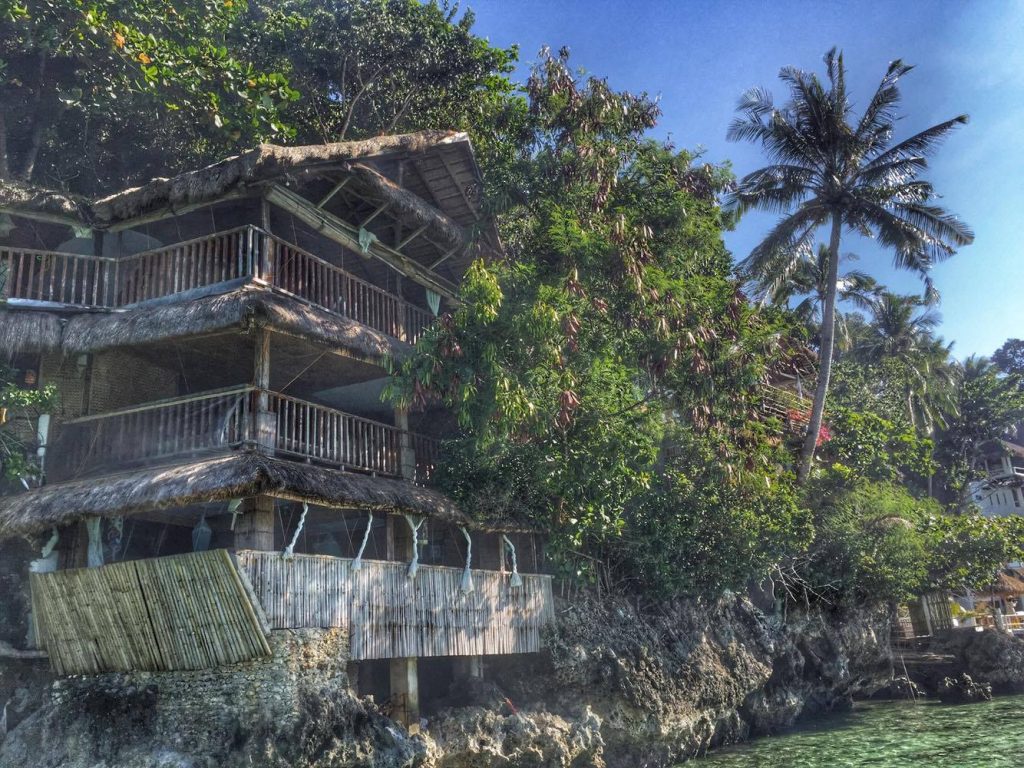 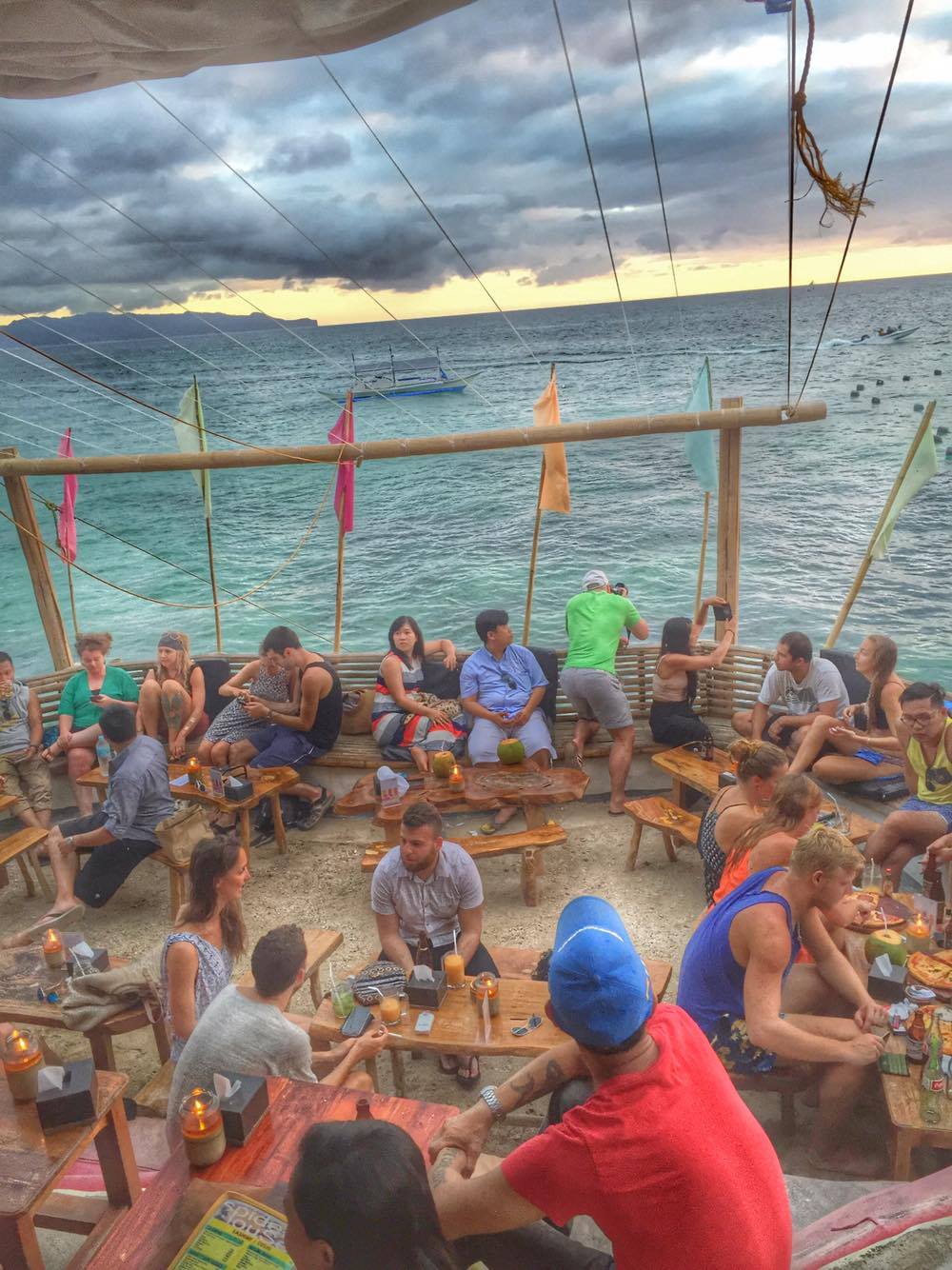 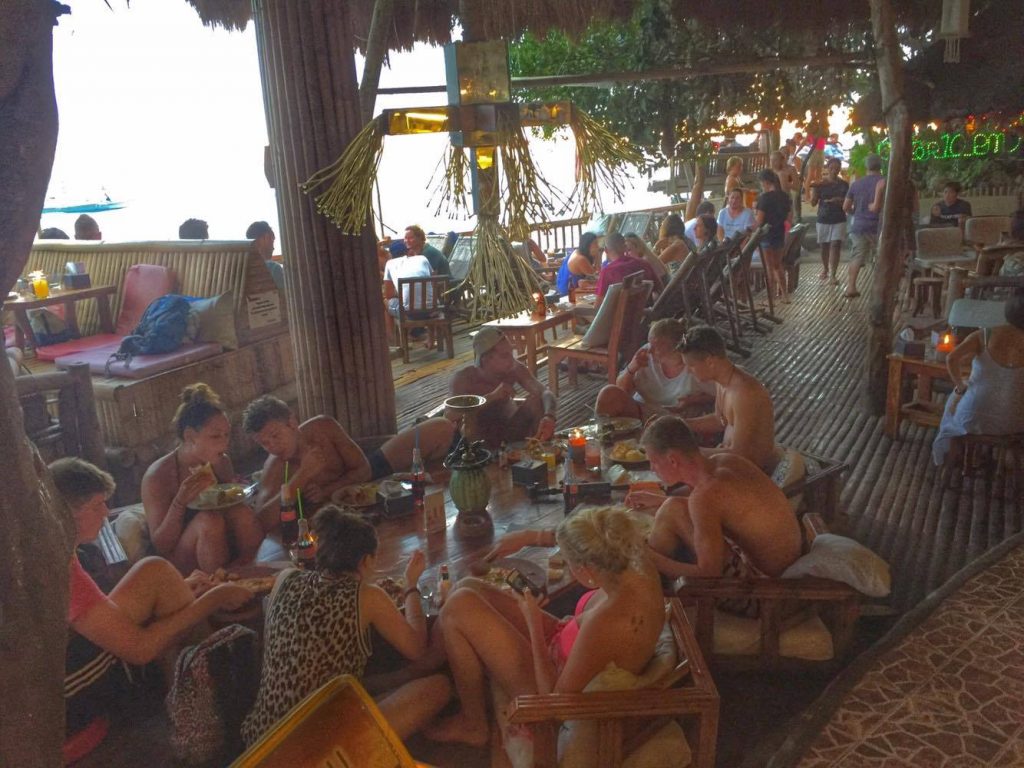 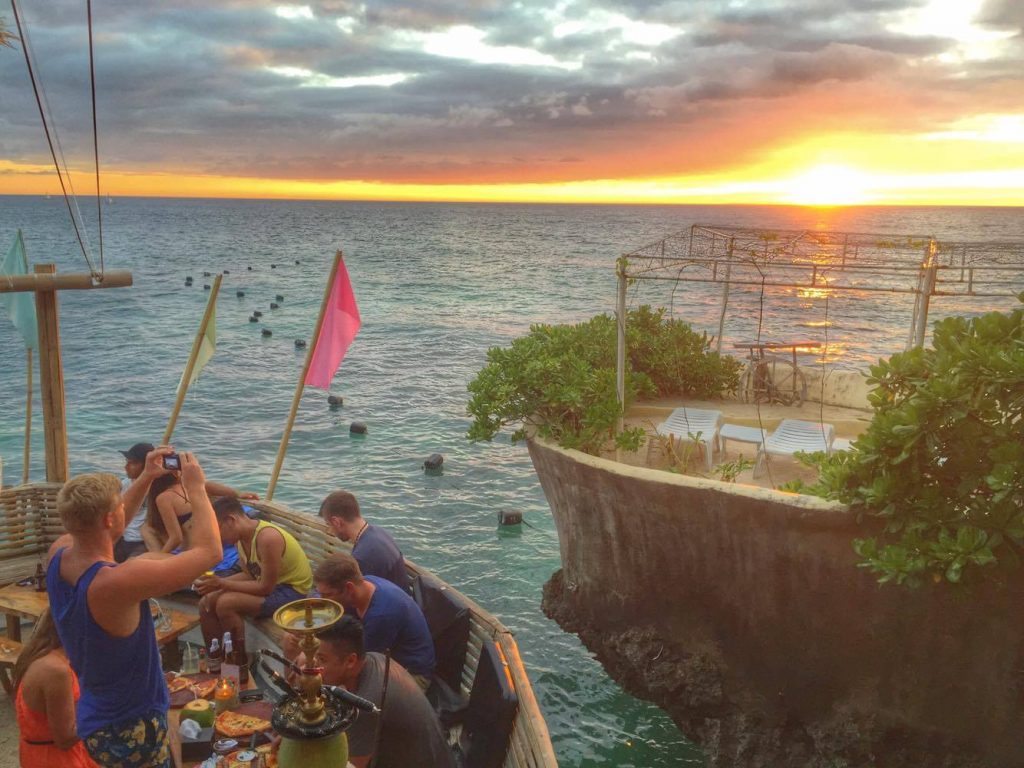 I came back the next day for breakfast, and the treehouse was surprisingly empty. I guess most of the travelers here are night owls. This gave us the luxury of time to enjoy their beachfront: an almost seven-feet climb down from their treehouse to the sea. It was still low-tide then, hence I had no problems swimming back and forth from the bamboo stairs to the floating wooden dock, a great spot to get a tan.

See also  What Does It Mean To Be An 'ABUNDANT'?

I indulged in this blissful experience for two hours – swimming, drinking my coconut juice, sunbathing and Instagramming. Ah, life! 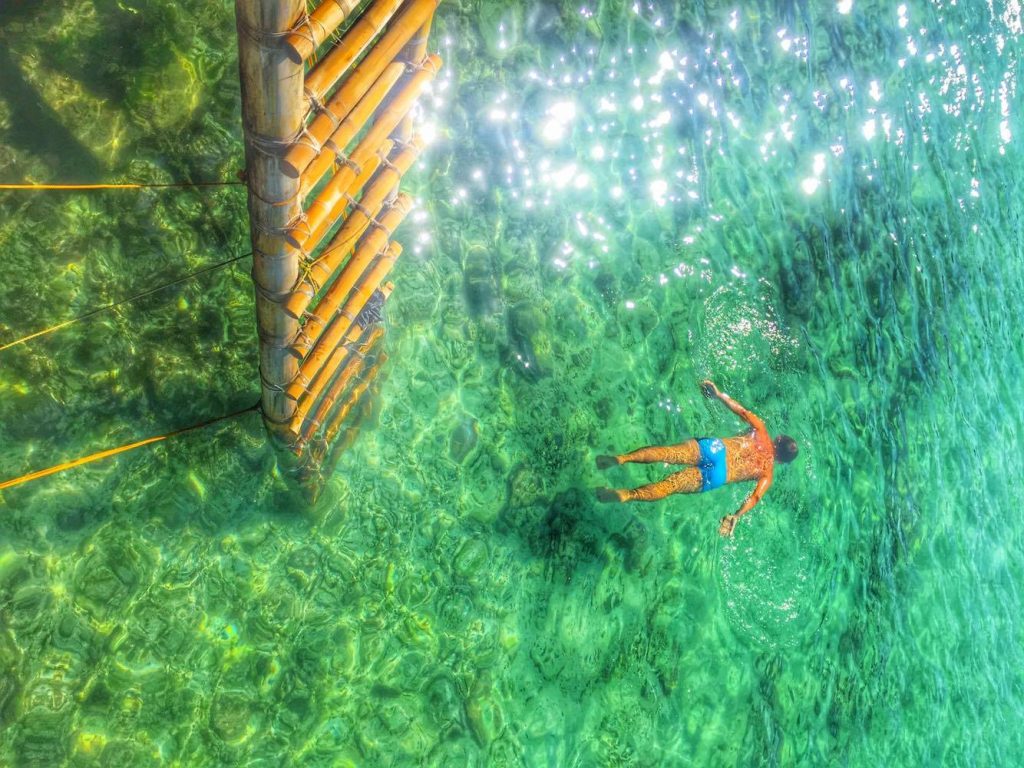 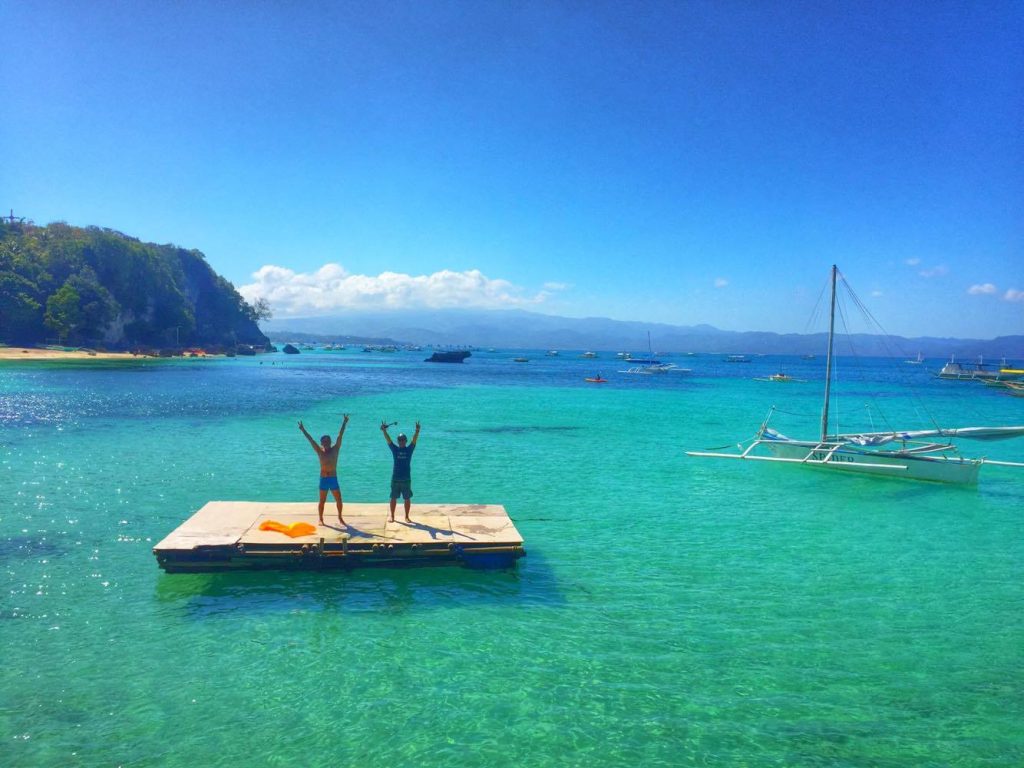 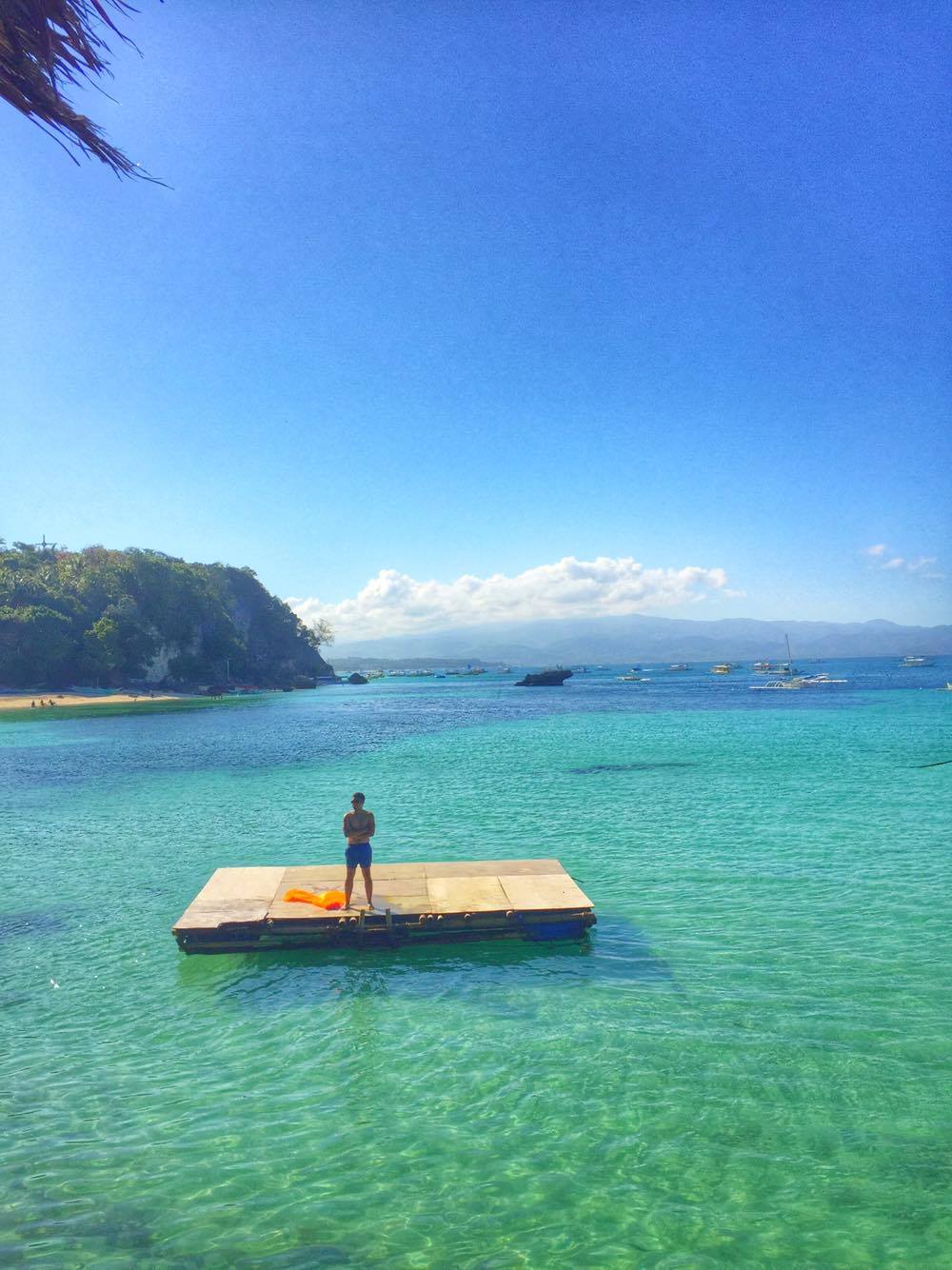 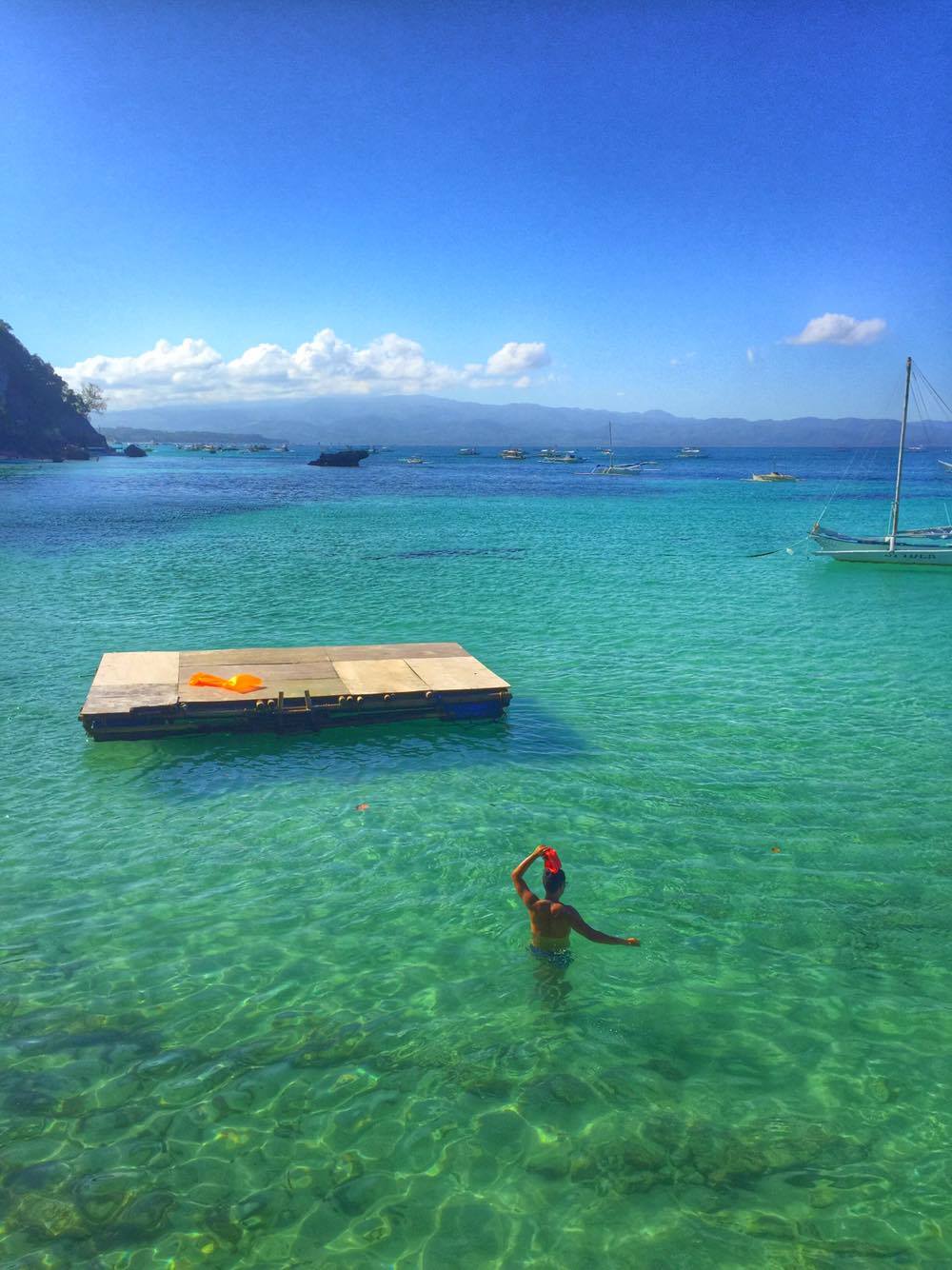 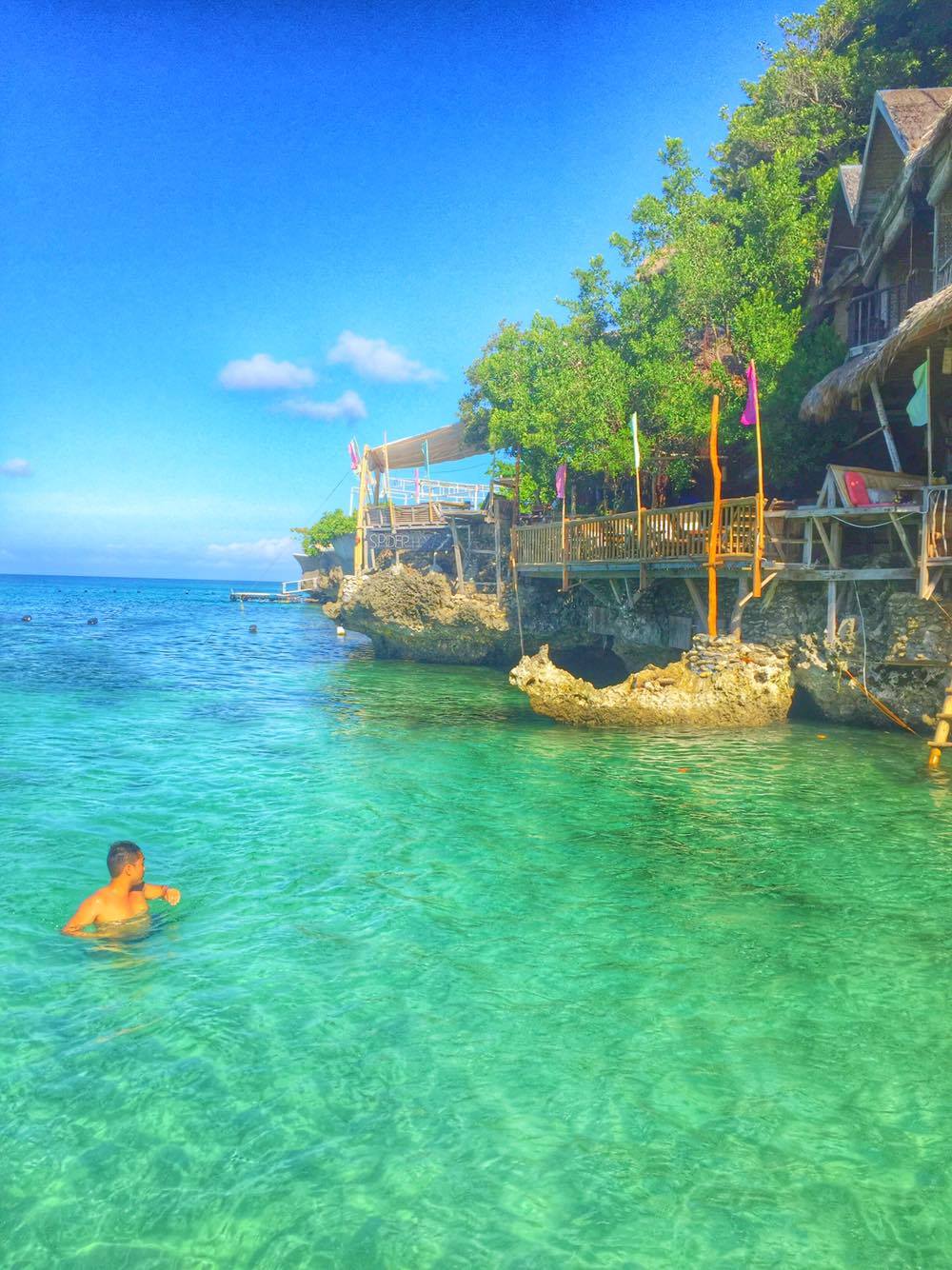 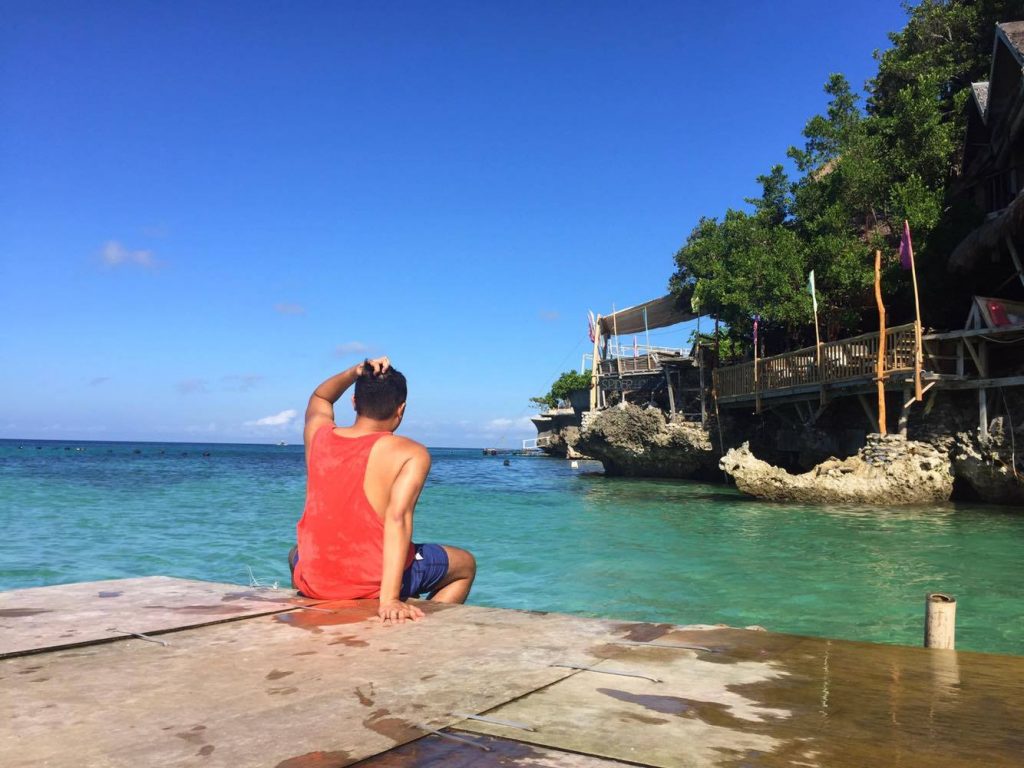 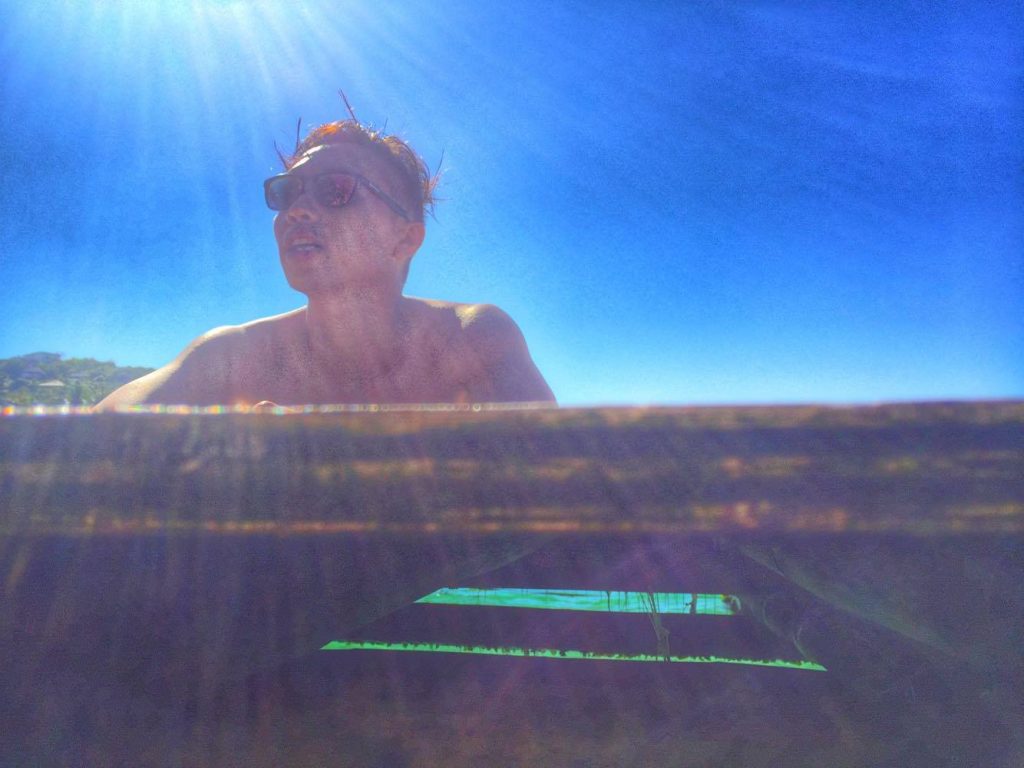 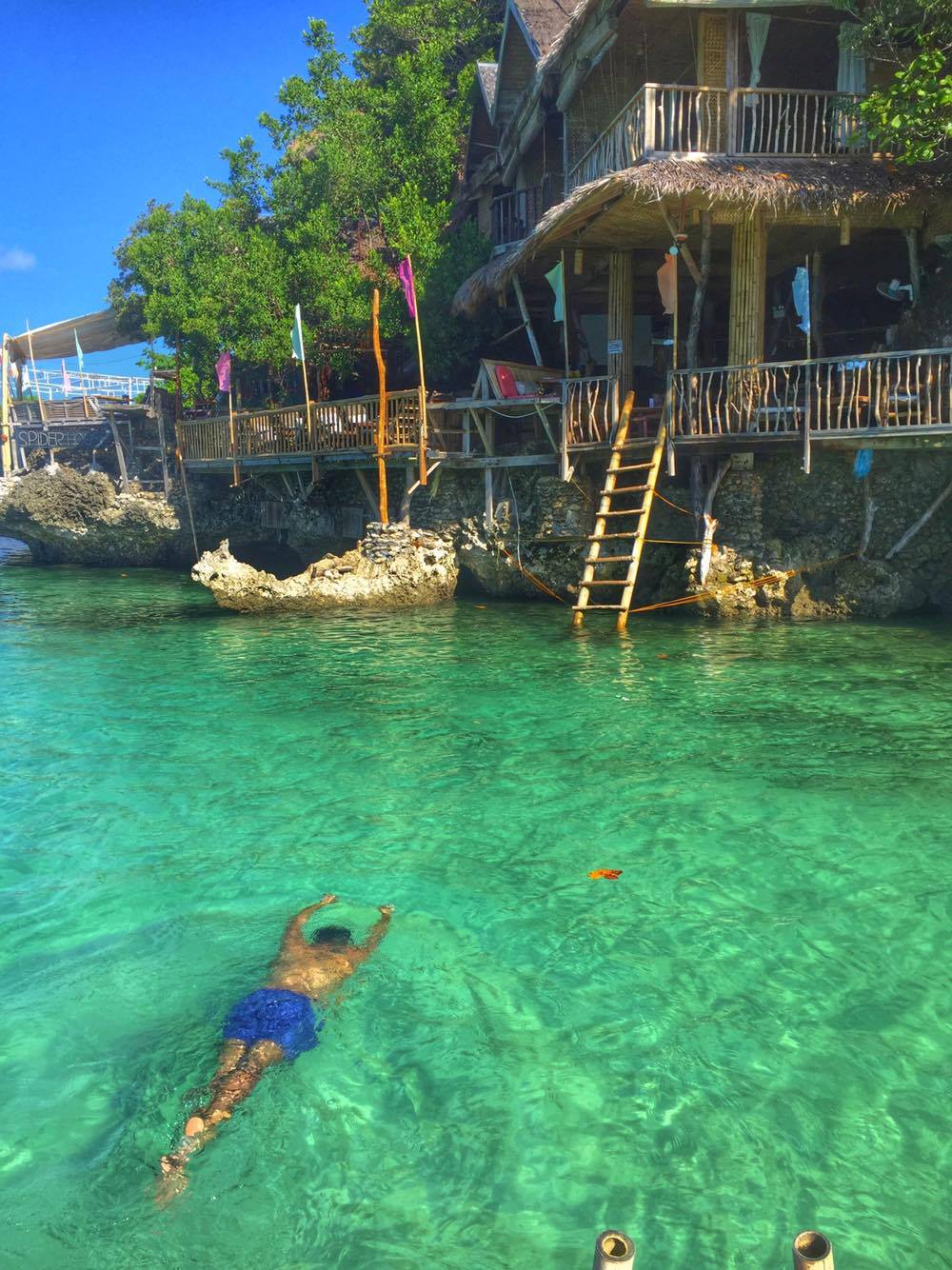 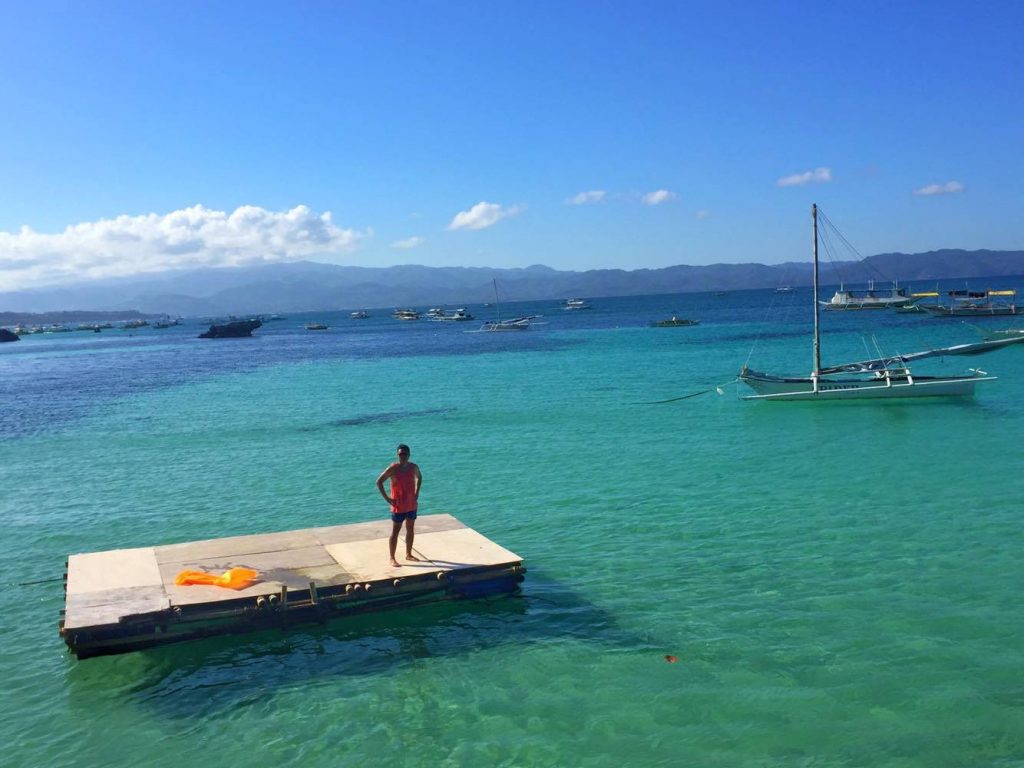 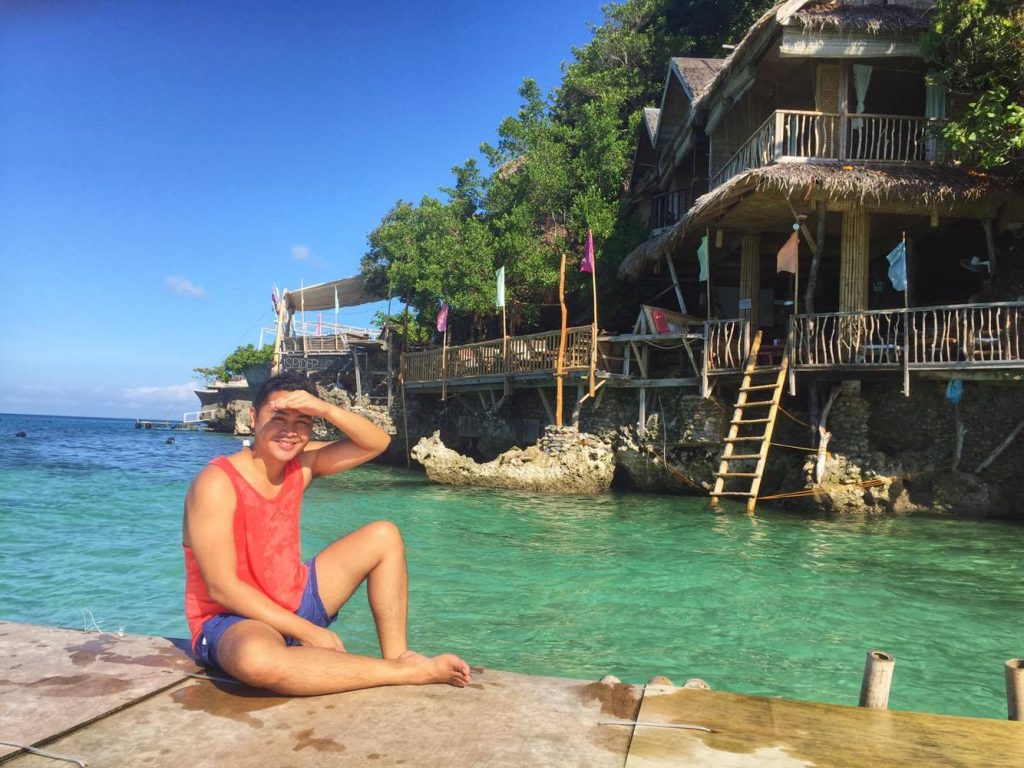 When we were ready to head back, only then did we realize that the resort doesn’t have access to any paved roads for us to get a motor bike and hitch back to our hotel.

Time for another long walk. 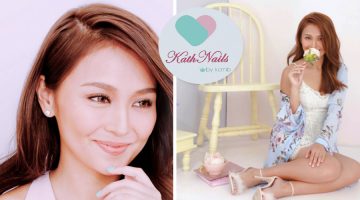