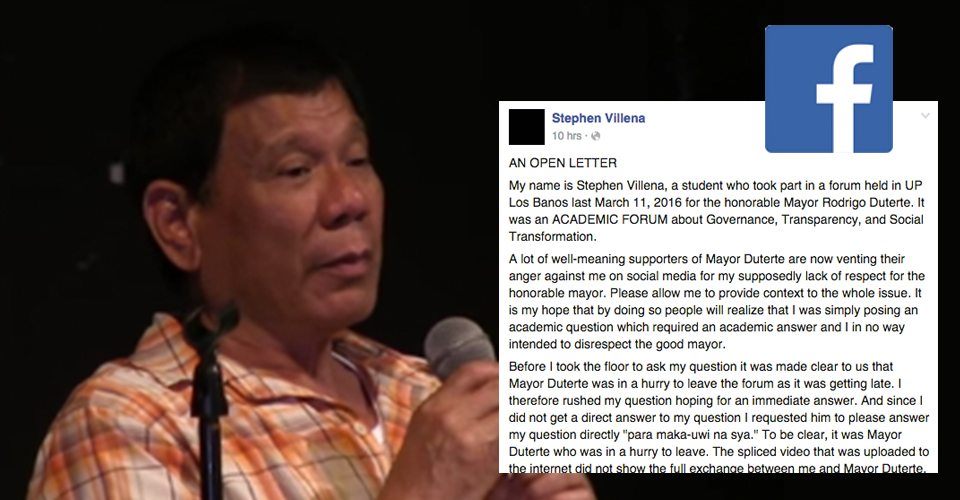 Varying views and opinions on the the Duterte-UPLB student issue flood our timelines. Last March 11, presidential candidate and Davao City Mayor Rodrigo “Rody” Duterte attended a transparency forum at the University of the Philippines – Los Baños. A student became controversial after asking Duterte to give direct answers. UPLB freshman Stephen Villena who was subject of online bashing and criticisms issued an open letter via Facebook earlier today.

My name is Stephen Villena, a student who took part in a forum held in UP Los Banos last March 11, 2016 for the honorable Mayor Rodrigo Duterte. It was an ACADEMIC FORUM about Governance, Transparency, and Social Transformation.

A lot of well-meaning supporters of Mayor Duterte are now venting their anger against me on social media for my supposedly lack of respect for the honorable mayor. Please allow me to provide context to the whole issue. It is my hope that by doing so people will realize that I was simply posing an academic question which required an academic answer and I in no way intended to disrespect the good mayor.

Before I took the floor to ask my question it was made clear to us that Mayor Duterte was in a hurry to leave the forum as it was getting late. I therefore rushed my question hoping for an immediate answer. And since I did not get a direct answer to my question I requested him to please answer my question directly “para maka-uwi na sya.” To be clear, it was Mayor Duterte who was in a hurry to leave. The spliced video that was uploaded to the internet did not show the full exchange between me and Mayor Duterte. The cut video somehow made it appear na pinapauwi ko na si Mayor. Hindi po, sya po ang nagmadali na umuwi. In fact I only wanted to accomodate his wish to finish the Q&A portion of the forum asap. The end result was that the people who only saw the shortened video but did not participate in the forum somehow got the impression that I was bastos, arrogante, walang modo.

To my mind the issue I wanted to raise with Mr. Duterte was very important to us students. It concerned EDUCATION versus DEFENSE. He said in the forum that he wanted to give priority to the budget for EDUCATION. So I asked him how he planned to achieve this knowing that in various sorties and interviews he also said that he will give priority to PEACE AND ORDER which I surmised would require a greater budget for the police force and the military.

Much as I wanted to give the good mayor all the time he wanted to answer my question, I was also considering his very limited time with us. If I appeared to rush him it was in no way motivated by an arrogant desire to cut him. I only wanted him, despite his limited time, to give a clearcut answer to an issue which I deem very important.

This here is the crux of the matter: It is not so much the issues I raised with Mayor Duterte that garnered so much attention. It was rather my way of speaking that was deemed insensitive. The spliced video only deepened the perception by many that I arrogantly wanted Mr. Duterte to leave immediately. I am not exactly suave and charming when I speak. This is probably why I was seen as insensitive. But let me just say this: MY PERCEIVED LINGUISTIC IMPERFECTION IN NO WAY IMPLIES AN ARROGANT DISPOSITION.

We live in a country where we value democratic principles. And in any democracy it is a given that there will always be a multitude of opposing views on what constitutes a healthy democracy and who are the best people qualified to manage our fragile democracy. In my case I was not even fighting an opposing view with my personal view. I was ASKING for the particular view of one particular candidate running for public office regarding one particular issue.

To all the people who defended me particularly on social media, you have my deepest gratitude. To all the people who were hurt by my statements in that March 11 forum, rest assured that you have my full respect. I only ask that you try to analyze first the full context of that said forum and hopefully come to the conclusion that I was not maligning your beloved candidate for the presidency. To Mayor Rodrigo Duterte, I know that you carry so much weight on your shoulders now. You have always been known to be frank and direct when you speak. I believe that among the candidates running for the presidency, you in particular will easily understand a student who only wanted to be frank and direct with you. Finally, to all my fellow U.P. students all over the country who have been at the receiving end of scathing criticisms because of me, I can only humbly thank you for standing by me.

It is my prayer that instead of us Filipinos fighting each other over our differences we focus our attention instead on understanding the pressing social, political, and socio-economic problems facing our country. Then we will hopefully be better enlightened when we exercise our democratic right to vote come election time.

It takes maturity to make democracy work. And it takes acceptance of our diversity to make it flourish.
Peace to all who read this open letter. May God give us the grace to accept each other – both for what we are, and in spite of what we are.

DISCLAIMER: I am not a blood relative of any of the candidates running for the national office. Neither am I a friend of any of the children of Maam Leni Robredo as alleged. I am not in the photo supposedly showing me with the Robredo children and I have absolutely no connection with them whatsoever.

In case you missed it, here are the related videos we gathered: 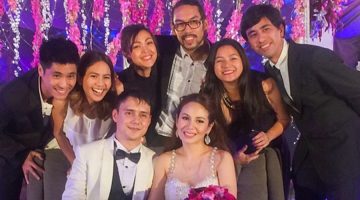