In Photos: President Rody Duterte and His Family at the June 2016 Presidential Inauguration

Some thought Miss Philippines Maxine Medina didn’t properly understand the question asked by the host in the recently concluded 65th Miss Universe; while some blamed it on having an interpreter that probably confused her even more.

Miss Philippines was part of the Top 6 alongside the candidates from Colombia, Kenya, Haiti, Thailand, and France.

In the Q&A round, host Steve Harvey asked Maxine: “What is the most significant change you’ve seen in the world in the last 10 years?”

And for the very first time in the Miss Universe history, the Philippines partially used an interpreter (i.e. translated the question from English to Filipino):

Maxine replied (in English): “In the last 10 years of being here in the world, I saw all the people bringing in one event like this in Miss Universe. It’s something big to us that we are one. As one nation, we are all together. Thank you. Maraming salamat po,”

Maxine didn’t make it to the next round of the competitions (Final 3), where Miss France was eventually crowned as the new Miss Universe.

Was it a case of getting “Lost in Translation?”

Would it have been really better if Maxine replied back in pure Filipino language? Maybe.

Did the interpreter translate the question properly? Maybe not too.

We try to analyze further: Perhaps instead of using the keyword “naganap,” the interpreter should have used a stronger word for “change” such as “pagbabago” (i..e. Ano ang pinakamubuluhang pagbabago ang tingin mong nangyari sa mundo sa nakaraang sampung taon??

Regardless if it it was in English or in Filipino, only Maxine knows what she thinks is proper to use at that very moment — and it just so happened she was more confident to use the English language.

And what they say is true — what’s meant to be is meant to be. All we know is that Maxine still did very well and made the Filipino proud. A Top 6 finish in your home country is not bad at all. 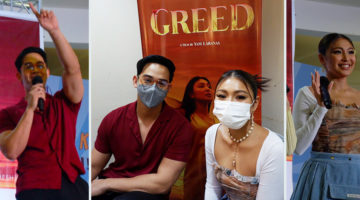