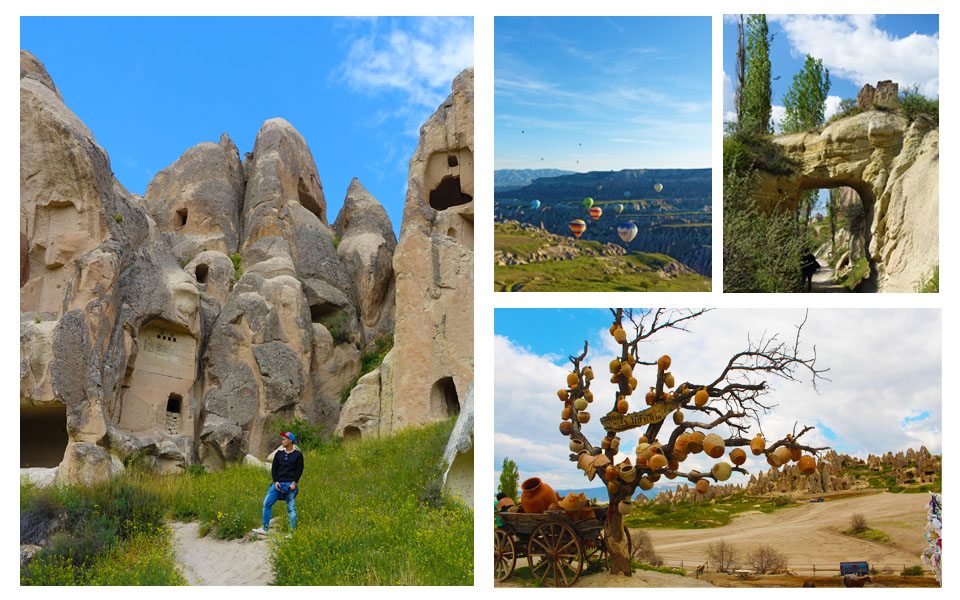 If there was a Disneyland in ancient times, it will be Cappadocia–a history-rich, adventure-full destination in central Turkey.

My first trip to Turkey back in May 2015 has set high standards for any of my future travels–why wouldn’t it be, the country totally captures who I am as a ‘traveler.’ It has so much history, so much color, so much adventure, and so many little surprises abounding anywhere and everywhere I go. I call Cappadocia: my own ancient Disneyland. 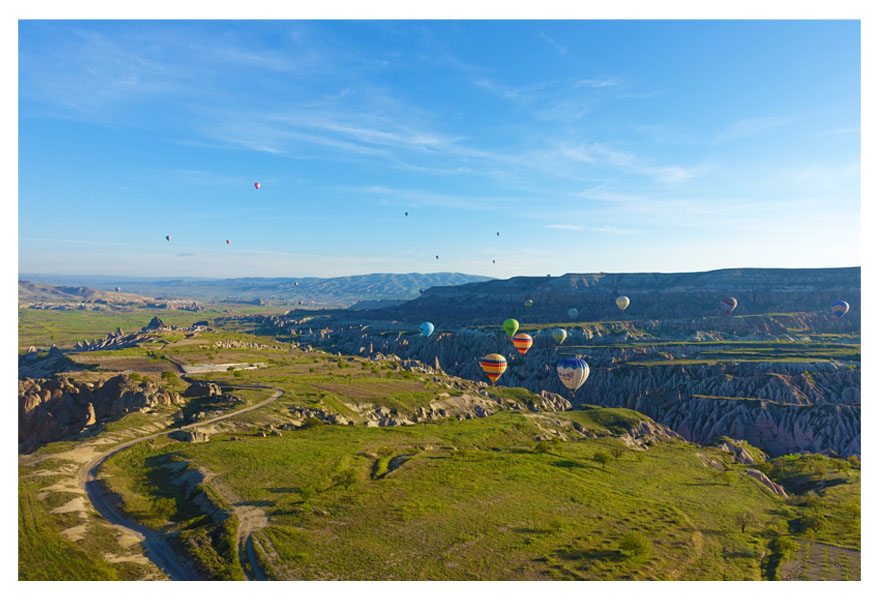 I’ve heard a lot of people raving about the beautiful mornings and out-of-this-word scenery in Cappadocia and boy, I was utterly ecstatic to visit this UNESCO-heritage site.

How to go to Cappadocia from Istanbul:

From our hotel in Istanbul (Galata area), we rode a local taxi and headed to Sabiha Gökçen International Airport (SAW) for an early morning flight. The taxi fare though was terribly hefty in the pockets (TL150), although this is probably the most convenient option for an hour and a half journey from Istanbul to the airport.

Later that day, we found out through online research that we should have alternatively taken a non-stop public bus (Havatas bus line) from Taksim Square—which was only a few minutes away from our hotel–to the airport, and it’ll only cost us only a tenth of what we paid for on a taxi.

To fly to Cappadocia, we took a local one hour and 30 minute flight aboard Pegasus Airlines which arrived at the Kayseri Airport. Luckily, we’ve booked our local land transfers prior to our trip (with the help of our hotel concierge) as there weren’t a lot of public transpo options from Kayseri. Traveling from the airport to Goreme town proper was another one hour trip. 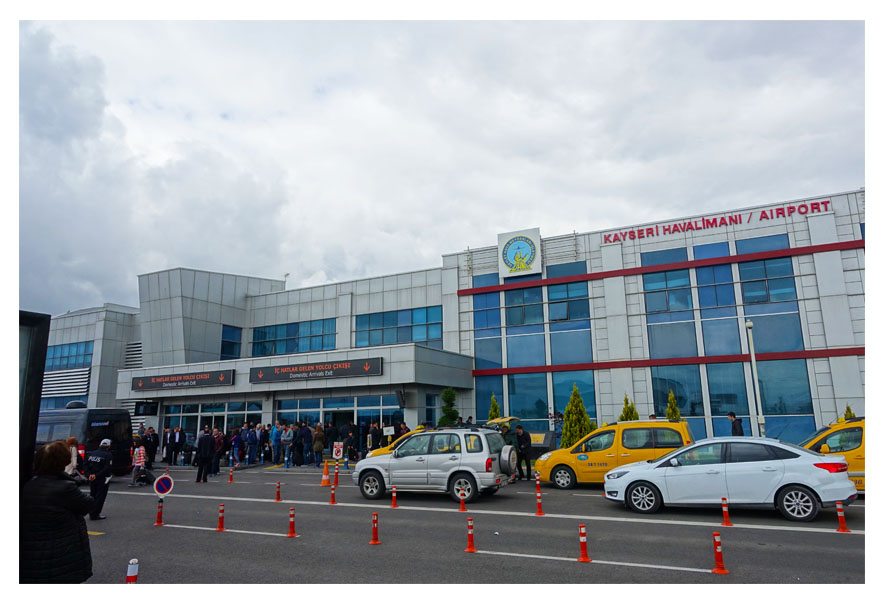 Upon seeing the rows of shops, restaurants and rock formations in a little suburb, we knew we’re already near our destination. It was lunch time when we reached our hotel, Arch Palace Hotel, a cozy two-storied mansion built from concrete blocks and cement. Unlike most hotels in other parts of the world with exquisite facades which are extensively decorated, most hotels we found in Goreme, Cappadocia are bare and are typically painted (if they are even painted) in neutral colors. 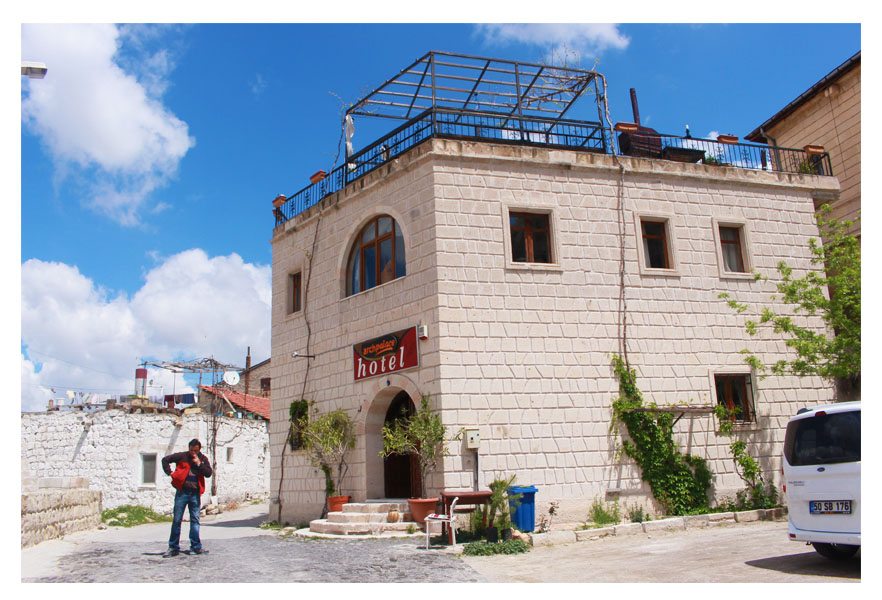 We were greeted by the hotel owner, Serdar, who immediately welcomed and called me by my first name. He ushered us inside and to his reception room which also serves as his personal office. He knew that we’ll be in town for only a day and a half and wasted no time by presenting to us the best tourist packages we can take and the perfect spots we can visit. With a pen and a paper, he drew a basic town map with markings where we should be eating, trinkets shops we should enter, etc. He also helped us book our morning hot air balloon ride (with Voyager Balloons) and our day trip tour for the next day.

We ambled through Goreme town proper and accidentally entered a vintage textile shop ran by a grandpop who willingly invited us to enter his “carpet kingdom.” The owner–a friendly, sensible and welcoming old chap in his sixties–runs his business with his sons. As we entered his maze-like store, alleys after alleys, thrill and excitement enveloped me. Cue “A Whole New World” soundtrack: “Over sideways and under, on a magic carpet ride.” 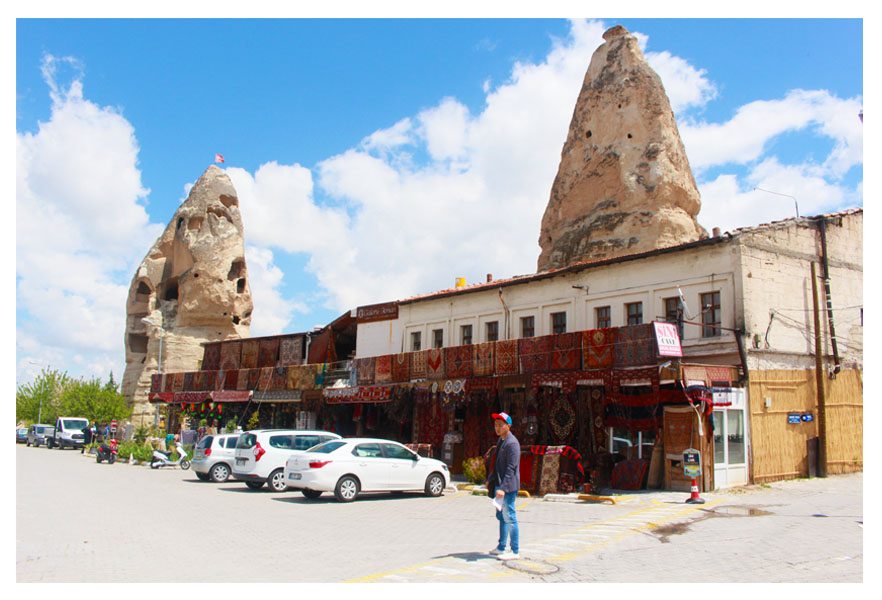 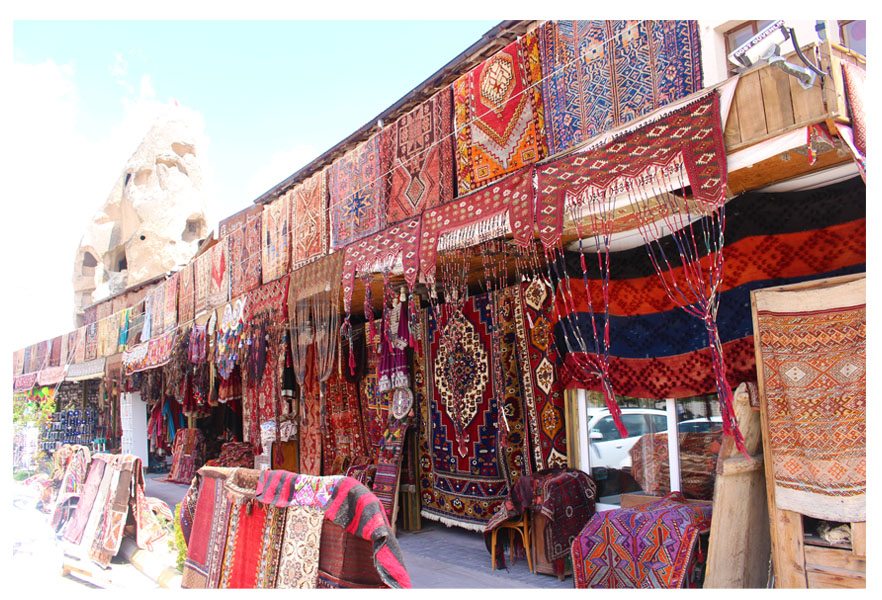 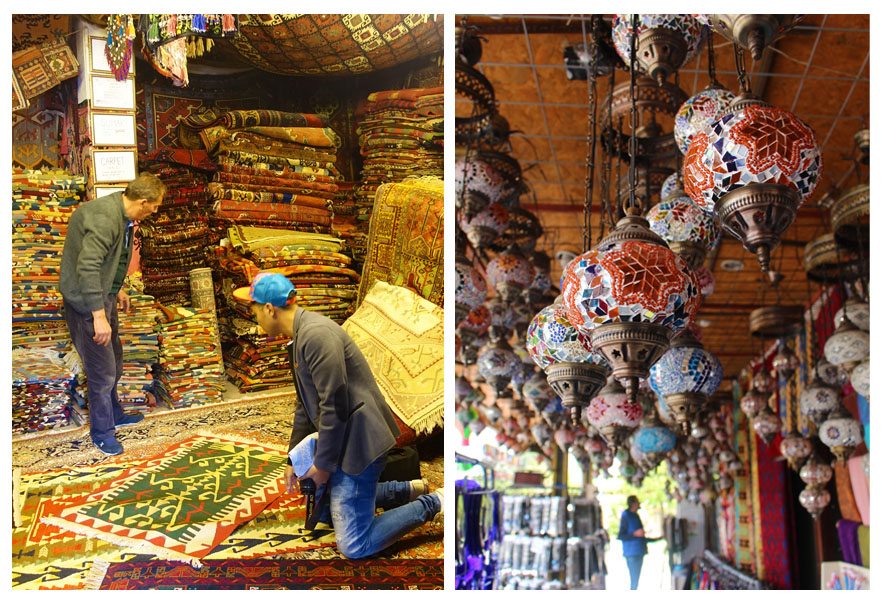 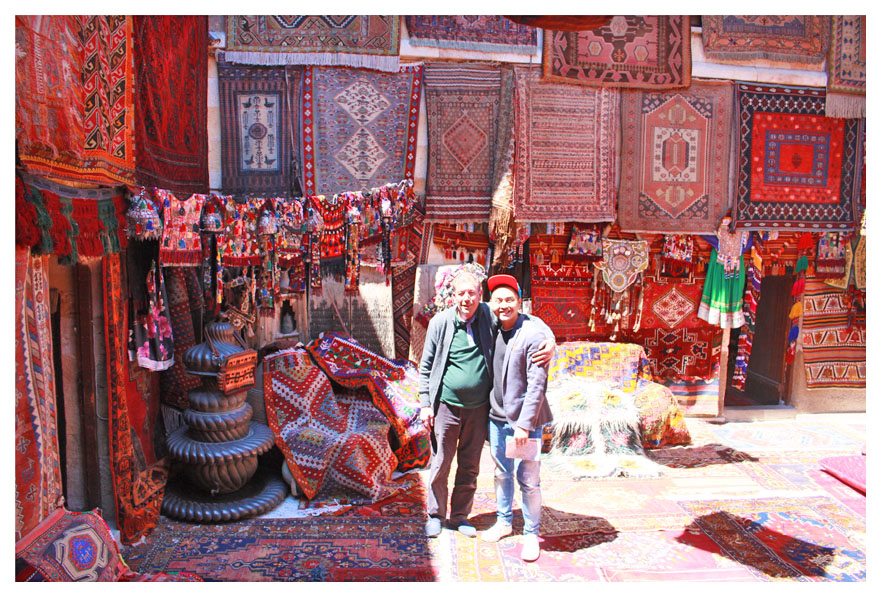 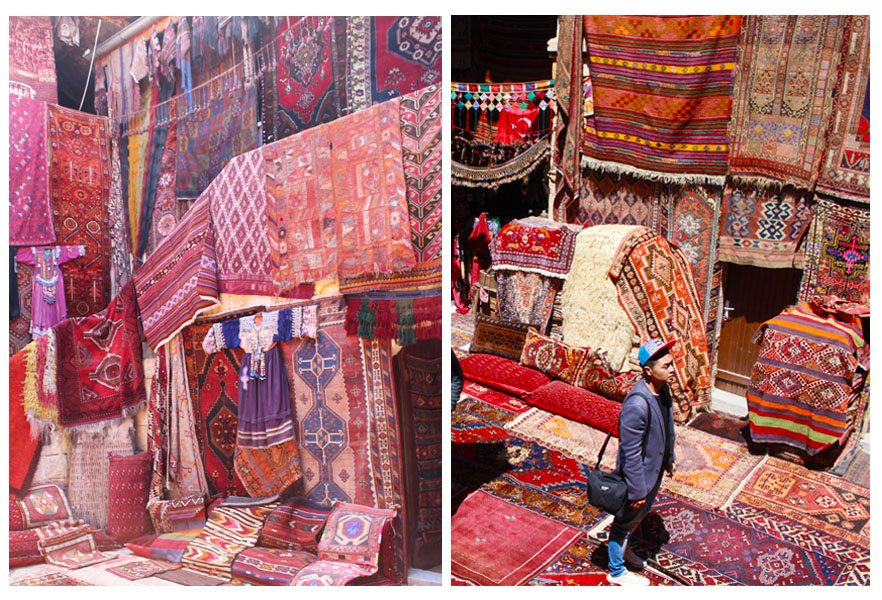 His store was amazing! It was enormous and was filled with handmade Turkish carpets and kilims (flat rugs) piled on top of each other in different designs, colors and sizes. It wasn’t cheap at all as some of them range from US$200 to US$5,000. I had to excuse myself in the most polite manner possible without offending him while exiting his store empty-handed.

Goreme is a sleepy, sleepy town. In the month of May, the weather was just nice–sunny and breezy. There were only a few people here and the tourists are usually concentrated in the town center where the bus station, restaurants, hotels and tourist agencies are.

While aimlessly walking, we then settled in a kebab place for lunch. We tried having local Turkish coffee again here for the second time (the first one we had was at a cafe in Topkapi Palace), but we still didn’t like it. Turkish coffee apparently isn’t for us; it’s not suited for our taste buds as we like ours a bit milky and creamy. 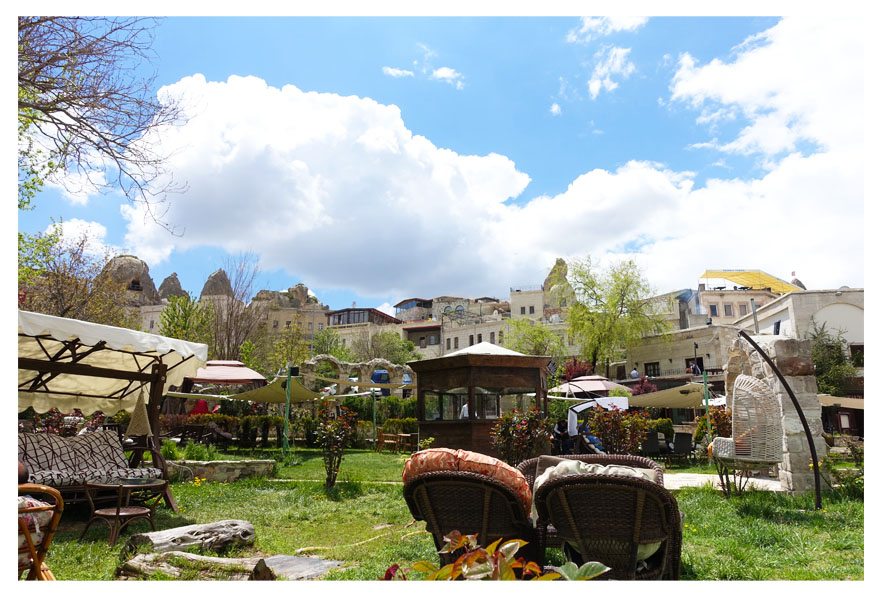 As our hotel was located right in the middle of Goreme village, most of the unique spots in Cappadocia were just a stone’s throw away. Right after lunch, we then hiked our way to the Goreme National Park.

With only a basic map on hand drawn by our hotel owner, we then braved our way to the mountains of Goreme with the aim of reaching Red and Rose Valley.

We spent almost three hours hiking–but mostly taking photos and videos. I was expecting some hot air balloons to be flying around somewhere too, but since we were there in the afternoon, we didn’t manage to catch them.

Goreme National Park wasn’t an easy walk at all!

I was wearing the wrong type of sneakers that day and kept slipping while hopping and sliding on top of rocks. There were a lot of steep uphills and downhills. And there were pebbled roads and muddy paths too.

With no GPS (and no cellphone signals), our “sense of direction” mainly relied on rocks which bore signs and instructions hand painted in red that says, “To Rose/Red Valley.” They usually appear every half kilometer, and if you no longer see them around, you are probably getting lost.

It gets scary at times if you don’t see any other people walking amidst the tall rock formations, bushy grasses and intimidating line of old trees. Trekkers don’t usually come in groups and you just walk pass them sporadically. 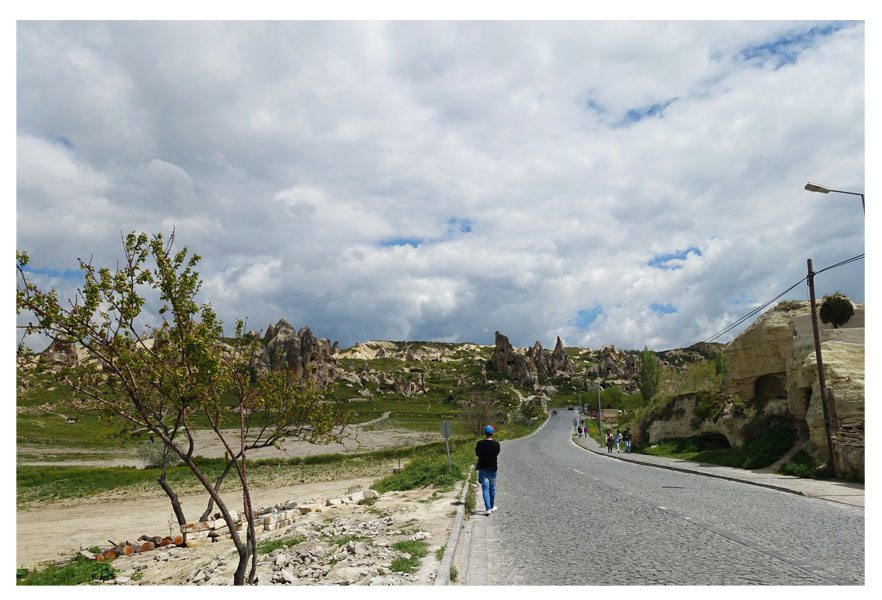 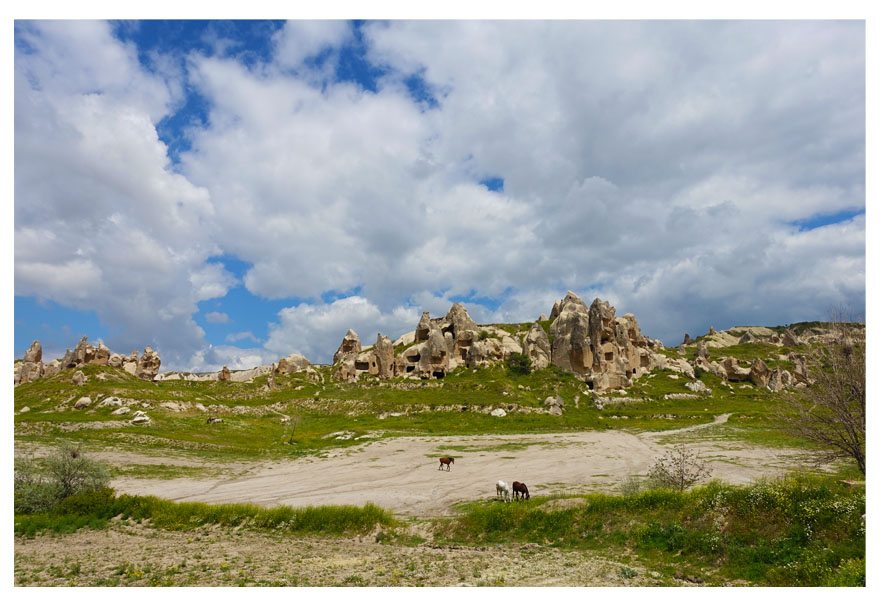 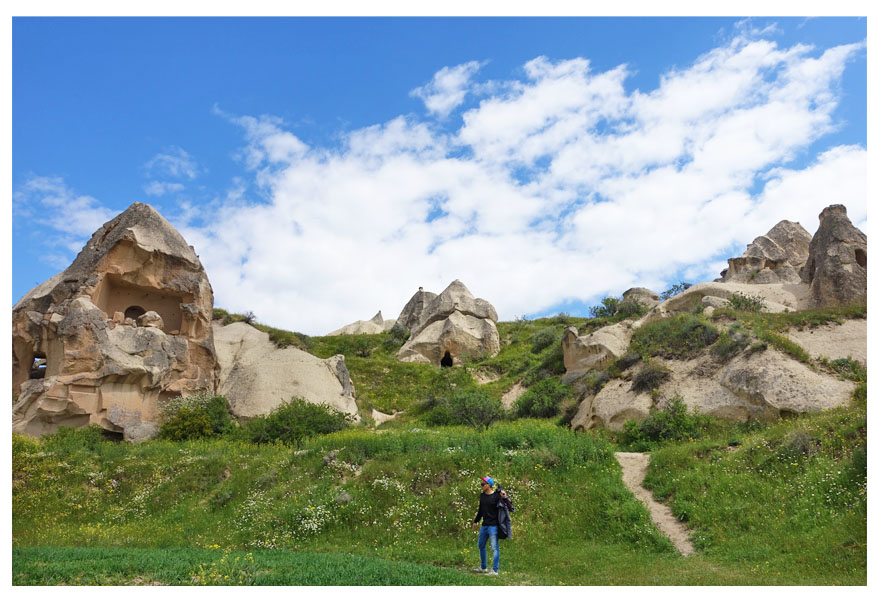 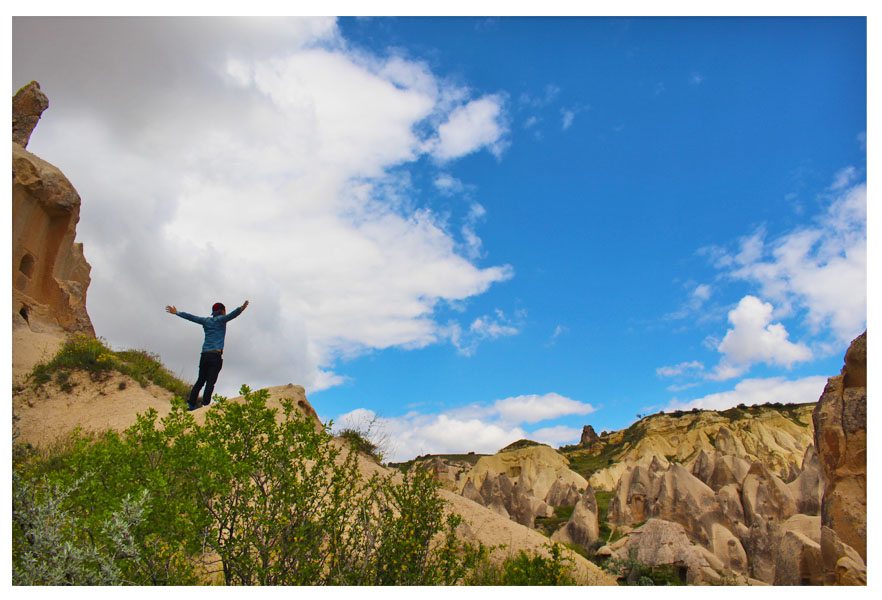 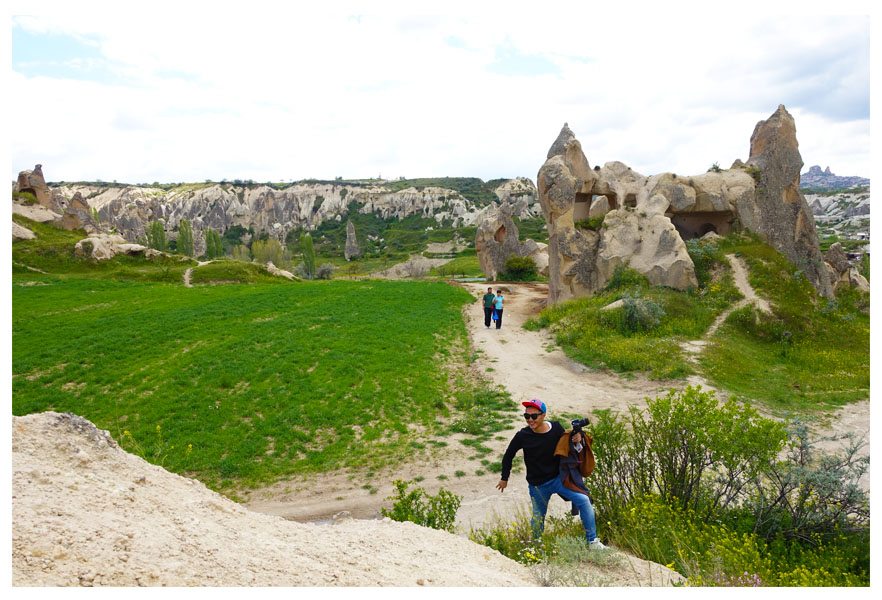 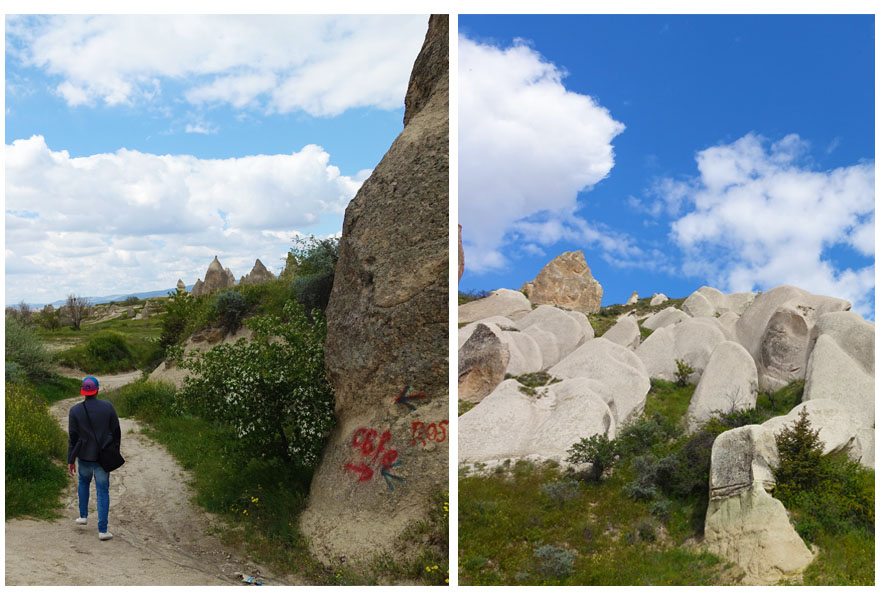 Rock churches, fairy chimneys, red-colored valleys – everything was just so picturesque! It was pure, natural beauty right in front my very own eyes.

When we already reached Red Valley at around 4 p.m., we thought of already heading back and returning to exactly the same path where we started instead of still finishing the whole trek. After all, we didn’t really know what to expect as well at the other side of the mountain if just kept walking forward. We didn’t want to get lost in the middle of nowhere too before sunset. 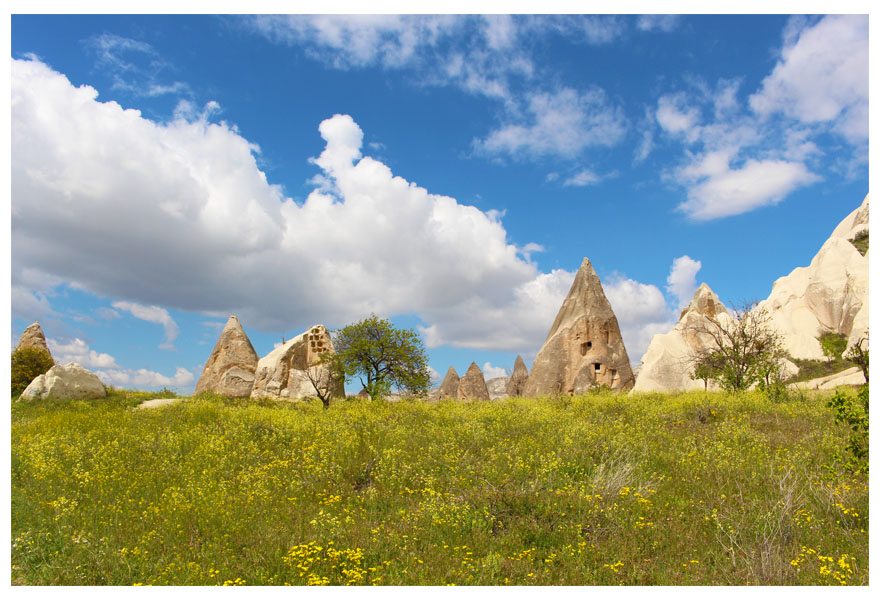 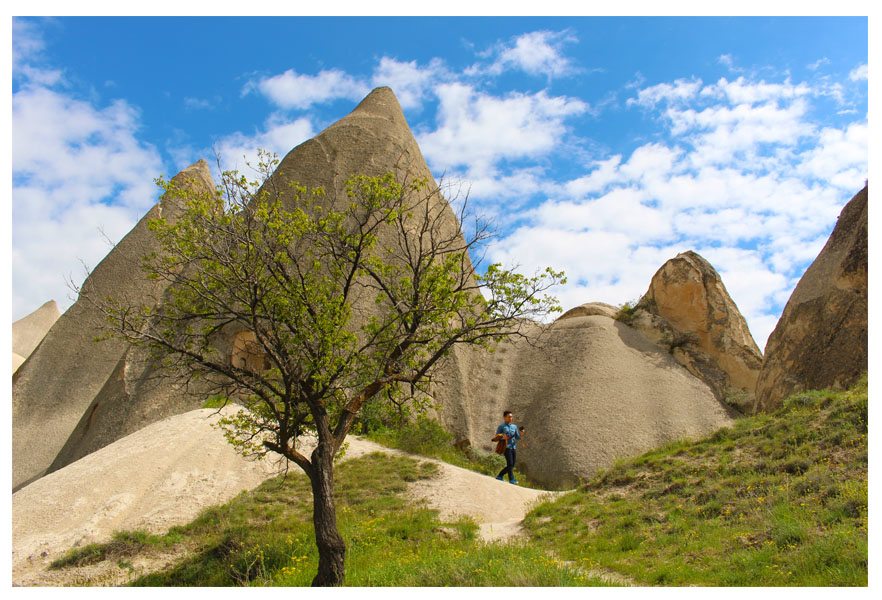 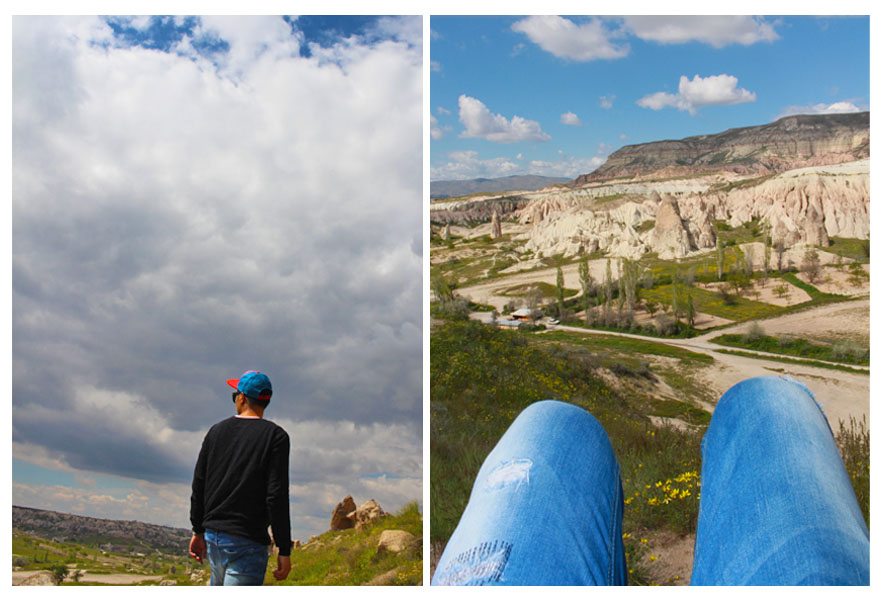 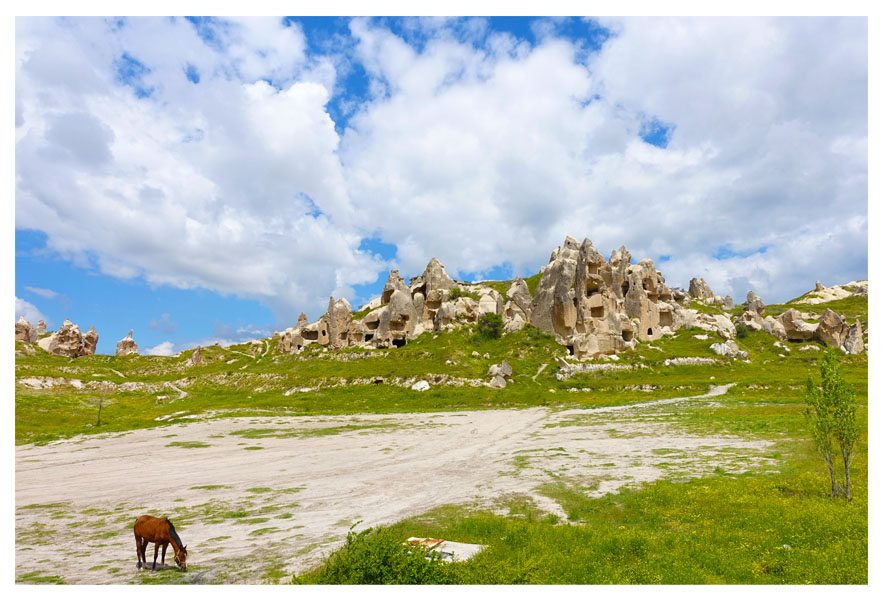 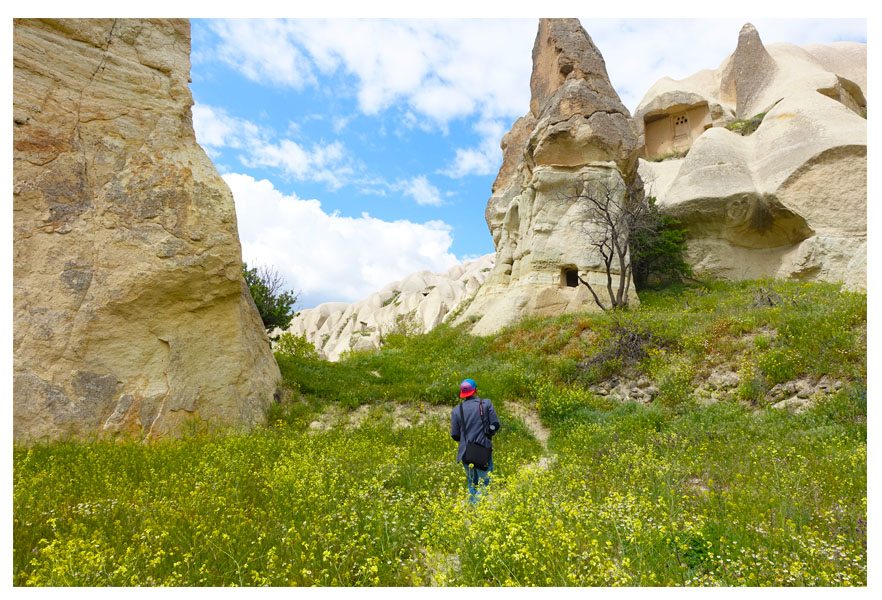 By around 6 p.m. we’re already back in our hotel getting ready for dinner. Time for a big chow after that long, long walk!

I’ll be writing my second day of adventure in Cappadocia soon. Hope you loved my post. Feel free to leave your comments and thoughts below. 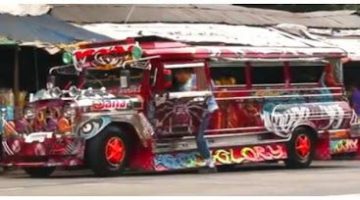