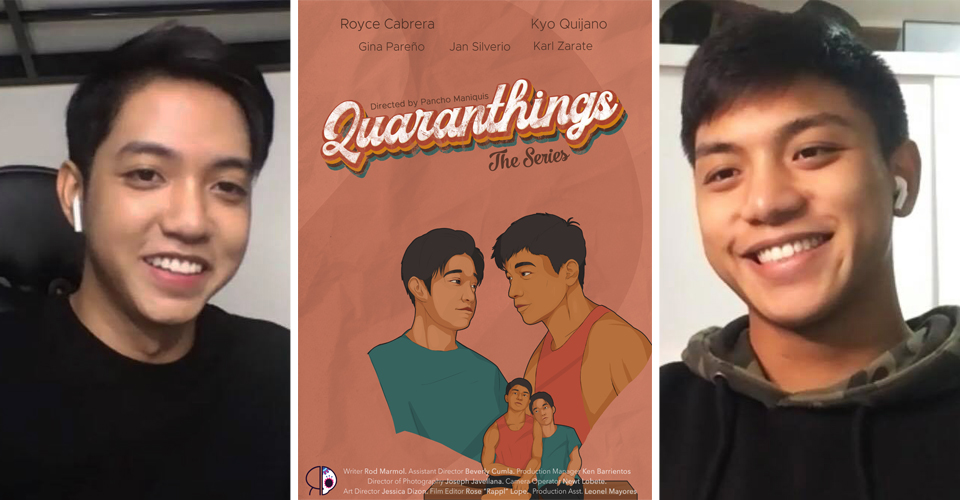 “Ang Quaranthings series ay tungkol sa friendship na mabubuo sa pagitan ng dalawang lalaki at ‘yung love na mabubuo nila sa gitna ng quarantine,” this was how director Pancho Maniquis described his project and one of the latest additions to the growing list of Boys Love titles this quarantine season. Quaranthings: The Series is the story of two people, in the midst of a shared existential crisis, when all they end up having is each other.

This pandemic has forced us to hit pause, placing us within the confines or our own four walls and allowing us to see who we are deep inside without the worlds we create for ourselves on the outside. This series is a reflection of our own experiences with a bit of romance, comedy, and drama.

Mostly known for writing hit digital short films like Unspoken Rules, Bakit Ka Single? and Bakit Ka Nag-Stay?, Direk Pancho makes his directorial debut for Quaranthings. Teaming up with him as writer is best-selling author, as well as writer and director of the hit 2019 film Cuddle Weather, Rod Marmol.

Quaranthings: The Series follows the friendship of two boys, and the love that will blossom between them while on community quarantine. During the lockdown, those who could, went home. All four housemates of Judah (Quijano) and Rocky (Cabrera) did. To each other’s surprise, they who’ve never even had a real conversation were left behind. Now they’re left with nothing. The overachieving and competitive Judah can’t go to school, while the hardworking and street-smart breadwinner Rocky is left without his various odd jobs. Unable to do the things that give them meaning, can they survive being alone together?

Joining Royce and Kyo are are veteran actress and Philippine Cinema icon Gina Pareño, Jan Silverio and Karl Zarate. Pareño plays Judah’s grandmother who raised him and his siblings while his mother worked as a doctor overseas. The character is described to be kind and caring by nature, but also very traditional in her beliefs. Silverio plays the role of Glenn, Judah’s former fling who has always had romantic feelings for him. While Zarate plays the role of Judah’s loud and ever supportive best friend, aptly named Beshie.

Get to know more about Royce and Kyo through these mediacon highlights. Also in the event is Direk Pancho Maniquis: