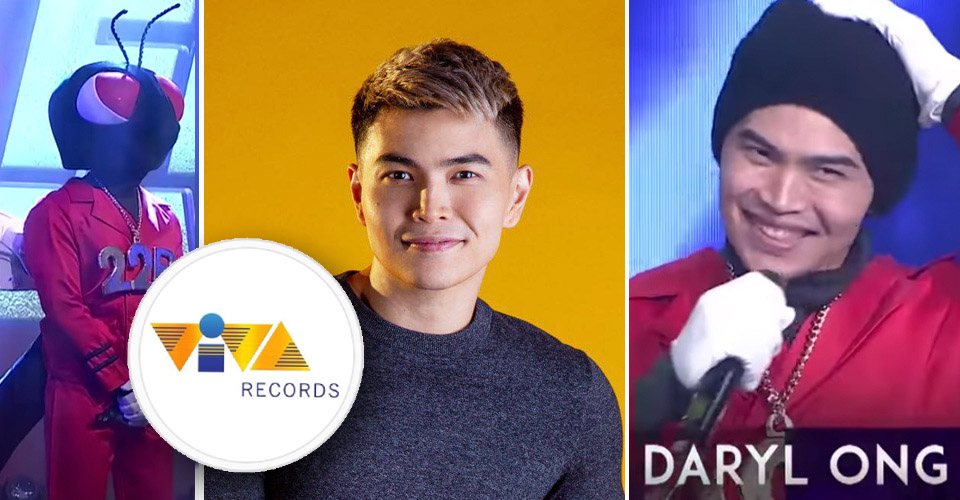 “Sobrang saya. Sobrang excited,” this was how singer-songwriter Daryl Ong described how he ended 2020 and kicked off 2021 on a high note. Through a press conference yesterday, January 6, the talented artist was officially launched as the newest artist of Viva Records.

Daryl has observably been on a roll since he inked a management deal with the record label. In case you missed it, he was named the first ever grand winner of Masked Singer Pilipinas on TV5 last December under the guise of 22B (a bee mascot disguise during the competition).

The singing competition is a local franchise of the American reality show that features celebrities performing songs while donning mascot-like costumes and masks concealing their identities. The show was hosted by Billy Crawford with the local panel of judges composed of Kim Molina, Matteo Guidicelli, Cristine Reyes, and Aga Muhlach.

Prior to the milestones, Daryl admitted having gone through what seemed like a phase of depression. This happened during the earlier part of the countrywide lockdown due to the COVID-19 pandemic. He shared his sense of relief from overcoming life’s struggles last year with Manila Standard entertainment editor Nickie Wang during the Q&A. He said, “Kaya sobrang laking blessing na pumasok ‘yung Masked Singer Pilipinas noong patapos na ‘yung taon. Wow, sobrang nag-dive yung 2020. Ngayon, parang nagkaroon ng buwelo ulit paangat.“

It was months after collaborating with Viva artist and powerhouse singer Katrina Velarde that Daryl confirmed joining the company. The two singers collaborated on original tracks “Love Me Now” and Christmas single “‘Tis The Season” (alongside other singers) in late 2020.

Interestingly, Daryl and Katrina were pitted against each other in the final round of Masked Singer Pilipinas.

Bagging the grand prize in Masked Singer Pilipinas is a testament to Daryl Ong’s vocal prowess. He told Random Republika that having won seemed like a reassurance or validation for himself an artist. “It felt awesome, especially the fact na hindi kami kilala or nakikita ng judges so ‘yung mga binibigay nilang compliments were unbiased. It’s a huge boost sa self-confidence,” Daryl said.

During the different stages of the contest, “22B” performed the songs “Kiss From A Rose,” “How Am I Supposed To Live Without You,” and “One Last Cry” for the finals.

2021 opened a new chapter in Daryl’s life as he joins Viva Records‘ roster of talents. “Artist-friendly,” he described the approach and management style of his new label. “I believe that there is always something new to learn in life and it’s the same with music.Viva Records opened up a new world for me to explore and I will make sure to make the most out of this wonderful opportunity. Expect original songs, and amazing collaborations soon!” Aside from sharing how he will now focus on songwriting, he also expressed wanting to become a record producer himself and work with fellow Viva artists, On top of his list of dream collaborations are Popstar Royalty Sarah Geronimo, The Juans, and rising rap artists.

Daryl’s tone as he gave a message for his fans was filled with gratitude and the yearning to give back. He said, “My message to all my supporters would be a message of thankfulness and love for supporting me and continuously believing in me and accepting me for who I am as a person and as an artist. I hope that wherever this musical journey takes me, they’ll be there to be my inspiration and strength every time I perform.”

Daryl shares his journey to signing with Viva and gives us an on-the-spot a cappella of Eric Benet’s The Last Time (his song of the moment):

Daryl details what it was like to perform inside a mascot costume. He also shares what his plans are for his animation career and BuDaKhel trio.