LOOK: Megan Young and Katrina Halili are ‘The Stepdaughters’ on GMA Afternoon Prime

When in Turkey: Turkish Delight, Baklava and Everything Turkish 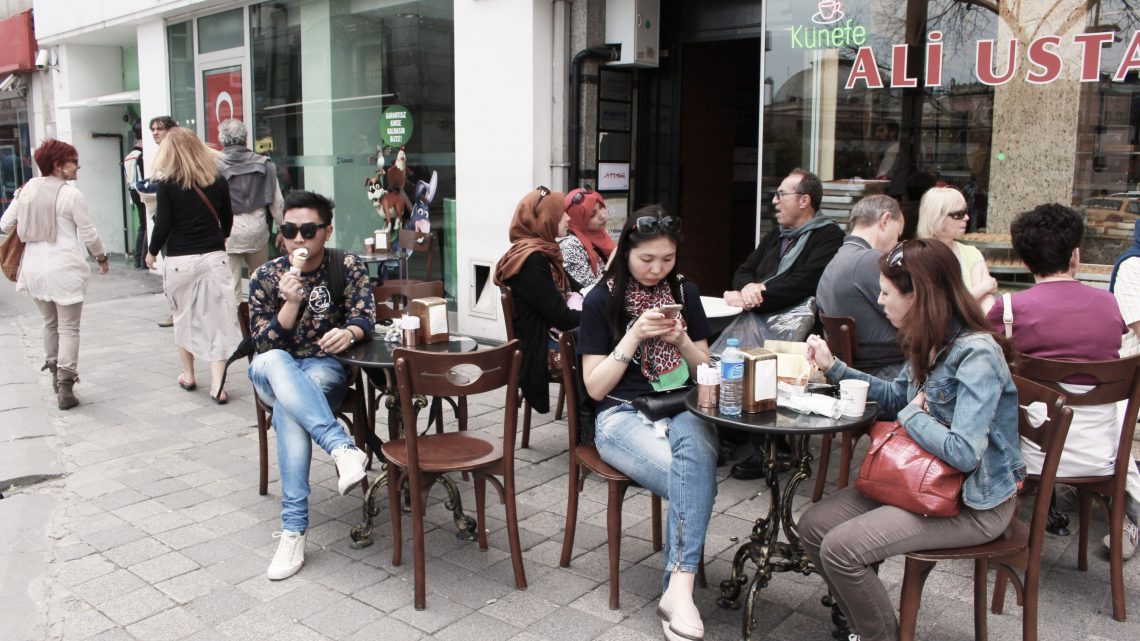 WHEN IN TURKEY, do as the Turks do. Eat local turkish food – and that’s the number one rule of thumb. From turkish delight, baklava, borek, kebabs to Turkish coffee, I just had to try each one of them.

I had my own fill, but it was always never enough. Spending nine days in Turkey will surely add a few pounds in your belly from the protein and carb overload.

But who cares? As long as your gut is happy.

From high-end restaurants, shop house eateries, hotel breakfasts, to streetside vendors, we foraged through the streets of Istanbul and Cappadocia in search for anything Turkish we can eat.

Chicken Doner Kebab: We were told that kebabs are normally made from lamb. Since we usually buy our kebab sandwiches from small stores we find in the streets, they turn out to be chicken, which is a cheaper meat-filling alternative.

Hafiz Mustafa’s Pistachio Baklava and Pistachio Chocolate Pudding: Built in 1864, this dessert house/cafe we ate at one light night in the Sirkeci – Central area was an ultimate Turkish dessert paradise! Of course we had to order all those with pistachios – something that’s unique in Turkish desserts.

Turkish Ice Cream: there’s something appealing about Turkish ice-creams; it’s never about the taste, but maybe more on how it is presented. With all the playful teasing before it is served to you, this just makes you want to crave for more. Not a fan of the Turkish ice cream in general though as I still prefer mine to be milky and creamy and not too elastic. 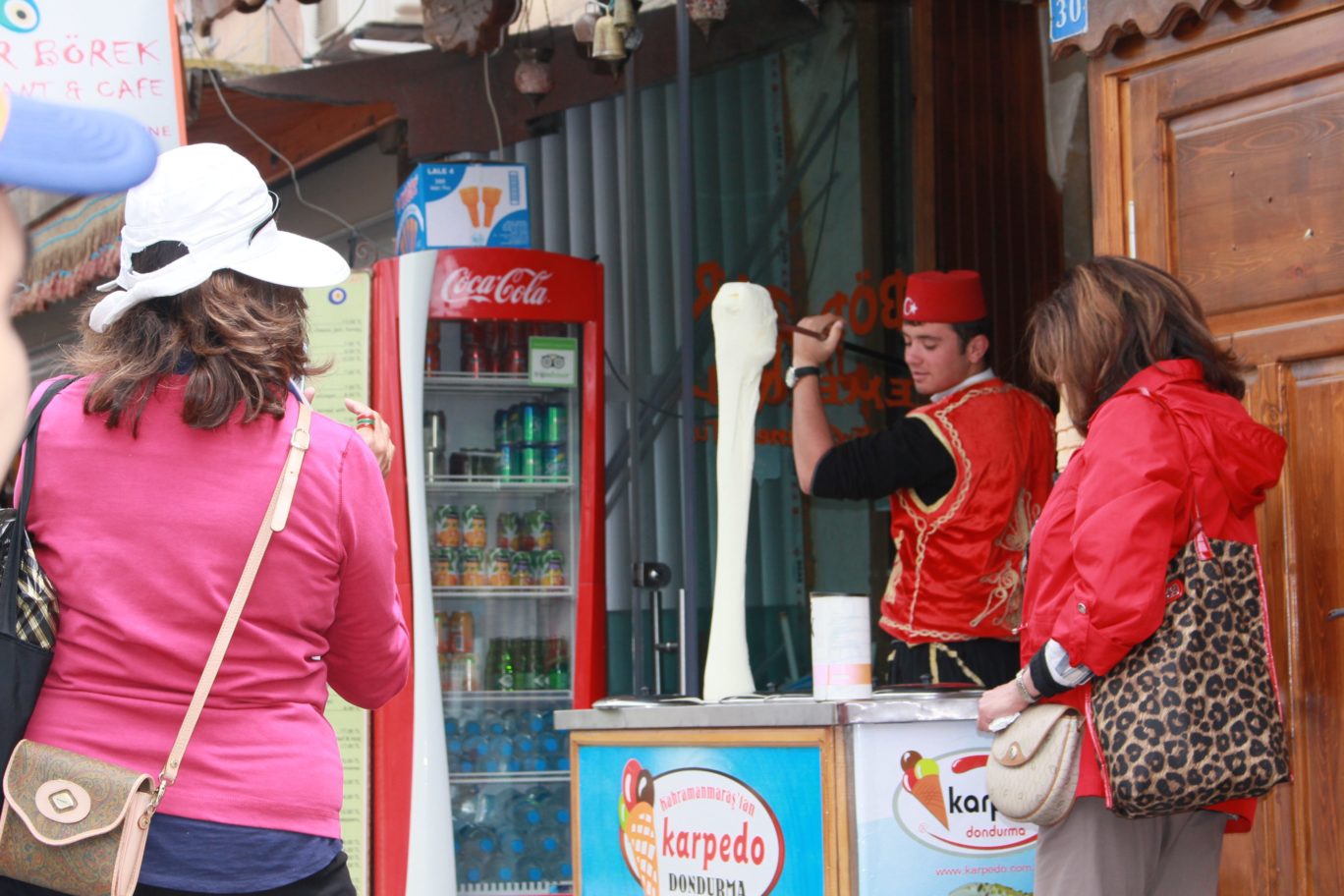 Turkish Coffee: Not a big fan of Turkish Coffee as well as I prefer mine to be sweet–and yet again–milky. Took my first sip, and I immediately thought this is not for me. It’s a bit bitter and at some point, a bit muddy in taste.

In all fairness, I tried it for the second time and ordered it somewhere else just to make sure it’s not just the cafe where I first brought it from. My second try was in Cappadocia, but it still tasted the same.

All forms of bread: I love bread! I’m a self-confessed ‘bread monster.’ In Turkey, you will be spoiled with so many choices for your bread. And you can eat it anytime of the day–with your morning coffee, with your mains during lunch, with your afternoon snack, and with your lamp chop for dinner.

Here’s a regular bagel I bought while queuing up in front of the Blue Mosque in Sultanhamet, Istanbul:

And then the chicken sandwich which we ordered for lunch in Cappadocia:

We also tried their beef kebab in wrap which is far tastier than the ones you can get in Manila:

This savory cheese puffed bread was our ‘appetizer’ before our main course arrived:

Fresh juices: Another thing I love about Turkey is how accessible the fruit juices are at very affordable prices.

And then you have the fresh pomegranate juices, one of the must-tries they say in Istanbul. They are more thrice as expensive as the orange juices, but they taste far healthier! Haha!

Cake Place: We also tried out Mado, a more ‘premium’ dessert shop/restaurant in Istiklal Street, Istanbul. They are famous for their ice-creams, but after eating so many baklavas and lokums the past few days, we opted for a slice of cheesecake instead:

Local eateries for home-cooked food: In the Philippines, we call them ‘karinderya’ while in Singaporean we call them ‘hawkers,’ here in Turkey, locals call them ‘lokantas’. They are small eateries that serve a variety of home-cooked dishes at affordable prices. We found most of them while walking around the streets of Istiklal.

We usually order a couple of veggies and one main meat. We were enthusiastic when we tasted how they cooked their lamb: it was so tender, it just melted in your mouth. And the best part is, their dishes were not overly seasoned.

(Note: try to look for the bread in this photo — see! you’re supposed to eat bread all day long and with every other local dish you buy)

Pottery Kebab: Fortunately, we discovered this unique Anatolian dish in Cappadocia. Not everyone in Turkey is familiar with this pottery-way of cooking your meat. It’s a unique style of preparing your dishes by heating your food inside a claypot and you will need to smash the pot open to reveal your cooked dish before putting it to your plate. We ordered some form of braised beef in rich tomato sauce and the taste was so delicious, it reminded me of my grandmom’s dishes back in Manila. This Anatolian/central Turkish dish very much resembles to the Filipino kaldereta. And it was definitely scrumptious!

This is Istanbul’s version of the same kebab dish. And it was as equally yummy as the one we had in Cappadocia. Although this one tastes more like a red sauce pasta with cheese, it was memorable as well nonetheless.

As for our top favorite, nothing beats the local Turkish breakfast. We never even complained about having the same thing over and over again. It was that good: healthy, light and pleasurable.

Prior to my trip, I initially expected Turkish food to be overly seasoned with spices, peppers and salt. But it was not as bad I expected it to be. It was just right.

I have a feeling that Turkish dishes and Turks in general don’t aim to impress people who are about to eat their cuisines and what they serve. There was a sense of ‘belongingness’ and ‘warmth’ in each dish, that it reminds you collectively that you are eating at the basic comfort of your own home. Most of them tasted home-cooked, even in big restaurants. It’s something that you will personally serve to your love one. 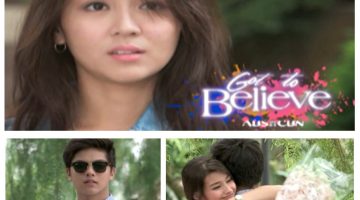