She’s Back: Marian Rivera is ‘Ynang Reyna’ in Upcoming Encantadia 2016 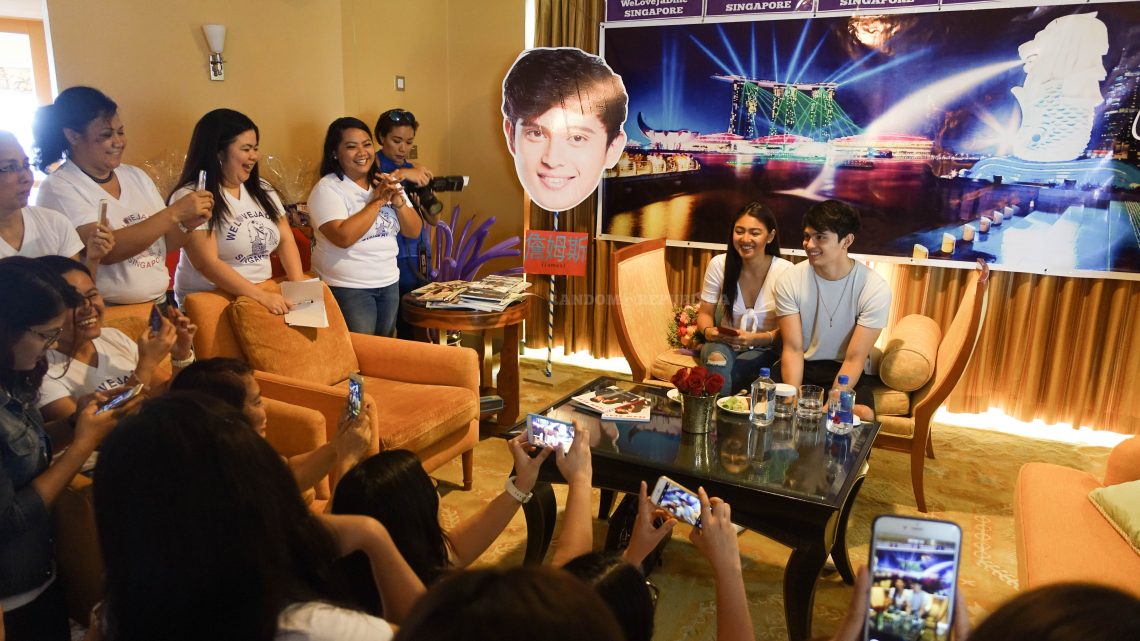 BREATHE IN, BREATHE OUT.

The minute I entered the Presidential Suite of Conrad Centennial Singapore that sunny Saturday afternoon, I can already hear the thrilled heartbeats of the 20 ladies from the ‘We Love JaDine Singapore‘ club that assembled that day for the exclusive meet-and-greet session with their favorite stars: James Reid and Nadine Lustre.

Ecstatic is merely an understatement — after all, you are meeting one of the most popular love teams of this generation.

For majority of them, it wasn’t their first time to see James and Nadine in person; some even flew back to Manila a couple of times to attend JaDine’s local concerts & events back home. But to be just a few inches away from this phenomenal love team — almost literally rubbing elbows with them — is nothing but a dream for any fan.

(I probably died screaming inside as well as I’ve been an avid #OTWOLista myself. And here I am standing inside the same room as they are. *breathe in, breathe out, dies*)

The opulent (and well, very expensive!) Conrad suite was well-decorated with JaDine-related items: purple-colored balloons with black-and-white printed memoir photos tied on the end of the strings; a backdrop tarp hanging by the curtains that showcases Singapore’s beautiful skyline with James and Nadine’s blown-up up cut-out photos floating on the corners; JaDine-themed cupcakes that were waiting to be devoured; and side desks that were filled with over a dozen of hot off the press ‘Team Real’ books. 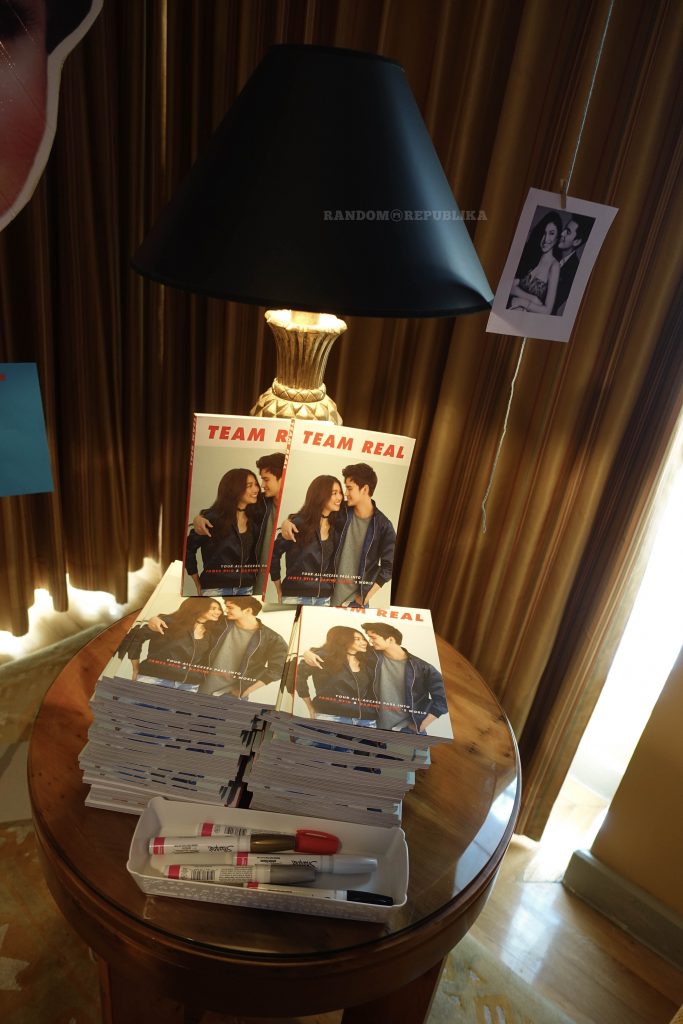 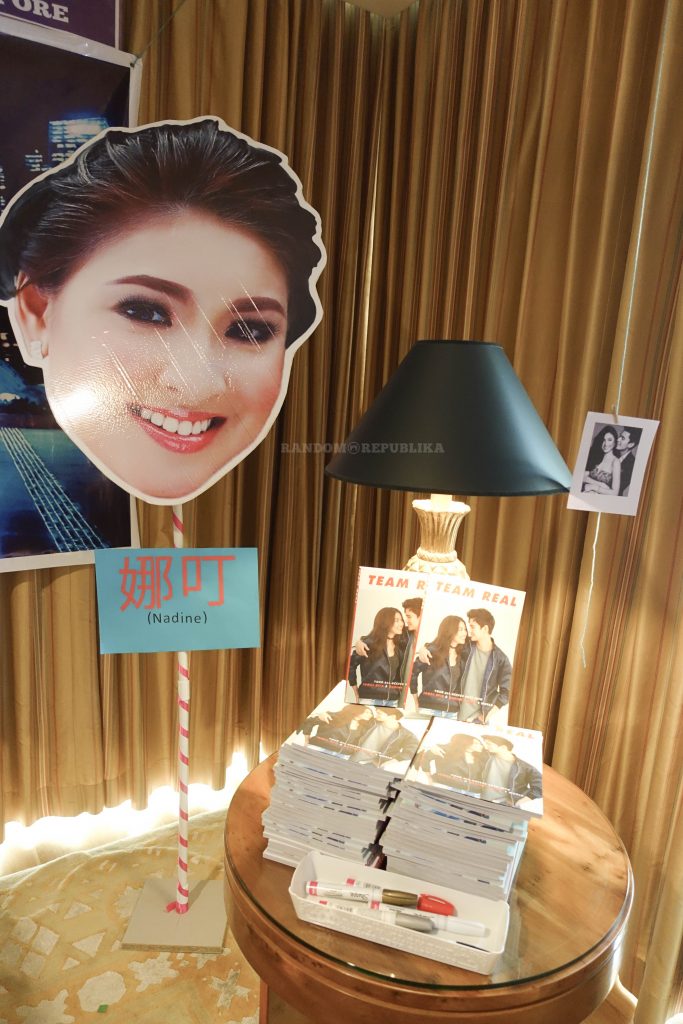 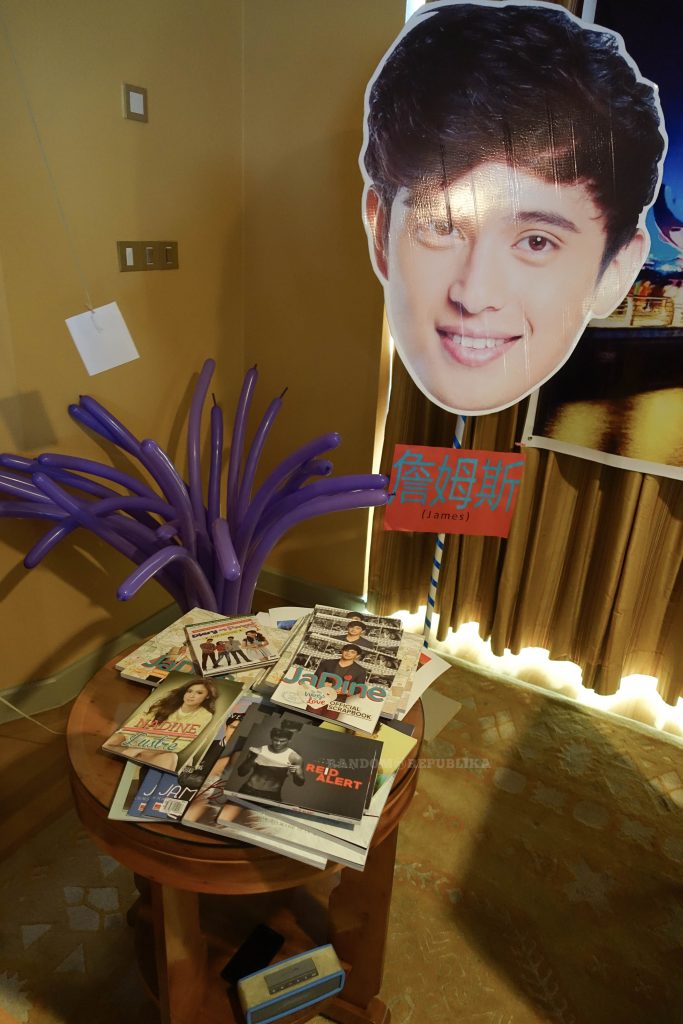 And then finally the two stars made their presence felt in the room: Nadine with her wide smile, and James with his modesty.

James and Nadine sat on the couch while everyone else sat on the floor which was at least 5 to 10 feet away from the couple. That was just at the beginning! Little did everyone realize that as the minutes progressed, everyone was slowly creeping nearer to JaDine. I almost wanted to shout: ‘GROUP HUGGG, ANYONE?’ 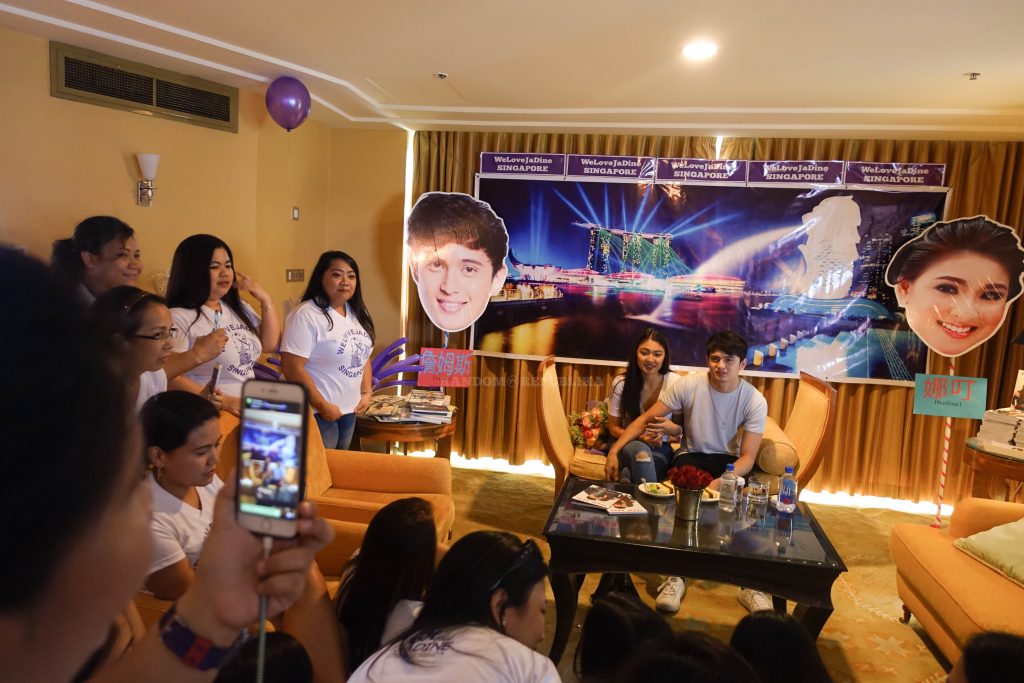 The highlights of the session were the short Q&A, ‘Team Real’ book signing, photo taking, and the couple trying out some local Singaporean delicacies such as the Malay kueh and Nonya egg tarts.

But what I believe everyone else enjoyed the most was the giving of gifts: bags of bakkwa (Singapore’s version of beef jerky), a limited-edition Barbie doll for Nadine, black leather Armani couple jackets, and a special photo album with a compilation of JaDine’s photos collected by the fans. 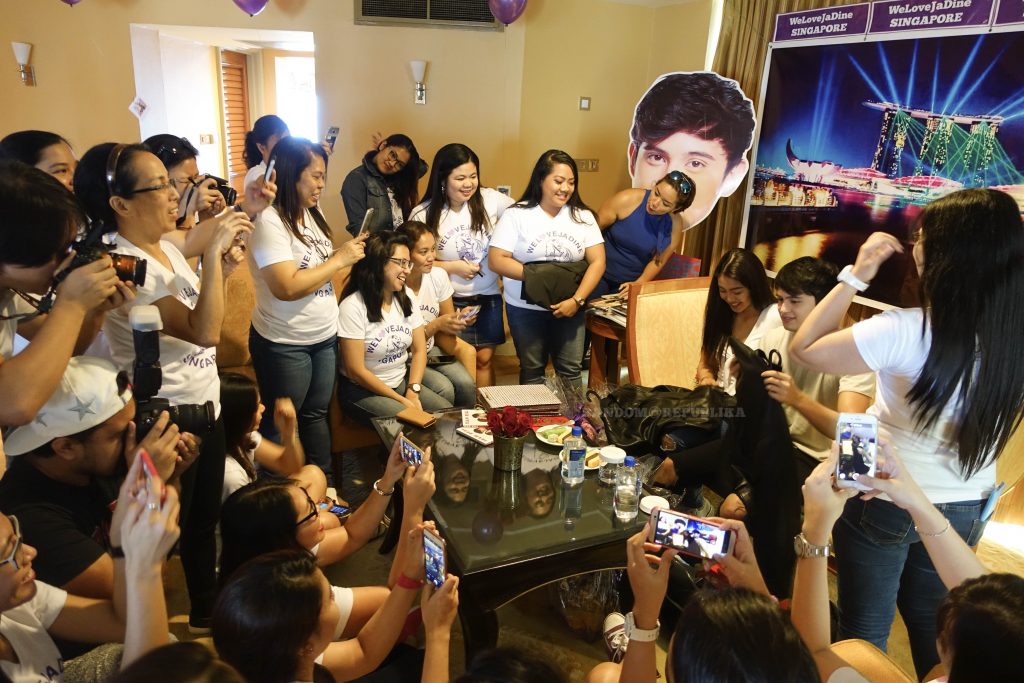 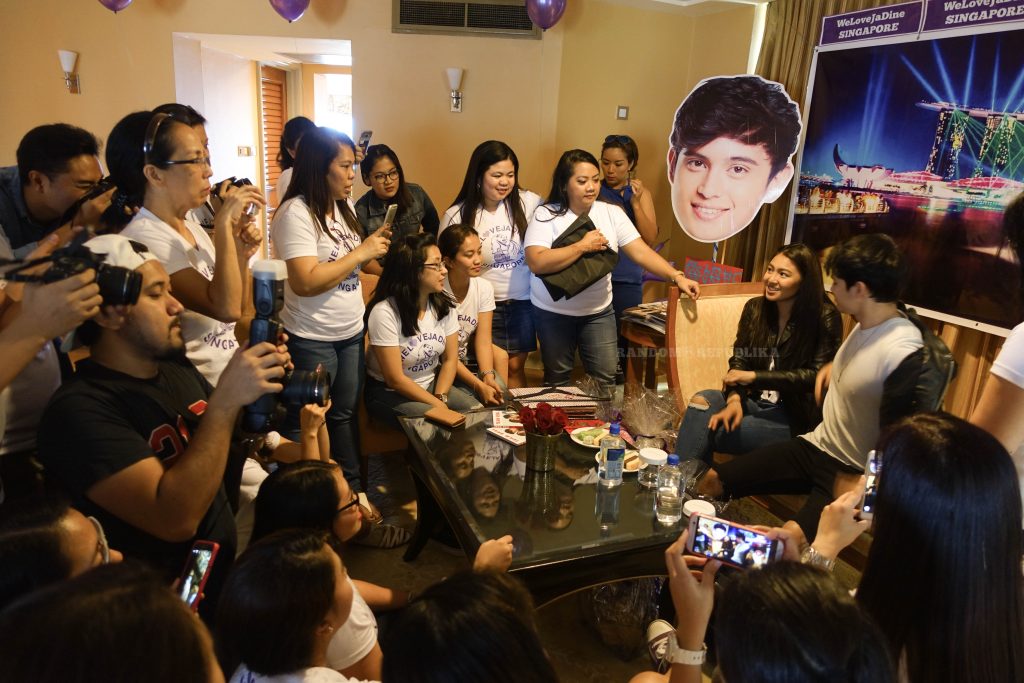 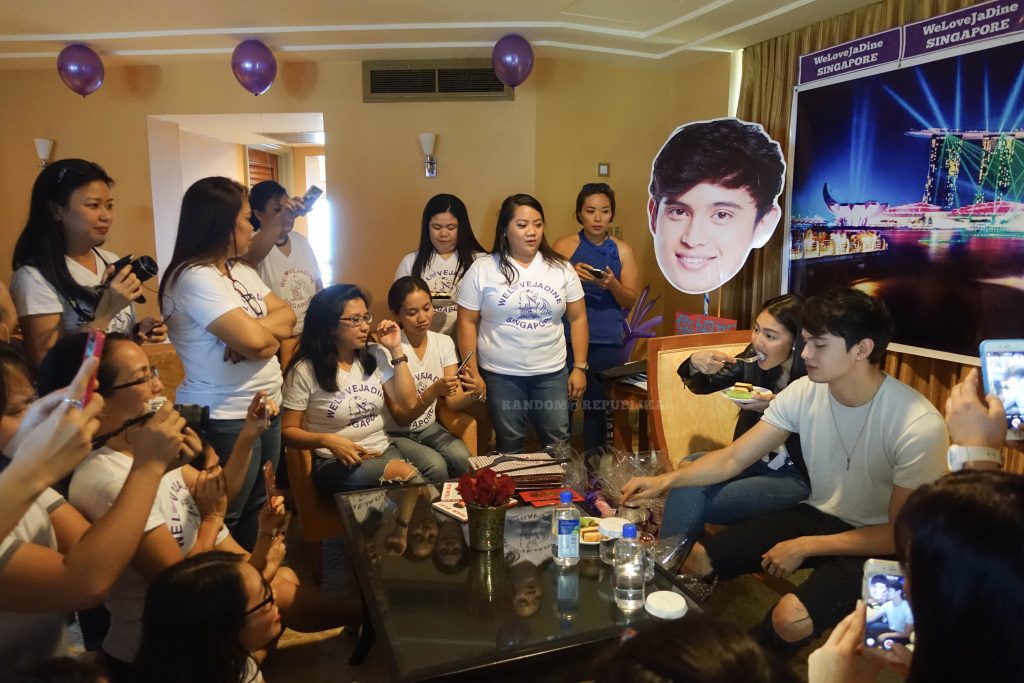 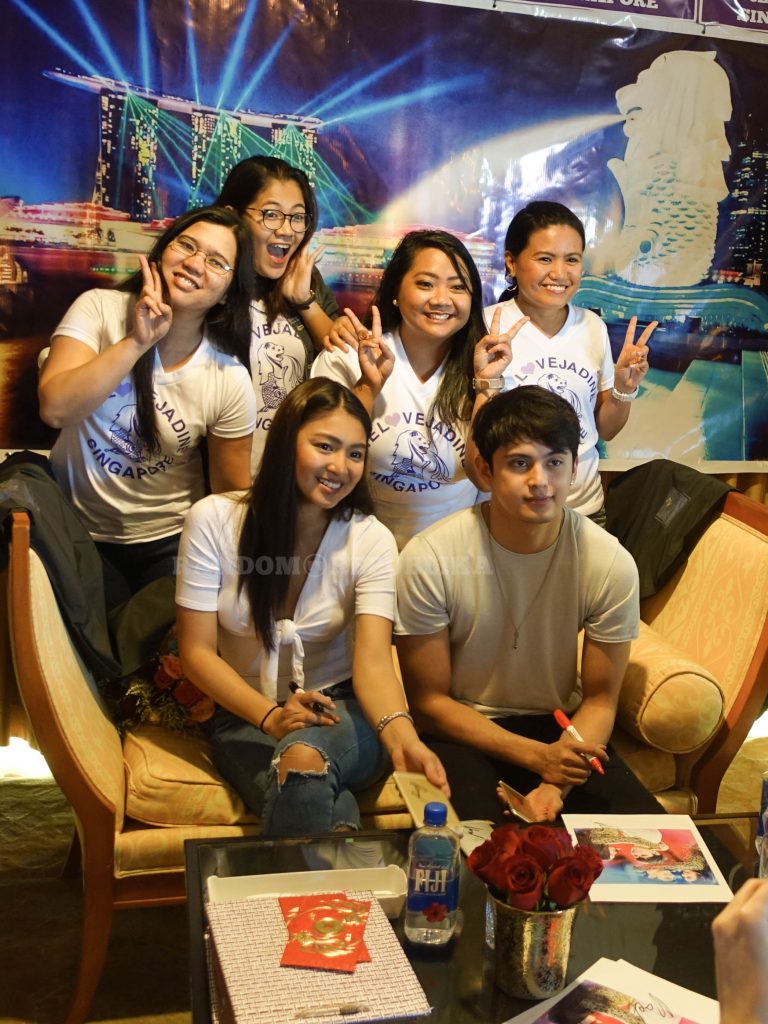 James and Nadine needed to bid farewell almost an hour later after hearing their tummies growl. Apparently, the couple hasn’t properly eaten a decent meal since they arrived in Singapore in the morning — and at that time, it was already around 5 p.m.

And as soon as they left the suite, everyone started shouting ‘OMG!’ Can’t blame them — that was one fun, up-close & intimate experience.

Katrina Banares, co-head of ‘We Love Jadine Singapore’ said that their eight-month old group was formed because of ‘On the Wings of Love’ and meeting James and Nadine has been the group’s collective prayer. Well, prayers get rightfully answered in due time, isn’t it? It’s as if someone up above was saying: ‘Achieve. Ikaw na. Diyos ko lord. Push!’ 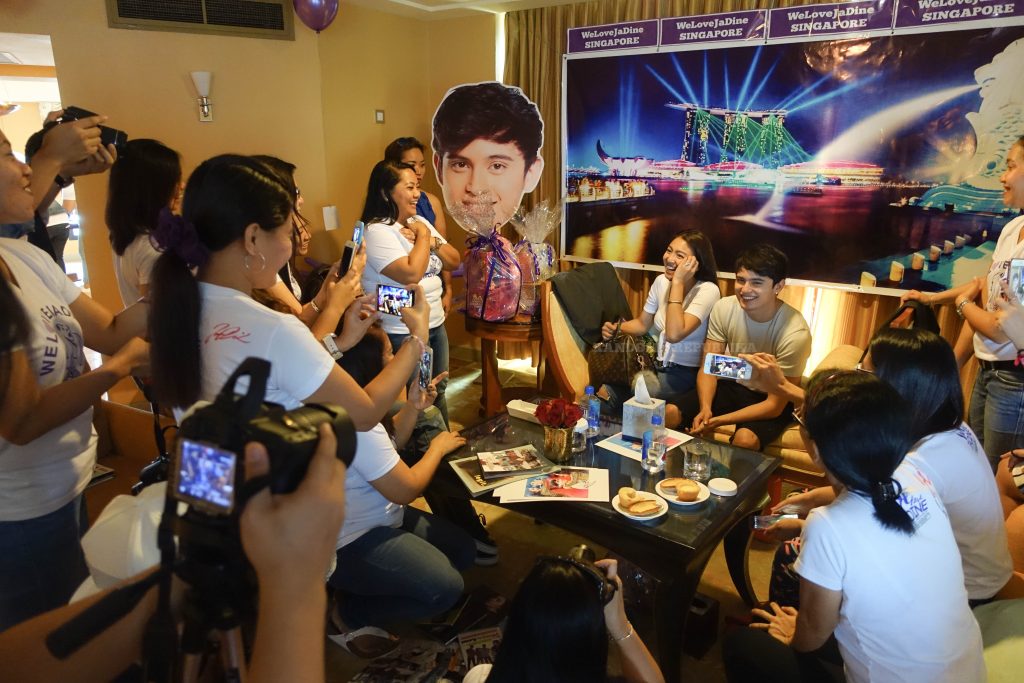 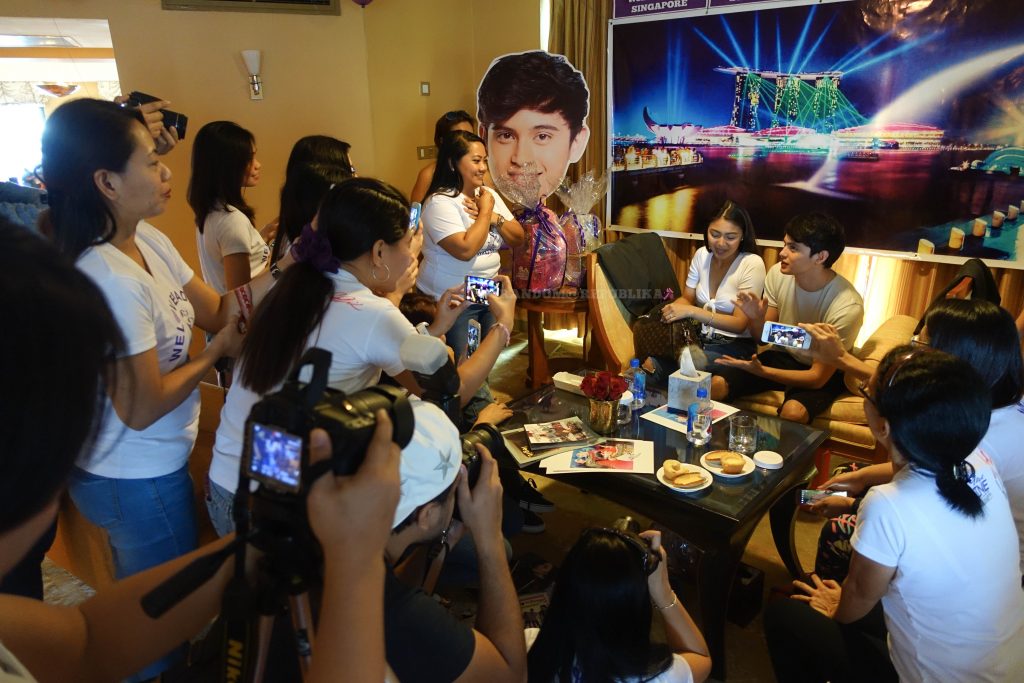 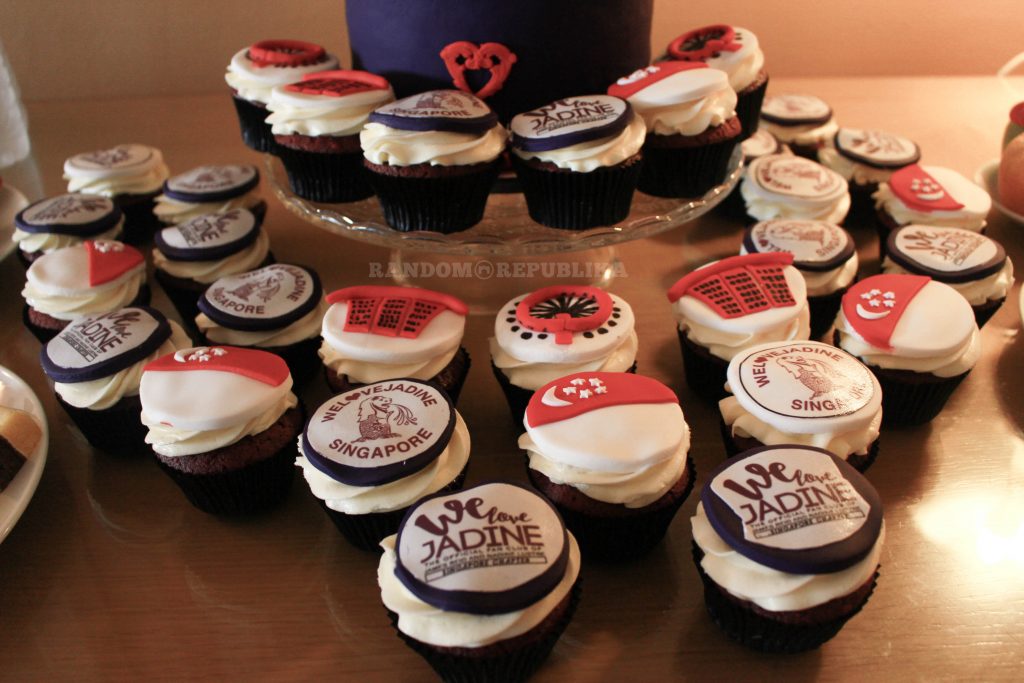 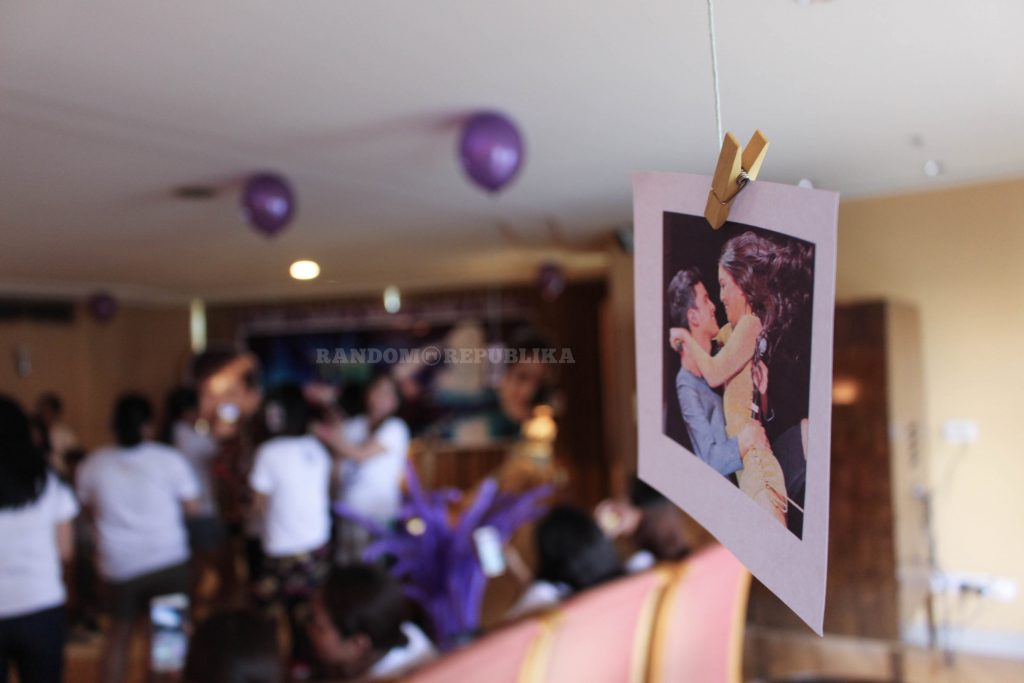 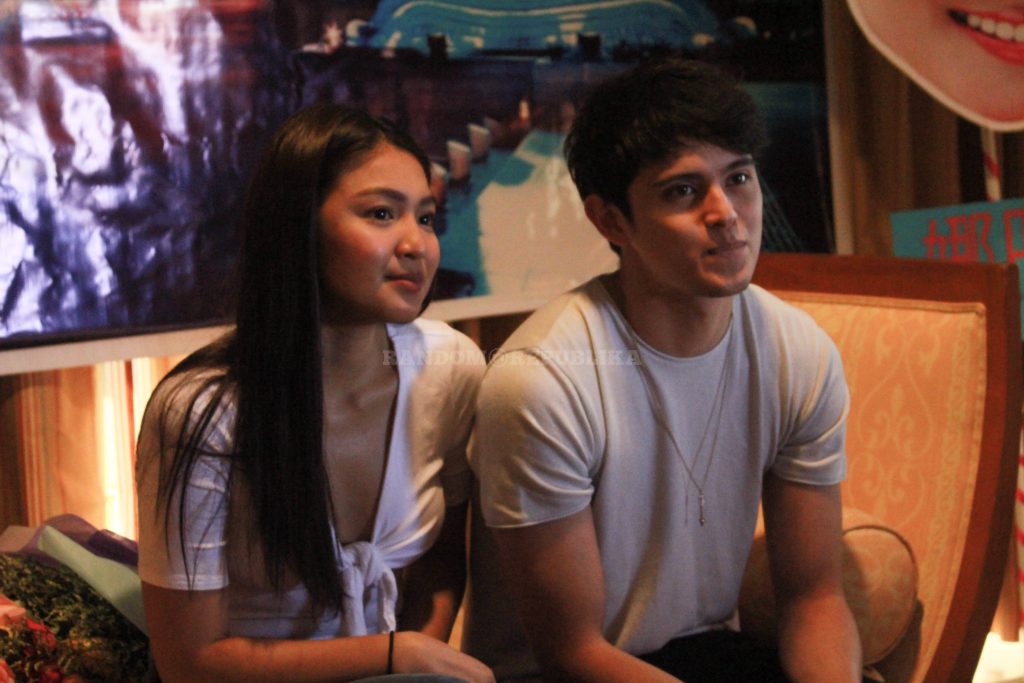 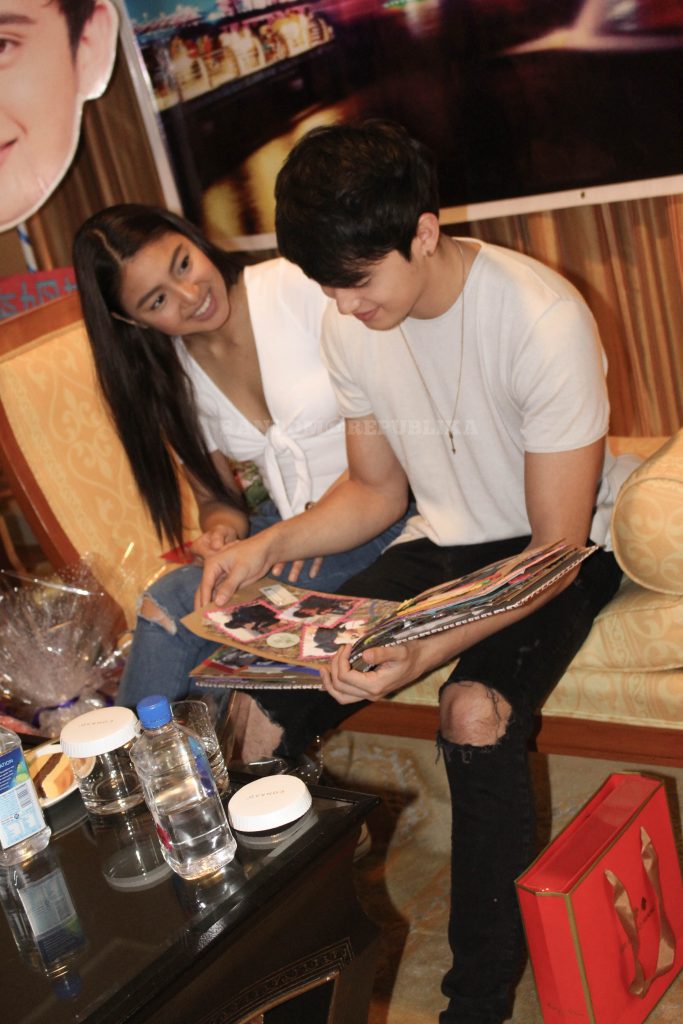 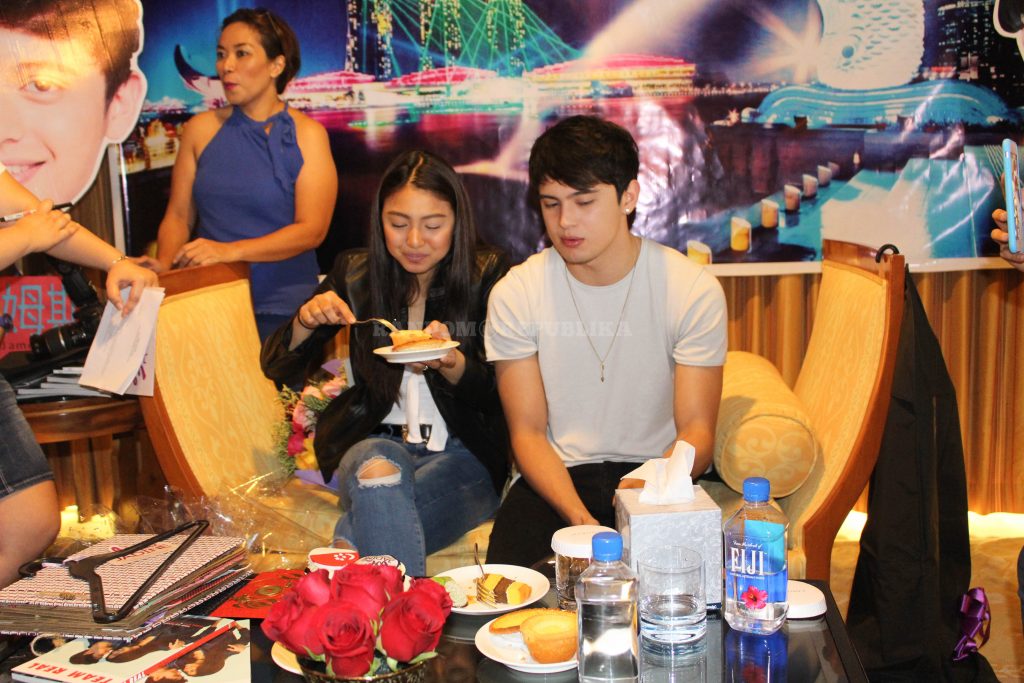 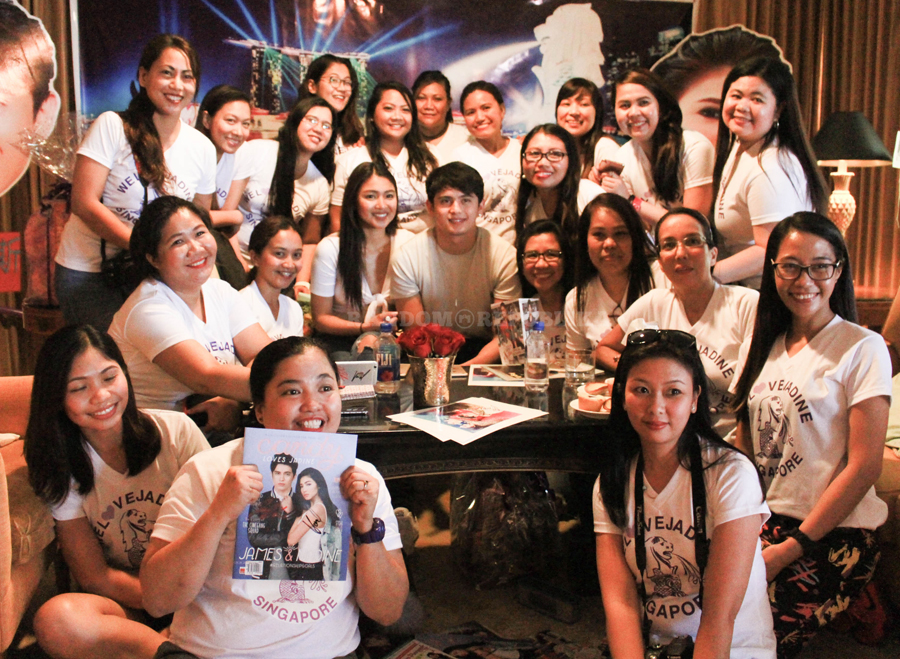 Watch this one-minute clip from the exclusive meet-and-greet session:

Special thanks to TFC Singapore and Hello Asia Singapore for helping us out with the arrangements. 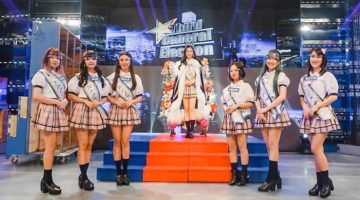