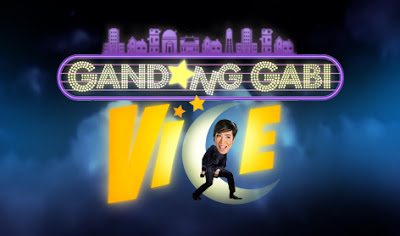 (Image: abs-cbn.com)
Gandang Gabi Vice (GGV) is set to air its final episode tonight. Since its launch last May 22, 2011, Vice has been keeping all Pinoys laughing on a typical, boring Sunday night. Sometimes, watching GGV will even possibly make you forget it’s the start of a dreadful workweek the next day…
Randomistas, here are our Top 10 most EKSAHERADANG special segments in Gandang Gabi Vice and why we think the show will be missed:
10. Ethel Booba makes a funny comeback
Winning conversation between Vice and Ethel —
Vice: “Ilang foreigners na naging boyfriend mo?” (How many boyfriends have you had in the past?)
Ethel: “Mga tatlo.” (About three.)
Vice: “Anu-ano ang mga nationalities… Romanian… ano yung isa?” (What are their nationalities? Romanian, what about the other?)
Ethel: “…dalawang Americans.” (Two Americans)
Vice: “Taga saan (sa America)?” (Where in America)
Ethel: “New York… yung isa sa Canada!” (New York, while the other one is from Canada.)
Vice and Ethel simply have an excellent, funny chemistry together. This segment is definitely one for the books. 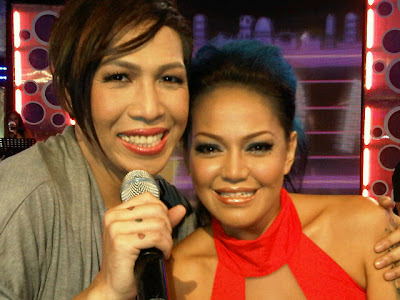 (Image: viceganda.net; to watch segment, click here)
9. Kim Chiu’s adorable laugh
You can’t stop giggling with Kim when you watch this episode. She was just purely enjoying herself, and it shows. Funny how Vice can make all his guests feel comfortable whenever he interviews famous celebs on GGV. 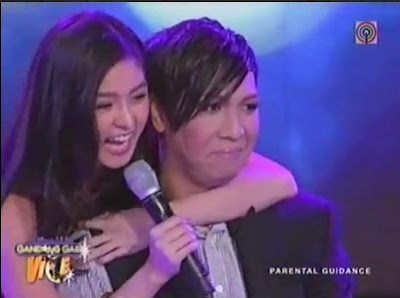 (Image: kimeraldwebsite.multiply.com; watch segment here.)
8. Afraid! Kean Cipriano and Xian Lim both run away from Vice
Kean is afraid of pigeons (or any birds, for that matter). While Xian is afraid of cockroaches. Where on earth will you ever find these uber hawt men running away in surprise and fear? It can only be captured on GGV. 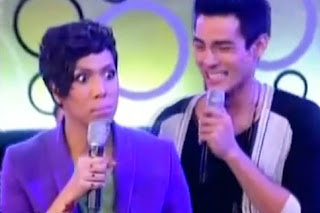 (Image: viceganda.net; watch segment here.)
7. Not all artistas admit their funny, simple flaws in public. But Gerald Anderson owned up to his.
Provoked by Vice, this gorgeous young man bravely admits that… he… farts a lot. Note from Gerald: At least, it doesn’t come out with any unpleasant smell. Similar to Vice’s reaction, we think any other fan would love to even capture those “gases” released to the air in a big plastic bag as a lovely souvenir from hottie Ge. ***wink*** 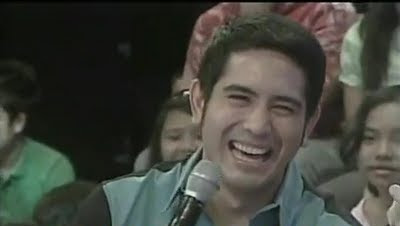 (Image:  tvseriescraze.blogspot.com)
6. Okrayan with the “Most Neat” hall-of-famer: Angelica Panganiban
Little did we know, Angelica has always been awarded with the “Most Neat” medal in school when she was younger.
Vice teasing Angelica: “Pinangako mo daw sa Nanay mo na — Nay di ako sasali sa quiz bee, wala ako makukuha sa Recognition Day, pero ako ang [laging] Most Neat.” (They said that you promised your Mom — Mom, I won’t join a quiz bee and I won’t get any during our school Recognition Day, except for the “Most Neat” award.) 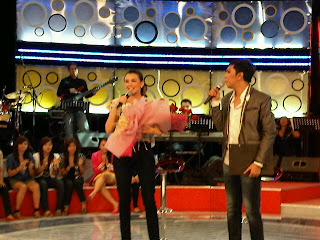 (Image: viceganda.net; watch segment here.)
5. Angel Locsin does a cool rap
Every Sunday night, GGV often ends up trending on Twitter. Thanks to artistas who come out of their comfort zones and do something unusual on television. Take Angel, for example. This drama princess does a one-minute rap which probably left a big smile on everyone’s face. 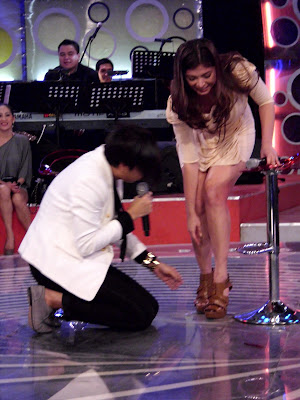 (Image: kapamilyaonesite.blogspot.com)
4. Diether Ocampo shows a little bit of skin
Aside from being funny, Vice is also excellent in another thing: flirting, teasing, and having fun with good-looking male celebrities. Diether just looked awesome during that episode. You could sense everyone drooling while Vice opens up a button on his tight shirt. We just wished he could have asked Diet to take off his whole top so that people can simply drool even more over his washboard abs. Wishing! 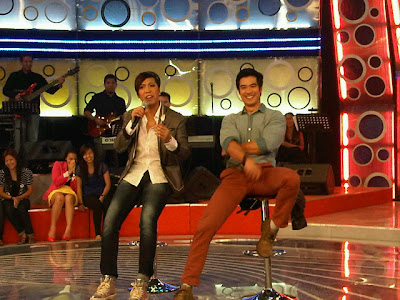 (Image: viceganda.net)
3. The “Donald Duck Syndrome” with Melai Cantiveros
Melai is known for her machine gun mouth and funny face reactions. Only Vice would have the courage to tease Melai as a Donald Duck look-alike in front of everyone and in front of Melai’s rumored ex-boyfriend, Jason. 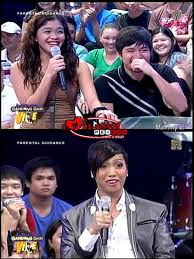 (Image: pinoyexchange.com)
2. Vice, Kris Aquino, and Dingdong Dantes all share the spotlight in a single episode
With someone as big as Kris and someone as hot as Dingdong (who rarely jumps over-da-bakod to appear on ABS-CBN), it must have been tough for Vice to give proper airtime and spotlight as he interviews both of them and to deliver his funny lines at the same time. Kudos to all three of them, it was one amusing episode. 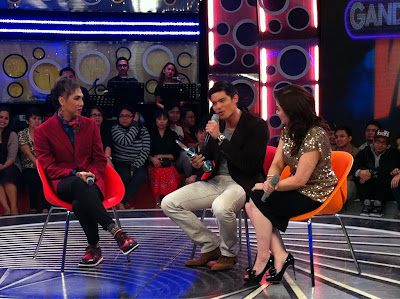 (Image: showbiznest.blogspot.com; watch segment here.)
1. Anne Curtis sings Alone / Toni Gonzaga sings ala Jaya and Jessa Zaragoza
The Annebisyosya Queen herself, Anne, sings “Alone” with her very best effort on GGV. The segment was the talk of the town right after that night. What’s funny is how Anne subtly touches her tummy (like a professional singer) while singing… Biritera! Humuhugot from the diaphragm! 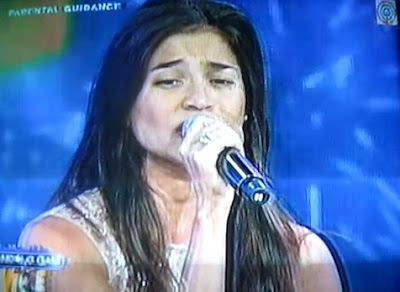 (Image: youtube.com; watch segment here.)
One of Vice’s closest friends, Toni, appeared on GGV too! Apparently, Toni has hidden talents. She can mimic Jaya and Jessa Zaragoza pretty well.
Toni and Vice’s combo on stage is a runaway WINNER! They just compliment each other. 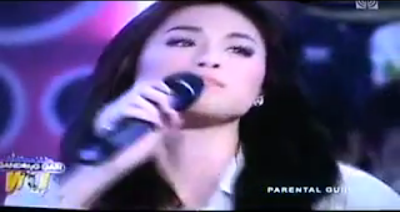 (Image: youtube.com)
It’s a pity ABS-CBN decided to stop Gandang Gabi Vice. But we genuinely think it’s also better, so that Vice can help focus on making his other show, “It’s Showtime,” a more competitive noontime show.
Not to worry, Randomistas, we heard from the “grapevine” that GGV might have another season in the near future.
In the meantime, our Sunday nights will be entertained first by Sarah Geronimo via her new variety show, “Sarah G. Live,” which will replace GGV’s timeslot.What’s your top eksaheradang moment in Gandang Gabi Vice?
See also  SINGLES ALERT: SPEED DATING 101 with Cherir Life Events

Due to insistent public demand, it was announced last night during the supposed GGV finale that the ABS-CBN management decided to continue airing Gandang Gabi Vice! No more three-month wait! Catch GGV’s first episode for Season 2 on Sunday, February 26!:) 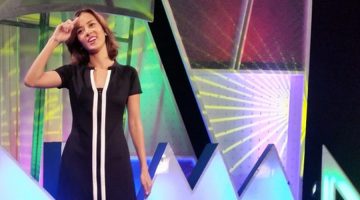