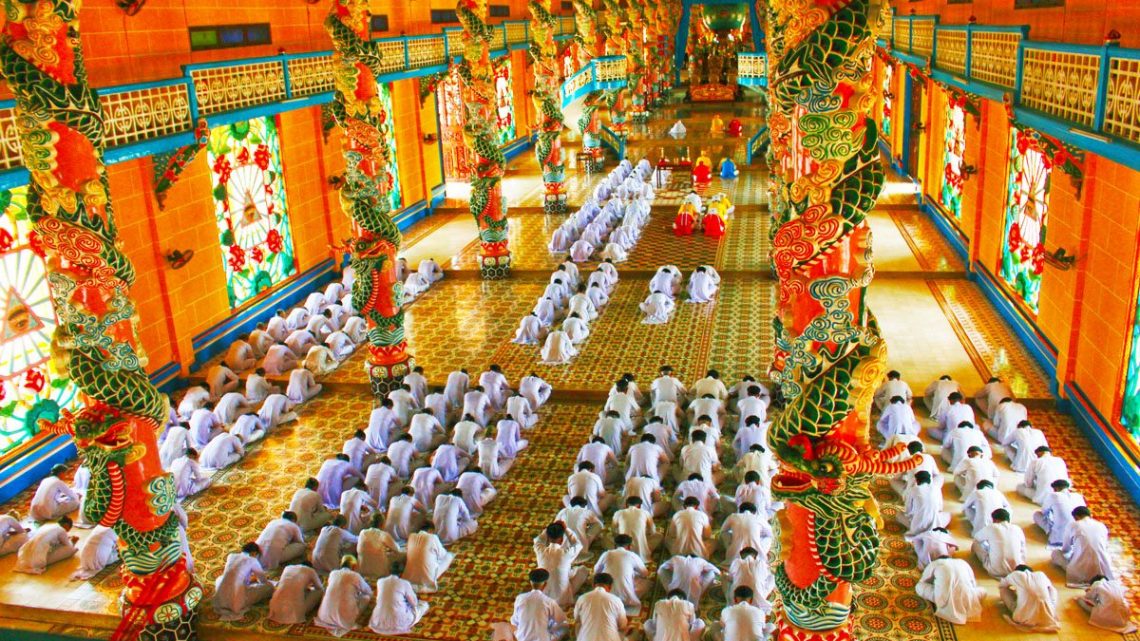 Woke up with a game face that day. I knew we were up for one big adventure: ditching a $25 big tour group for a public commute to our destination located in “we don’t know where.”

I asked my hotel concierge how to go to Cao Dai Temple from Ho Chi Minh City (District 1), but all I got was pure discouragement. “Very hard to go there… tourists wouldn’t know the way,” he says. My instinct told me to ask all-knowing Google instead, but the solutions offered were as confusing as well. We relied on whatever information we got from online forums, pieced them all together, and took our chances.

FROM SAIGON TO CAO DAI TEMPLE:

At most points during the trip, I almost felt like making a detour back to the city.

The experience was uncomfortable and nerve-wracking. The local buses were overly packed and it gets sweaty inside as the air-cons weren’t fully functioning. The buses stop anywhere they want – to fetch passengers waiting by the streets.

I remember the bus stopping for a 10 minute break at a small streetside eatery as the driver and his assistant needed to go to the loo while the passengers alight as well to purchase sugar cane juices.

There were lots of honking going around, deafening and numbing, from all the motor bikes and buses passing by. To add to the enigmatic dissonance was the Vietnamese ballads playing on the radio. The unique cacophony was a cultural immersion on its own, coupled by the dust in the breeze which gave us hours of unwished-for “grimy facial” while I stick my head out of the windows to get some air.

The locals came more prepared though, with their jackets and masks on covering themselves from the mix of all the pollution.

I was holding on to a tourist brochure—which had the image of a church and its worshippers wearing white robes as they bow before an altar—and smacked right in the middle of the front cover was a typography which read: Cao Dai Temple.

Almost every half an hour during the trip, I kept asking the bus ticket assistant and the passengers on both my left and right (just to be sure!) if we’re already anywhere nearby and we get varied responses in return, from finger pointing to mix versions of words such as ‘no,’ ‘far’ and ‘just wait.’ Most Vietnamese are challenged to converse in English (especially for those who are staying outside the city), but the consolation is, they try their very best to help.

By the time we reach 2 hours into our journey, I was already in panic alert. You see, half of the bus was already empty. I was trying to decipher my location by getting clues from the addresses painted in front of the street-side stores.

Finally at around 12:10 p.m., the bus assistant summoned us from our seats and instructed us to alight right before the next traffic light — pointing to the temple’s gates erected on the left side of the street.

Alas, we arrived to our destination! BUT to our dismay, the front gates were already closed as it was already the start of the noontime worship.

A local motorbike driver offered to take us to the other side of the temple (which apparently was a short walk from the main gate) for VND20,000; there’s no point in hesitating, so we rode on his bike. 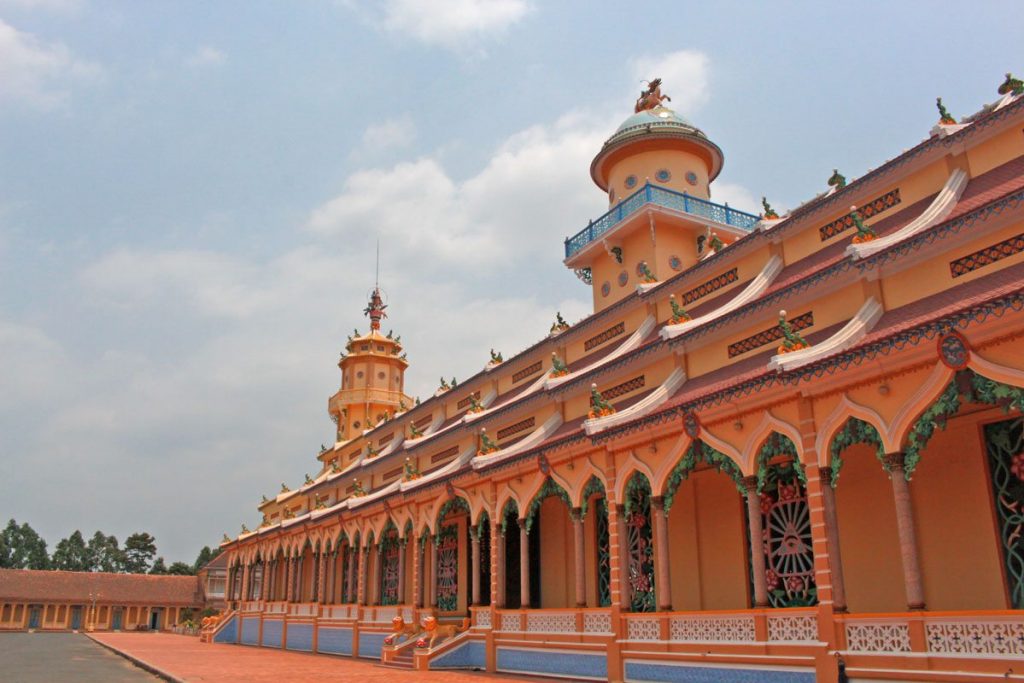 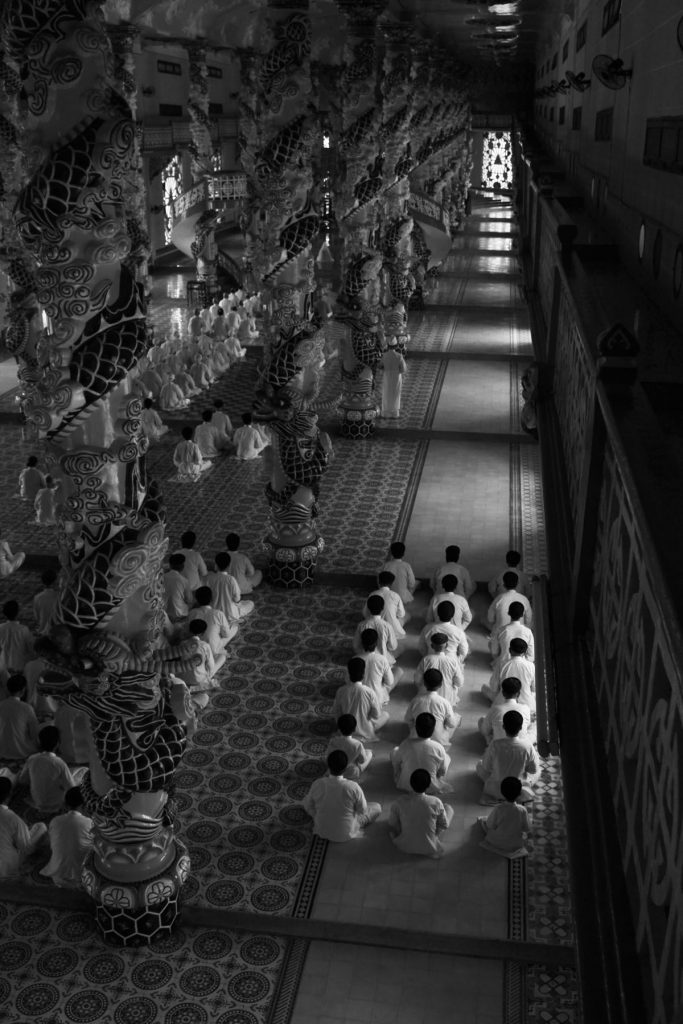 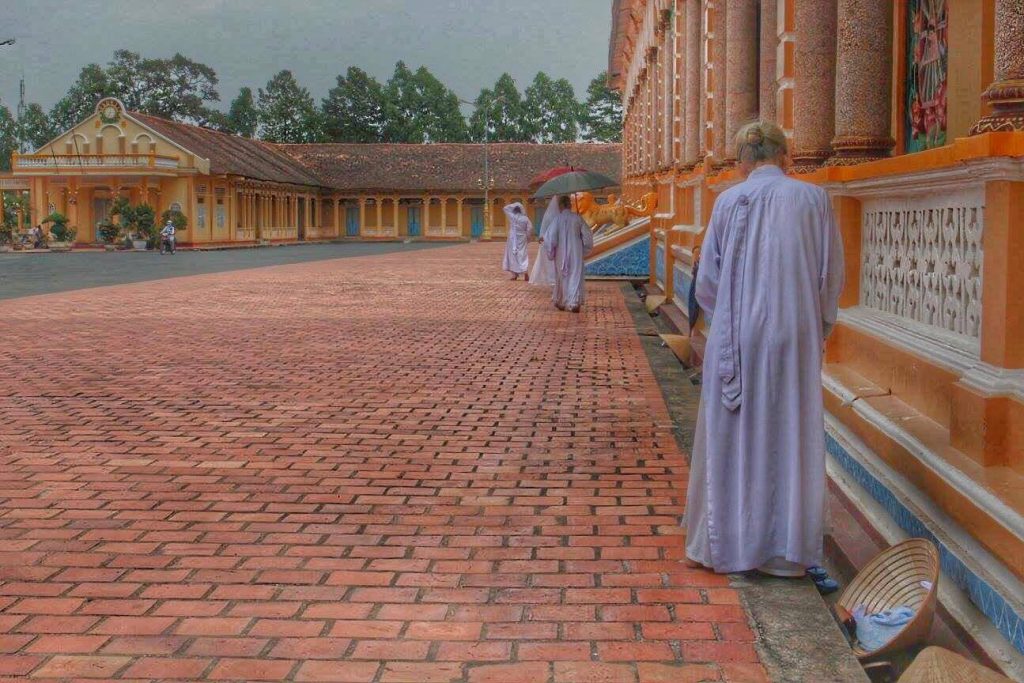 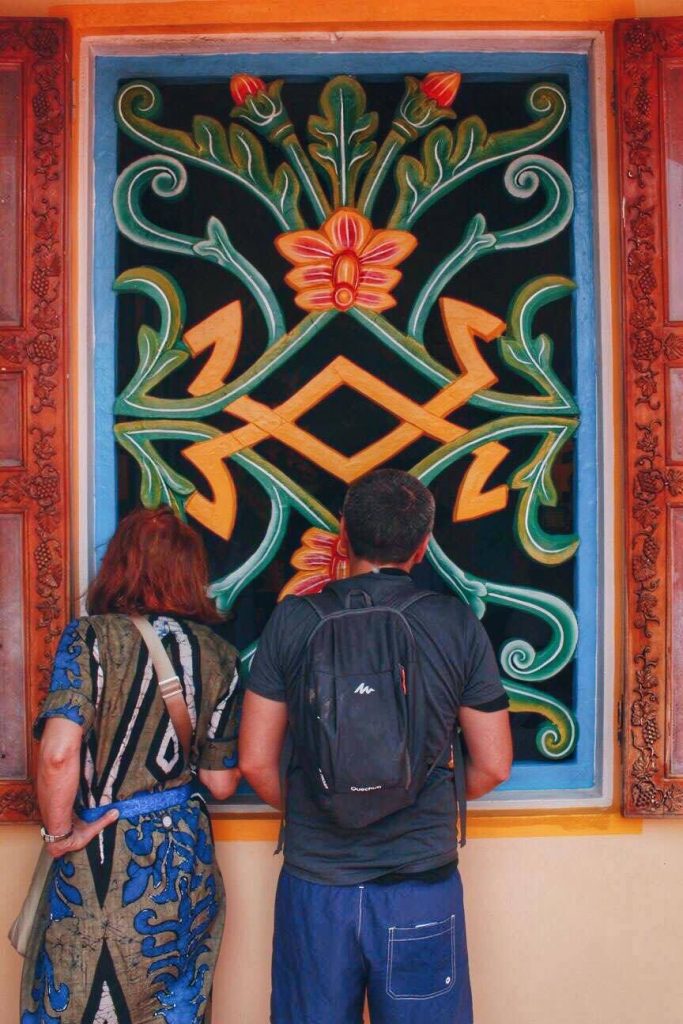 Inside the temple were about close to 50-70 worshippers dressed mostly in white robes while sitting down in the colorful marbled floors. There were a few men in yellow, red and blue robes which we assume take higher roles in the cult.

The insides of temple were intricately designed and were baffling in most parts: the all-seeing god positioned at the center, dragons wrapping the house pillars, and pastel-colored roofs and walls adorning the interiors.

Did I just say I just saw the worshippers of the ‘all seeing god’? The realization just kicked in while writing this post. I’ll end my story-telling at this point, and nothing more. It was more of a cultural exposure anyway. Hello, Lady Gaga’s children. 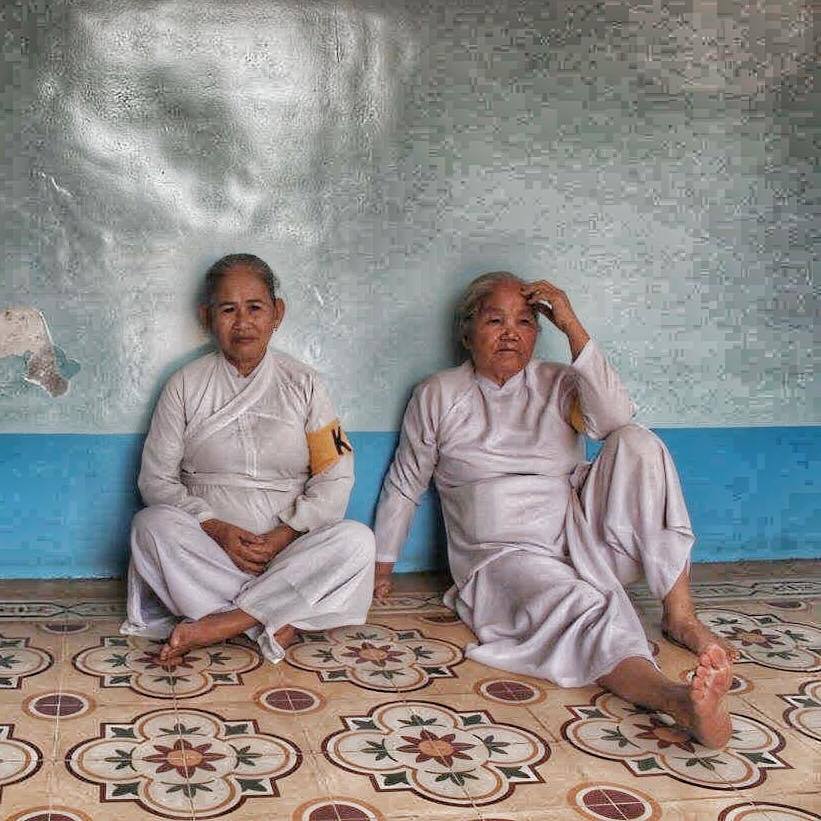 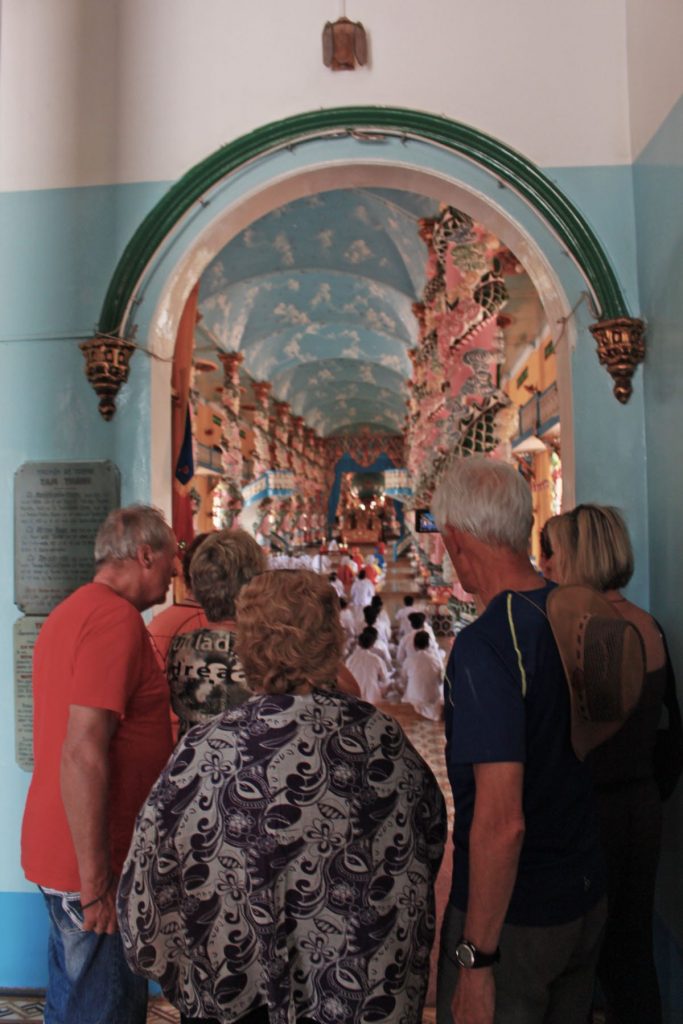 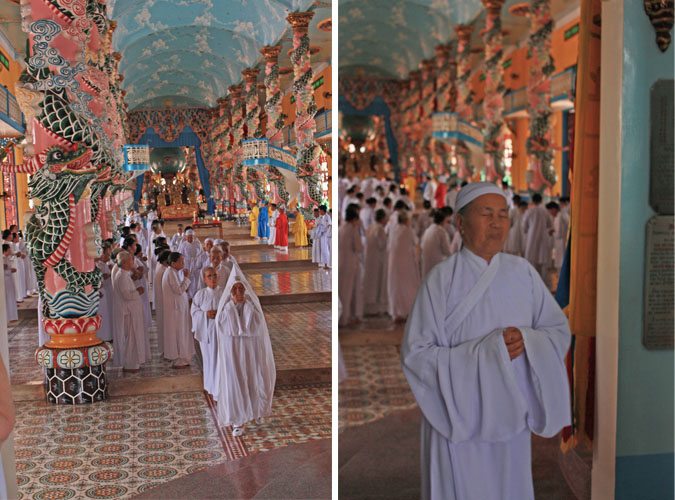 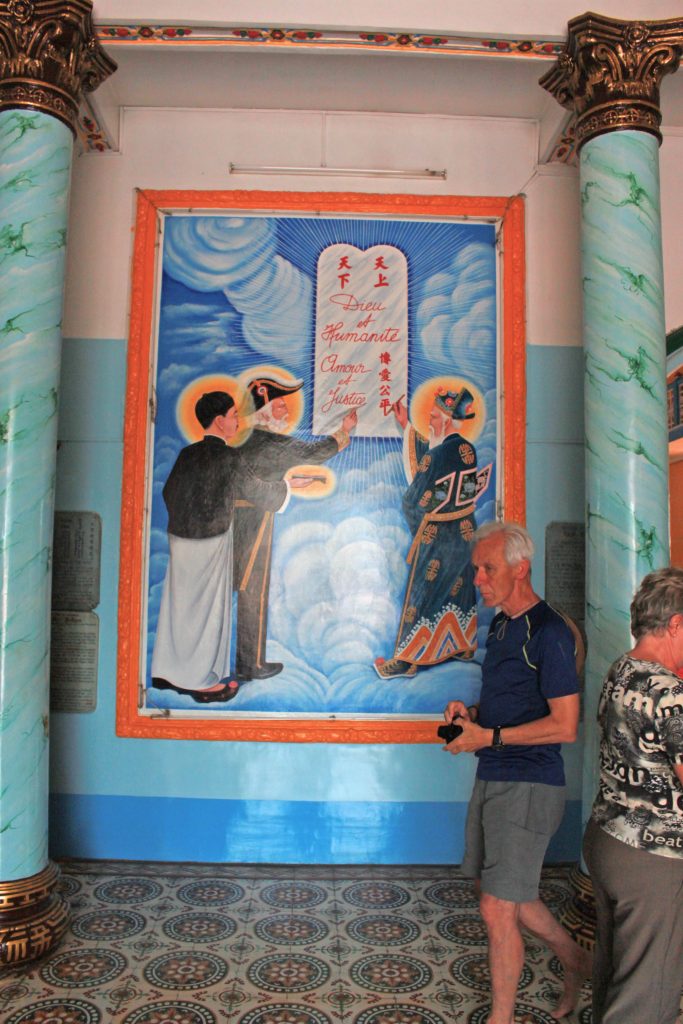 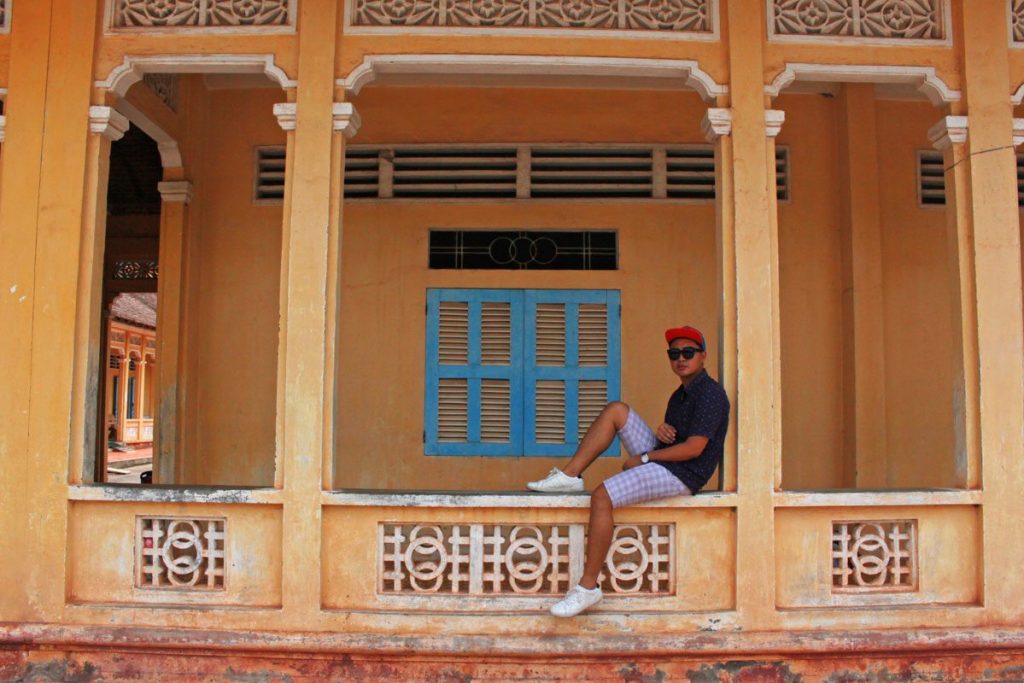 While waiting in front of the Cao Dai Temple for a bus to take us back to Cu Chi and then back to Ho Chi Minh City: 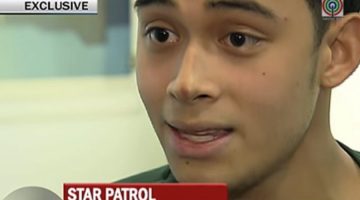